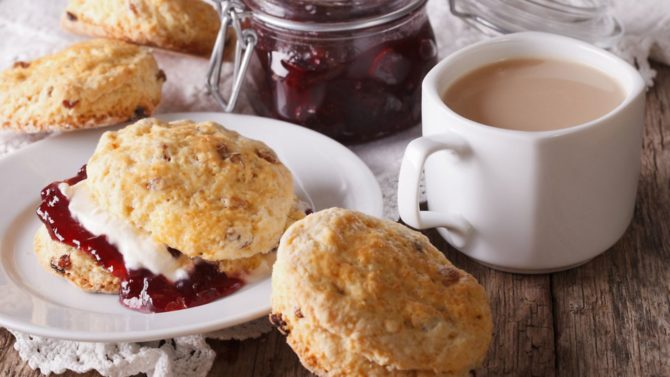 If you’ve moved to France, you’ve probably started integrating into French life and adapating to the products you find here. But there will always be those little things you miss from the UK. These are some of the common British products you won’t find in France

The French prefer their coffee so supermarket shelves are laden with different brands of coffee, from coffee beans to instant coffee, but you’ll rarely find a good old strong black tea to brew a mug of builder’s. You’ll find earl grey and ‘thé noir’ but nothing like the strong black Yorkshire stuff.

Don’t panic, you can, of course, find kettles in supermarkets but you might not find them in your neighbour’s house. Many French households will have a coffee machine but will use the stove or – shock-horror – the microwave to boil water. Also hotel rooms rarely provide kettles and tea bags…

There is no such thing as pickle in France, so forget ploughman’s sandwiches. Plus there are many other condiments that you won’t find in France such as mint sauce, horseradish or brown sauce.

These are the things we miss most about France

Some specialist supermarket have started to import ‘international’ products and so you will find some UK products but often in small portions and at expensive prices. Cheddar is one of those, only sold in small packs and often just one type (mature). But for all those who like their cheddar extra mature or with fruit or nuts, you’ll have to stock up on the other side of the Channel.

Although the word ‘bacon’ is actually French originally, you won’t find the juicy, thick-cut back bacon like you do in the UK. Instead, you can find slices of ‘lard’ which resembles streaky bacon or round slices of ‘bacon’ with no fat; so, not bacon.

The French have tasty quiches and loaded tarts but they can’t quite do pies like in the UK and you can dream on if you think you’ll find a Cornish pasty on the French coast.

The French have crème fraîche, crème liquide and even crème liquide épaisse, but it appears these aren’t quite to the taste of the British. Maybe try the thick Crème d’Isigny as an alternative to clotted cream on your home-baked scones?

This is changing gradually as craft beers are becoming increasingly popular in France and you are finally able to order something other than une blonde. Still, our British-brewed ales, lagers and stouts aren’t easy to find! British cider is also different from Breton cider.

Although you can find fresh milk in some French supermarkets, you’re more likely to find long-life milk – which takes some adapting to.

Although this may be a good thing since it becomes a special treat to enjoy when you pop back to the UK. And we’ve actually seen some French restaurants offer fish and chips on their menus. Also, mushy peas are not a thing in France!

Either love it or hate, Marmite is elusive in France. When you can find a pot, it is quite small and rather expensive so add that to the list of things you may want to bring back from a trip to the UK.

The French coast is truly beautiful, from the long sandy beaches in the north and on the Atlantic coast, to the little coves on the Mediterranean. But few have piers and jetties jutting out into the sea and offering entertainment galore for the whole family like traditional piers do in the UK.

The café and wine culture has influenced how people enjoy bars in France. France is the country of terraces, bistros and brasseries which offer a slightly more formal dining experience than traditional British pubs with their cosy interiors, roaring fires and plush armchairs. This is changing however, and more and more trendy bars in France are introducing pub-like atmospheres.

Many of our followers on Living France have said this and we gather it is because quality emulsion paint is very expensive in France.

Let us know what British things you miss most when in France: