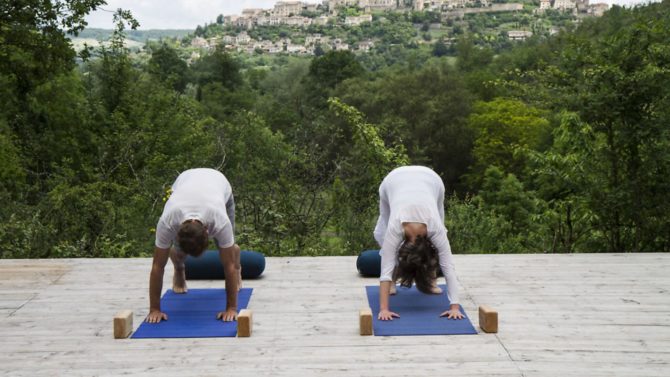 For those looking to escape it all, St Jean Retreats offers an idyllic location in a secluded valley overlooking the picturesque hilltop village of Cordes-sur-Ciel in south-west France.

It has been the home of the Bedford family for over 25 years, but they have recently opened it up to guests for dedicated yoga, art and wellness retreats. Last year they started to offer tailor-made group retreats and hope to attract like-minded people who want to spend time relaxing in the heart of Occitanie.

St Jean is a stunning, large stone house set within landscaped gardens and meadows, surrounded by more than 150 acres of private hillside woodland.

For hundreds of years the buildings, at the foot of the 13th-century fortified town of Cordes-sur-Ciel, had been left unloved until it was discovered by Paul Bedford and his wife Tracey who could see its potential, despite the crumbling walls.

They have spent 25 years bringing St Jean back to life and it is now a luxuriously peaceful and tranquil haven for the family and their guests.

The family first moved to St Jean in 1993 from the south-east of England, near Canterbury, in search of more of an outdoor lifestyle.

Toulouse ended up being a great transport link for Paul who was still working back in London at the time. With frequent flights he could travel back and forth easily, while the children settled straight into the local French school.

Their 29-year-old son, Chris, was three when they first moved to France and he has returned to oversee the new programme of retreats.

All the siblings who grew up in France now live in London – Chris’s elder sister Ali runs The Gantry restaurant in Brockley; his elder brother James is in property development and his younger brother, Matthew, who was born in France, is studying for a master’s at the LSE.

“It’s only recently that we’ve entered into the business side of things with the property,” explains Chris, who is the general manager of St Jean Retreats. “That’s more because of how the family’s grown and everyone’s moved away. We wanted to find another use for the place, rather than just sell it on or leave it here not really getting used.

“It’s been a fantastic place for us as a family and we wanted to share that a bit wider, but knew that to do it properly we had to do it ourselves.” Chris used to work in the marine insurance industry back in the UK, but returned to St Jean to set the project in motion.

“I was missing the sun and wanted to come back a little further south, so it tied in well with the timing of wanting to do this,” he explains. “I took the opportunity and left the office world to come and run it.”

Chris lives on site and his parents, who are retired, return during the summertime, moving to Marrakech in the winter. His dad also used to work in insurance before moving into real estate in France. The couple originally bought a property in the Loire before setting their sights on Tarn in the south-west.

“They fell in love with the place, started looking and made the move from the Loire to here,” Chris says. “They weren’t living full time in the Loire whereas when they came here, with us going to school, they made the commitment to come full time.

“It was certainly a daunting task for my parents coming down here, not speaking the language and my dad travelling back and forth and the sheer size of the project.

The St Jean property is quirky and vernacular, comprising beautiful stone buildings, many of which were originally barns and stables. As it is located on a hillside, the gardens and courtyards are on a number of different levels.

“When we first arrived it was a complete ruin, it was overgrown and the roof was collapsed,” Chris recalls. “The barn side was still being used, but as a farm shelter. It was four corner posts and a tin roof that was being used to store the hay.

“We took over at that point and it’s been a long 25-year project! As time goes on needs change, things evolve and you do hit a few bumps along the way, but it’s been a fun project and learning experience and we, as a family, relish it really.”

A family friend, who had helped them with their house in the Loire, became the project manager and hired a local team to undertake the work.

“The place was crumbling and falling apart,” Chris says. “It had a lot of historic value, so the French authorities were happy to see it being preserved, but we made very few changes to the actual structure itself – it is as it was. We have just renovated it rather than build anything new. The footprint was already here.”

The accommodation now includes nine guest bedrooms, consisting of a guest wing to the main house and converted, adjoining stables. The house has four spacious guest rooms leading to a living room with stone walls, beamed ceilings and a stone-built fireplace.

The Old Stables are on two floors, with two lower ground-floor bedrooms and two to three first-floor bedrooms which share a large comfortable sitting room.

Other facilities include a bar and media room, an outdoor swimming pool surrounded by mature plants and a tennis court, as well as a 10th-century chapel. There is also a yoga studio with a wood burner for winter classes and an outdoor wellness platform for yoga and painting.

“The design of the main house was very much down to my parents,” Chris says. “They did it themselves with the help of Architectural Digest and have got a fairly keen eye.

“We had furniture from England shipped over, we used to live in a fairly large old oast house over there, and then there’s bits and bobs they’ve bought here and certainly pieces that have been hand-built since we’ve been here.

“The work is fantastic – there are some lovely wooden pieces. It’s a real mix. Even the old pieces have been reupholstered by local people. We don’t like getting rid of things unnecessarily so we just update it and give it a new life whenever possible.”

The decoration includes art from France, England and America, as the family used to have a house in Colorado too, as well as garden furniture, tabletops and pots from Morocco.

“It’s inspirations from our lifetime and our travels,” Chris says. “It’s nice for us as a family, it works well.”

Set in such a stunning location, Chris hopes teachers and instructors will be inspired to host a diverse range of retreats at St Jean including yoga, meditation, running, music, art or photography. It is also available for small corporate away days for groups of up to 14 people.

“We settled on sharing it with groups of like-minded people which had a focus to their holiday,” says Chris. “We want it to be about the learning experience, relaxing and rejuvenation.

“My parents are only here half the year and I’m here to run it – it’s a passing of the baton. We wanted to keep it in the family and I’m very pleased to be back down in the south of France.

“We are dipping our toes in slowly, but hopefully over the next two to three years it would be nice to have maybe 10 to 12 retreats a year. We are speaking to a number of equestrian group organisers and other private group instructors who we hope to be working with.”

Dining forms a significant part of the retreats with three delicious meals provided each day. The main balcony is large enough to seat all guests at once and beside the lower courtyard there is an outdoor covered dining area which has a built-in barbecue fireplace and tailored drapes to add ambience as the sun goes down.

“There are spots all around and that’s one of the beauties of St Jean,” says Chris. “There are lots of areas where you can go and eat that make it quite special and different every evening which the groups have appreciated so far.

“We made the addition of the wellness platform not too long ago which has a stunning view of Cordes. It’s perfect for yoga or painting al fresco, or even just for an apéritif, it’s a lovely view and you can watch the sunset over Cordes.

“It’s something we’ve been meaning to do for a few years but now, with the retreat, we had the perfect opportunity to do it.”

Chris and his team try to support local artisans and suppliers wherever possible using seasonal produce from Tarn’s markets, farmers and vignerons. They also benefit from a clear spring water supply within the grounds, known as Foun de Loup (wolf spring).

When guests are not enjoying a class or sharing a meal, there are woodland walks, trail runs and landscaped gardens to explore.

“My parents wanted to keep the spirit they have built over the past 25 years,” Chris explains. “Lots of friends and family come down to visit and people leave feeling much better. It’s a wonderful place to be and it’s something we were keen to share with others.

“It’s going to be a great experience for everyone.”