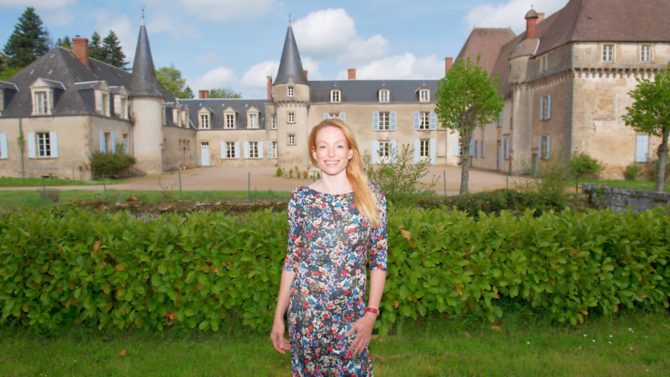 Château owner Stephanie Jarvis has appeared in two series of Escape to the Chateau:DIY and reveals why her fairy tale 16th-century château in Centre-Val de Loire is so close to her heart

When Stephanie Jarvis joked with her best friend, Nic Larkin, one evening over dinner that they could buy a château for the price of a four-bedroom terraced house in Arsenal, London, she had no idea that an otherwise ordinary evening would be the start of an adventure that would ultimately lead to her living out her childhood dream in rural France.

“He really surprised me by saying, ‘right, I’m going to ask work tomorrow and if they say I can work from home, we’re doing it’,” she reminisces.

The very next day, Nic broke the news to Stephanie that his employer had agreed to remote working and she started looking for their new home immediately.

“My boyfriend at the time was very cool because he said ‘yeah, go and buy a château with another man’,” Stephanie recalls. “We’re not together anymore, but he is still very involved and he’s buying in to the château.”

As Nic was too busy at work, Stephanie’s château-hunting adventures took place with her parents. After settling on France as their country of choice, there were no limits to their search and they travelled the length and breadth of l’Hexagone to find the right château.

Eventually, after many months of searching, they came across Château de Lalande, located in the beautiful Berrichonne countryside in the Indre department of Centre-Val de Loire.

“We arrived here and I knew it was the right one the moment I saw it. As soon as we pulled up in the car I said ‘this is it’, to which my father replied ‘we haven’t been inside yet’! I said, ‘well it doesn’t matter, because you can change the interior but you can’t change the exterior’.”

That was over 12 years ago. Unfortunately, after two years, Nic had to go back to England and he now splits his time between London, Brussels (where his fiancée lives) and the château.

Although the château is surrounded by beautiful rolling countryside, Stephanie reveals that it was the building itself that initially attracted her. As a child, she lived in the attics of mansions that her parents bought to convert into nursing homes.

“It was a really happy childhood, so I guess I just wanted to recreate this big, beautiful house, filled with lots of people.”

Built in the late 15th or early 16th century, the Château de Lalande has had a number of different owners over the years, one of the most well-known being Louis XIV’s cousin, La Grande Mademoiselle, who acquired the château in 1691 due to the then-owner’s inheritance debts.

When Stephanie and Nic moved in, they made the decision to do absolutely no renovation work for the first year.

“We just wanted to live in the house and see how we lived in it and what the light was like,” she explains.

Two years of major building work followed. They ripped down walls, replaced all of the floors, installed underfloor heating, new electrics and plumbing and added 10 new bathrooms to the three that were already there.

The light-filled château, which Stephanie runs as a chambres d’hôtes, looks very different now, compared to when they first purchased it.

“We came in and it was really pokey and dark inside,” she recalls. “It turns out that they put up lots of inside walls in the 19th century, probably for the heat. For example, the dining room, which is not a big room anyway, had been made into three rooms. We just put it back to the way it was originally.”

Stephanie is particularly proud of the changes that have been made to the dining room.

“It’s a very small, uninteresting room. It didn’t have any architectural features, it was just a cube. But I think it’s been made into a little jewel box.”

Stephanie was keen to decorate the château in a way that would bring it back to life again.

“Some of the upstairs bedrooms had very beautiful original wallpaper and little scraps of fabric left that matched it, which I managed to make into the swags and tails of new curtains.”

The eclectic mix of furniture, which now fills the château’s reception rooms, was sourced both locally and from London auction houses.

“The joy of bringing in nice furniture and sourcing it from everywhere has been really fun. Every year I do a van trip to bring more items down.”

Sadly, Stephanie’s father died only a few years after she bought the château. His paintings, which take pride of place on the walls, add a modern twist that contrasts wonderfully with the building’s more traditional features.

“As the château has been built onto every year and is architecturally a bit of a mix, I didn’t feel any need to stick to one style inside,” she explains. “I felt I could create more of an English country house look where it’s all mixed. I also didn’t want it to feel as if I had just decorated it. I wanted it to look like a house that had always been lived in and had just been added to a little bit by each generation.”

The bedrooms, too, have been sympathetically restored and have each kept their original, charming names. Like the reception rooms on the ground floor, the bedrooms all radiate their own, individual character.

“The nicest room is called Chambre Bonne Maman, which is the polite form of grandma in French. That’s where the Marquise used to live, the children’s grandmother,” says Stephanie.

Chambre de Roger is, despite its masculine-sounding name, a beautiful feminine room with a small four-poster bed.

“It is called ‘Roger’ because that was the name of the Marquise’s valet and that was his bedroom. But I think it’s more important to keep the history. In fact, our Chambre Rose is now yellow! I hung pink curtains in there though, just to keep the link.”

At first, Stephanie and Nic had planned to buy the château, renovate it and then move on to another project. However after living there, they fell in love with it and made the decision to stay put. This meant that they had to find a way for the château to pay for itself, so they decided to open it up as a chambres d’hôtes so that other people could come and stay and enjoy the château and its wonderful setting.

As part of this, Stephanie also runs events, including a singles weekend, a bread and cheese weekend workshop and, most recently, she has teamed up with a local wine-tour business to offer a wine and cheese adventure break that includes tours of the local vineyards and a seven-course food and wine matching dinner (which she has also started offering to her other guests).

“I think you choose the things that work with your personality,” she muses. “We’ve done things that we would enjoy doing and have opened them up to others. Offering bed and breakfast was an obvious route to go down but the events side has been a bit different.”

“I know a lot of musicians because I used to sing, so that’s how the musical workshops started. I want to focus on anything artistic, so music is great.”

Escape to the Chateau:DIY visits couple who swapped their townhouse for a French château

Just do it! Why we took on a grand French château in our 30s

In peak season, Stephanie’s mum and her ex-boyfriend, Michael, help her out with the workload. Currently only open from Easter time until early November, Stephanie is considering opening up the chambres d’hôtes for Christmas events.

Outside, the château is surrounded by 60 acres of serene countryside and Stephanie admits that this is something they are struggling with, as they don’t have a full-time gardener. The organic fruit and vegetables that the château’s walled garden produces are used to create delicious feasts for their chambres d’hôtes guests.

“Although I’m in the middle of the countryside, it’s actually a far less isolated life than living in a city,” says Stephanie. “When people come and stay, they’re living with you and you see them every day. You get to meet people and get to know them really well.”

She admits that although she loves her life in the middle of the French countryside, she does try to go back to London at least once a month.

“I’d probably go crazy if I didn’t,” she confesses.

When asked what she loves most about living in a château, it’s the fact that she will be working on it for many years to come that seems to inspire her.

“I love living in a house that I’ll never get to the end of.”

Escape to the Chateau:DIY is on Channel 4 weekdays at 4pm. To catch up with the series so far, go to www.channel4.com