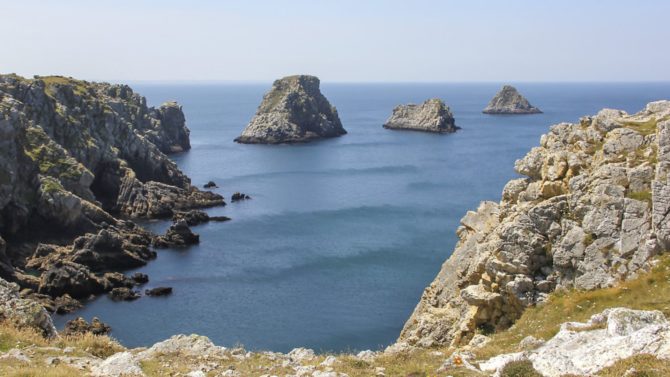 Visit three coastlines in two days with a trip to the northern, western and southern reaches of Finistère, Brittany’s answer to Land’s End

Why not begin at the end? Where the road peters out at the end of the Kernéléhen peninsula on a northern tip of Finistère (literally ‘end of the earth’) is a final resting place dating back nearly 7,000 years.

It is the Cairn de Barnénez, Europe’s largest megalithic burial chamber and one of the oldest surviving structures on Earth. Heaped on a clifftop, this unassuming site predates Stonehenge by 2,500 years, yet you can visit for just a few euros.

From Barnénez, a pleasant drive south brings you to Plouezoc’h. Pick up the southbound D76 to cross the river at Le Dourduff-en-Mer and follow the Morlaix estuary into the town of the same name.

Mind your step in Morlaix because you cannot help but look up and gawp at the colourful timber-framed houses – unless you are walking along the town viaduct. For a couple of euros you can visit one of the emblematic ‘lantern houses’, which have ornate staircases with bridge-like landings offering dizzying views over their lofty interior courtyards. If the Duchesse Anne’s house is still closed for restoration, another fine example is the Maison à Pondalez – ‘pondalez’ referring to these staircase bridges, or ponts d’aller.

Once out of Morlaix, it is a 30-minute zip along the westbound N12 autoroute to Landerneau. This riverside town would perhaps not warrant a stop but for its fabulous Leclerc outlet – not the supermarket but an art gallery founded by the family behind the chain. Le Fonds Hélène et Édouard Leclerc pour la Culture is an extraordinary exhibition space where, for €8, you can admire great works of art, far from the madding crowds. Last year, it was Picasso. This year, the sculptures of Henry Moore are on display until 4 November.

After a bite to eat (try Les Petits Plaisirs salon de thé across the road), head out of town and pick up the D770 and then the N165 heading south into the Armorique regional park. At Le Faou turn west and follow the D791 over the cable bridge on to the Crozon peninsula. As the road climbs beyond the trees, look left to see the domed summit of Ménez-Hom, thought to be a Celtic site of sun worship.

The route now shoots along the peninsula spine, via the town of Crozon, and out to its claws. The northern claw is the town of Camaret-sur-Mer, outside of which (in Rue Saint-Pol Roux) standing stones cluster in a marshy field. But park up instead on the southern claw and walk out to the edge of the Pointe de Pen-Hir, a wild, windy and wonderful promontory where the surf lashes the cliffs and the sparkling Atlantic is dotted with rocky outcrops.

Afterwards, retreat to the sheltered beach at Morgat where the Hôtel de la Baie is a nice place to watch the sun go down (doubles with sea view from €70, hoteldelabaie-crozon-morgat.com). Pop over the road to Della Spiaggia for a simple supper of moules, or steak grilled on a hot slate at the table (mains from €8.90, dellaspiaggia.fr).

As you bid au revoir to Brittany’s west coast, branch off the D887 after Telgruc Saint-Mer and follow the golden sands through Saint-Nic. Then join the D63 that climbs steadily up the hillside to Locronan, one of the Plus Beaux Villages de France. This handsome community of granite houses softened by wisteria and Breton blue timbers once prospered on the sailcloth industry and now prospers on tourists who potter around its cobbles, buying gifts and galettes. If you can cope with some huffing and puffing, there is a pleasant 45-minute walking circuit through the back lanes and up on to the hillside for wonderful views over the western coastline.

Back on the D63, it is a 20-minute descent through woodland into Plogonnec and on to the D39 into Quimper, administrative capital of Finistère and the cultural heart of Brittany. Dominated by a magnificent Gothic cathedral, the town is located at the junction (kemper in Breton) of the rivers Stier and Odet, hence its name.

Now is your chance to hit the shops! You might even find a hot chocolate bowl with your name on it, for Quimper is the home of the iconic painted pottery (or faïence) that you see for sale all over Brittany. Pop into the Faïencerie Henriot-Quimper (admission €7, henriot-quimper.com) across the river in Locmaria to see more.

Alternatively, visit the Musée des Beaux Arts or stroll around the Jardin de la Retraite off Rue Élie Freron before lunch in one of the cathedral square cafés.

From Quimper, take the N165 and D24 to Pont-Aven. Touristy for good reason, the village is famous for its mills, marina, buttery biscuits and school of painting. Post-Impressionist painter Paul Gauguin put the place on the map in the 1880s with his vibrant canvases of dancing Breton girls and the watermills on the frothy river that gushes through the village. Artists still abound today including Alain Pondeville, whose colourful paintings have even graced the tins of the local Traou Mad biscuit company.

Gauguin, of course, eventually ended up in Tahiti, and so can you. Twenty minutes beyond Pont-Aven, off the D77, is a glorious sandy beach known locally as Tahiti. Sheltered and non-commercial, it is just before the village of Raguénez. Miss the discreet yellow sign making the left turn and you will probably end up at Ar Men Du, a hotel and Michelin-star restaurant overlooking a beautiful tidal island (menus from €49, doubles from €99, www.men-du.com).

Funnily enough, there is also a stunning beach known as Tahiti on Brittany’s north coast, just where the road peters out at the end of the Carentac peninsula, across the water from the Cairn de Barnénez. But that takes us back to the start of the road trip. Or was it the end?

GETTING THERE: Brittany Ferries operates crossings to the nearest ports, Roscoff and Saint-Malo (brittany-ferries.com); Barnénez is 40min from Roscoff, about 2hr from Saint-Malo and 6hr 30min from Calais; Rennes airport is 2hr 15min away; The train from Paris Gare Montparnasse to Morlaix takes 3hr.