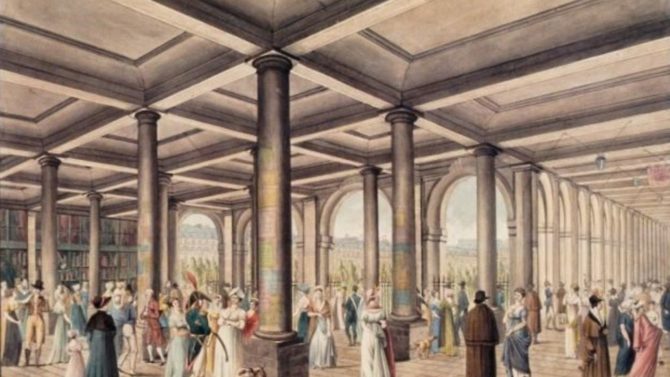 Want to discover some of the secrets of Paris? A unique guided tour teaches visitors about the history of brothels in the now illustrious district of the Palais Royal in Paris

Did you know that the Jardin du Palais Royal in Paris used to be a bustling place for prostitution? Or that Albert Edward, Prince of Wales (later King Edward VII) regularly visited one the most notorious and luxurious brothels in Paris?

In fact, unbeknown to most visitors, many locations in the Palais Royal district have a rather racy past. This and more I found out on a fascinating little guided tour around the first arrondissement which took us through the history of brothels in Paris (a quick note of caution: while the visit was full of funny anecdotes and amusing facts, it’s best suited to adult visitors).

From golden belts to maisons closes

As the ‘oldest occupation in the world’, prostitution was of course present in Paris. In the Middle Ages, prostitutes were generally accepted in society and were housed in convent-like dwellings.

On one occasion, the wife of King Philip II embraced a nicely dressed young woman in church during the sign of peace but later realised she was a prostitute. She was profoundly shocked and as a result, the king banned prostitutes from wearing coats and ordered they wear golden belts so that they were recognisable. He also asked for brothels to be located less than 300m from a church so that clients could repent after their visit…

Under the reign of Louis IX (also known as Saint-Louis) in the 13th century, brothels were removed from the centre of town and forced outside the main walls. This is where the French word ‘bordel’ comes from since the brothels were located on the edge of town (‘au bord de’). They also had to have a red light outside the door as a sign they were a place of debauchery.

Much later in the 17th and 18th centuries, maisons closes became more and more frequented and luxurious. They were held by formidable women such as Marguerite Gourdan or Mademoiselle Brion (known as Comtesse de Launay) who published a kind of journal relating her story.

In the 18th century, brothels were still thriving but regulations were enforced, particularly in terms of hygiene and safety. Girls had to have regular medical check-ups and brothel owners had to provide clean linen and bathing products.

A French icon: the life of Serge Gainsbourg

Throughout this historical overview, our bubbly and good-humoured guide Julie took us from the little streets of the first arrondissement past former maisons closes to the courtyards and gardens of the Palais Royal itself which, for a time, were the heart of the city’s prostitution activities.

Today’s quiet and peaceful garden off Rue Montpensier is nothing like the hive of activity there once was. Shops, cafes and brothels were lined up under the arcades which you can still see today and a wooden palisade separated the courtyard from the rest of the palace, cutting it off like a small, independent town within the city of Paris – there was even a circus there! Prostitutes set up shop here following a certain hierarchy and clients could browse pictures of girls to choose.

As we left the garden, we passed an unassuming façade which happened to be one of the first shops selling condoms, or redingote à l’anglaise (the English coat) as they were then known since they were imported from England. Fun fact, although they were banned at his time, Louis XIV used them often to avoid illegitimate children.

A leap through time and the winding streets outside the Palais Royal brought us to a building on Rue du Chabanais. It’s hard to imagine that the rather bland facade of today used to harbour the most famous and extravagant brothel in Paris. Opened in 1878, Le Chabanais was soon known as the ‘House of all Nations’ and welcomed very famous guests from English royalty to major artists. It hosted inauguration parties for the 1889 Universal Exhibition and some of its rooms, ostentatiously decorated with luxurious items and fabrics even won prizes.

Le Chabanais was such an institution that it was frequented by celebrities such as the Prince of Wales who used to bathe in a custom-made copper bath which he filled with MUM champagne and even had a special chair built for him, named ‘la chaise des voluptés’.

Other famous figures include Humphrey Bogart, Cary Grant and foreign diplomats on official visits who always had a slot in the schedule called ‘Visite du Sénat’ which actually meant a trip down to Le Chabanais.

A couple of streets away is another famous brothel on 6 Rue des Moulins, also now just a normal residential building. Known simply as ‘Le 6’, it was a favourite haunt of painter Henri de Toulouse-Lautrec who grew close to many girls and enjoyed painting them in a very natural, non-judgmental way.

In 1946, maisons closes were officially closed and made illegal in France following a law named after Marthe Richard who aggressively campaigned against them after she stopped practicing as a prostitute herself.

Julie Rault’s fascinating tour is made all the more interesting by her fun personality and light tone, bringing to life a captivating and unknown side of Paris. ‘Le Paris Coquin’ is just one of her many walking tours of the French capital, available in English, French and Italian. Visit parismile.fr to find out more.

Previous Article Expats feel more welcome than ever in France
Next Article Women of influence are applauded during the European Heritage Days in France.