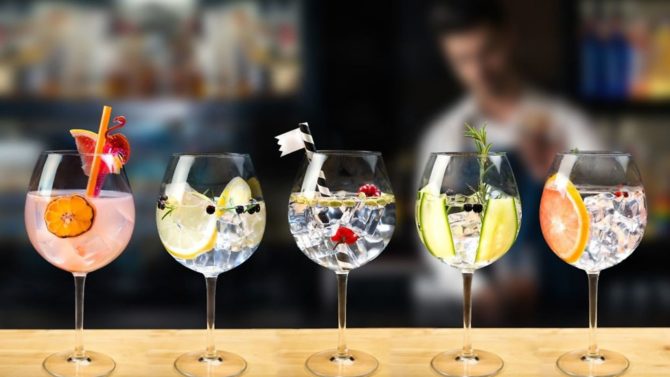 The British craft gin scene has grown swiftly over the last 10 years – has the spiritual home of wine and cognac kept up?

Over the past decade, Britain has seen a huge growth in interest in craft gins. There are currently around seven times the number of distilleries specialising in the drink than there were just 10 years ago, and the trend shows no sign of slowing. Yet, in France, it is still common to walk into a supermarket and see just two or three brands on sale with names unrecognisable to the UK palate, such as Old Thames London Dry Gin on sale in Carrefour.

One brand which has always stood out on the shelf for me is the charmingly monikered Old Lady’s Gin, produced in Bordeaux by the famous Marie Brizard, known primarily for their liqueurs. Both these gins occupy the same drinks cabinet space as Gordon’s or Beefeater do in the UK and bear little resemblance to the arty bottle and label combos to which we have become accustomed in recent years. They are workaday gins, if there is such a thing.

Gin first became popular in Britain in the late 1600s, when William of Orange rose to power as King of England, Ireland and Scotland in 1689. William, a Dutchman by birth, was on a mission to destabilise the overwhelming power of Louis XIV of France. The Sun King’s invasion of the Netherlands had arguably started William on his path to marrying James II’s daughter Mary in the hope of an alliance with Britain against Louis. William quickly set about instigating taxes against French imports in an attempt to weaken the country’s economy, some of the most potent of which were against wine and cognac.

At the same time, the wily ruler also introduced an act to encourage distilling from corn in Britain. Imported Dutch genever had already begun to make its mark in England but the harsh flavour wasn’t to everyone’s palate.

The similarly flavoured but anglicised drink gin soon began to flourish, using flavourless corn spirit as a starting point rather than genever’s malt wine base. Very soon, gin filled the gap left by dwindling supplies of French brandy, becoming the tipple of choice for the working classes throughout England.

So, in light of the fundamentally anti-French origins of gin, it wouldn’t really seem to surprising if France hadn’t been quick to jump on board with the craft gin revolution. And yet, on board it most certainly is. Many of the new gin producers have emerged around Cognac, where spirit production was already entrenched, but new French gins are springing up all over the Hexagone, with origins including Clermont-Ferrand, Paris, Dijon, Provence and Normandy.

Most interesting is that France, far from being a gin backwater, was actually ahead of the first wave in the wildly swift resurgence of British craft distilling. The story of Citadelle gin reputedly began in Dunkirk in 1771, with a royal charter from Louis XVI, but it’s in cognac country that the name truly made its mark.

During the summer of 1996 at the Château de Bonbonnet in Ars, just 10km from the centre of Cognac, a plan was hatched to ‘distil summer’ and create a new French gin. Maison Ferrand, the château’s owners, has its roots firmly in the spirit cognac, stretching all the way back to the 18th century.

Using the original Citadelle’s recipe and techniques as a jumping off point, Maison Ferrand proceeded to use its distilling know-how to create one of the first ‘new’ craft gins of the 20th century. Citadelle has won more than 60 medals, among them ‘Spirit of the Year’ at the 2017 World Spirit Awards. The bottle is elegant, too, with echoes of a courtly past. It remains one of France’s most successful gins.

Another gin to develop in the heartland of traditional spirits, yet much more recently than the long-established Citadelle, is Gin NAUD. The Famille Naud distillery dates back to 1923; in 1999, it was the first to produce vodka in the Charente area, and in 2017 its gin was born. Juniper is paired with grapefruit, garden spices, bergamot and spices for a powerful (it’s 44%) and aromatic flavour.

Also building on an established tradition of spirit distillation is family business Christian Drouin. Based in Normandy, the business has been brewing the world-famous local spirit of calvados since the 1960s. Much more recently in 2015, the company launched relatively small batches of Le Gin using 30 different apples varieties and eight botanicals.

Much the same as in Britain, the French craft gin scene encompasses a huge variety of flavours and styles. There are the glitzy bottles of Gin Gold 999.9 from Alsace to the more unusual flavour and colour of Saffron Gin by Gabriel Boudier in Dijon. Manguin Oli’Gin uses Provence olives, Jindea uses Darjeeling black tea, while Rétha Oceanic Gin numbers seawweed in its botanicals. The only limit for ingredients and formulations is the imagination of the distiller.

It is fair to say that while France may be starting to catch up with Britain in terms of gin brands, it still has a long way to go. While the French market is worth around €279m, expected to grow annually by 10%, the UK gin business is worth a staggering €3bn. It seems that in France, ‘mother’s ruin’ has yet to escape its Old Lady’s connections entirely.

3 French drinks you should be making cocktails with