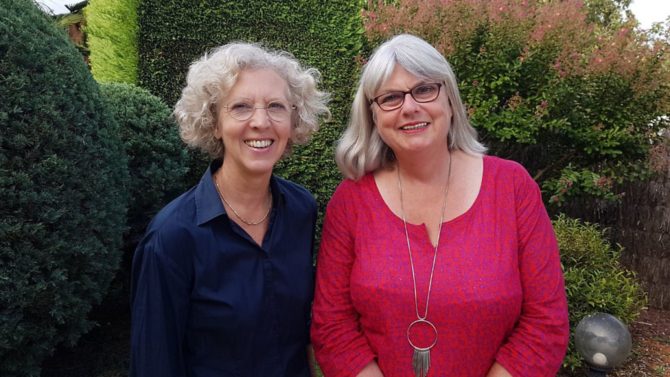 When school friends Gillian and Linda from Edinburgh lost touch at the age of nine, little did they know they were destined to find each other again at their local choir in Deux-Sèvres

When Francophile Linda, 60, made her move to France in 2008 to settle permanently in the holiday home she’d owned with husband Mike since 2003, she was fulfilling a lifelong dream. As someone who had studied French at university, she’d planned to retire to the country and redundancy presented the ideal opportunity. Husband Mike joined his wife after retiring two years later. A music lover, Linda joined a local French choir in Coulon in Deux-Sèvres, Nouvelle-Aquitaine, in 2014, hoping to meet fellow singers and form some new friendships.

Gillian had lived in Paris for 35 years when she retired from her job as a conference translator in 2016 and moved to Magné – also in Deux-Sèvres, joining the Coulon choir shortly afterwards. With choir meetings focused and often busy, it was six months before the two women had their first meaningful conversation. Both were in for a surprise!

“We were sitting down waiting to start a concert when Gillian tapped me on the shoulder and suggested we go for a walk to pass the time,” said Linda. “It was the first time we’d really been able to talk. I recognised her Edinburgh accent and asked her which area she was from. When she said Craigleith – the small area where I’d grown up – I was stunned and asked her if she’d gone to the local primary school. It took a couple of minutes, but I remembered having a friend called Gillian at school, who had gone off to study French. She had the same curly blonde hair and something clicked. My heart in my mouth, I asked her, ‘you’re not Gillian Baxendale by any chance?'”

It turned out that the pair had been best friends at primary school, where they had sung in the school choir run by Gillian’s mum – the school music teacher. But they had left at different times and had not seen each other since the age of nine.

“I was completely gobsmacked when I realised who Linda was,” says Gillian. “I was over the moon as I’d completely lost touch with everyone from Edinburgh; the fact that we had been best friends was the icing on the cake!”

The pair have various memories from their school days, including one particular incident when Gillian’s music teacher mum decided Linda’s voice wasn’t good enough for choir and encouraged her to play the glockenspiel instead.

“Linda’s mum – who’s in her 90s – still remembers my mother. She was so angry about it at the time!” laughs Gillian.

The pair are now firm friends once again. And their partners have found a connection too – Mike now plays in a band with Gillian’s husband Jacques, 64.

“We only live 20 minutes apart so we’re always meeting up. It’s an amazing coincidence that we should have met again in this way, but wonderful too,” says Linda.

Comme le monde est petit, as the French would say. It really is a small world.

How to make great new friends in France

Previous Article Where to buy property in Lot-et-Garonne in south-west France
Next Article 2020 elections in France: what do you need to know?