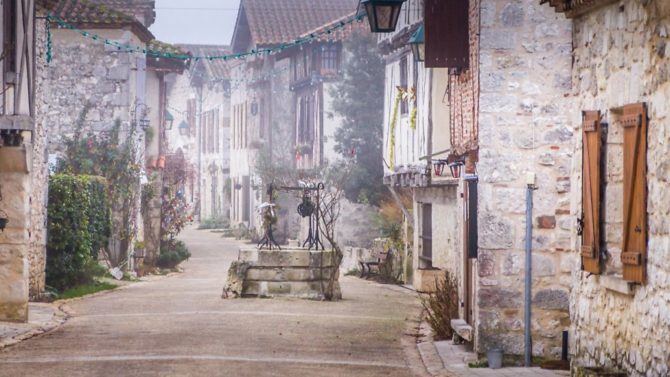 Dordogne’s neighbour Lot-et-Garonne is a fantastic place to buy a French home, says Julie Savill as she reveals her top six places

Like many French départements, Lot-et-Garonne in the region of Nouvelle-Aquitaine, is named for the rivers that flow through it. It’s a greedy department. Most are content with one waterway (Dordogne, Tarn, Charente) but no, we have two. The Lot cuts through the north from the Cahors direction, the Garonne pushes up from Toulouse and the two meet and merge around Aiguillon before surging on to join the Dordogne and head out to sea past Bordeaux.

We upgraded from the one-river Dordogne to the double-flow Lot-et-Garonne three years ago. We had loved Dordogne but we have itchy feet and after 13 years it was time for something new. We did what good property hunters do and spent a few weekends exploring different areas and landed on Lot-et-Garonne and knew it was ‘the one’.

The area that is newest to us and that deserves attention is Villeneuve-sur-Lot and the south of the department. It’s an area less well-trodden on the tourist circuit and for very good reason, apparently.

We asked a French friend why this area seemed so much less touristy than Dordogne and the answer seems to lie in historical wealth. Dordogne had little in the way of industry or very valuable farming, so it was a logical choice to build on the good looks and remarkable natural features of the area and go all out for tourism. It was, as we all know, a huge success.

Lot-et-Garonne, however, had a thriving local economy with its plum orchards for the famous Agen prunes, hazelnuts, Armagnac and Marmande tomatoes. Told you this was a greedy place. And then there are the major towns of Agen and Villeneuve-sur-Lot where there are thriving industries, pharmaceutical companies, aeronautics, retail and, wait for it, jam production. Miam, miam…(yum, yum).

So, where should be on your list of stops if you are considering this beautiful area (and it truly is beautiful) for a short break, a location for a second home or a permanent move? Different things float different people’s boats, but for me there are some things that need to be seen on a discovery trip.

Around halfway between Bordeaux and Toulouse, this is the departmental capital of Lot-et-Garonne and a bustling, but manageable-sized, city. Agen offers wide shopping boulevards, some fabulous Napoleonic and medieval architecture and the second longest aqueduct in France. The Cathedral Saint-Caprais is worth a visit for the most elaborate and colourful interior. It has been recognised as a UNESCO World Heritage Site.

This little gem of a town is the epitome of small but beautifully formed. At 30km south-west of Agen, it sits on the banks of the pretty Baïse river and is divided in two. Historical Nérac on one bank and modern Nérac on the other. There is history at every turn here from the Henry IV palace with its fabulous arcades to the gothic Pont Vieux and the old tannery buildings. And if you needed more persuading to drop by, Nérac is also home to Chocolaterie Artisanale La Cigale, the shop said to have inspired the film Chocolat.

For a permanent move I would consider living within easy reach of Villeneuve. Practical if not a real looker, the town has everything you need and some of it is open on a Sunday morning. Large garden centre, check. One of the best E.Leclerc supermarkets we have seen, check. The maddest brightly-painted château hotel/restaurant in France (just down the road at St-Sylvestre-sur-Lot), oh yeah! Château le Stelsia really has to be seen to be believed. It is owned by the same man who started the Gifi chain of homeware shops that is now 350 branches strong. Known for its bright and breezy style, the same can be said for the château but this comes with a Michelin-starred restaurant, a spa and a full calendar of events throughout the year, including vintage car shows, music events and more. And anyone is welcome to walk or picnic in the extensive gardens free of charge and enjoy the music piped throughout from the (Bose) speakers.

Most good things in Lot-et-Garonne seem to come in small packages and Pujols is no exception. Perched on a hill, south of Villeneuve it is the archetypal chocolate box village. Bring a camera and spare batteries – you’re sure to need them. There is a photo opportunity at every step and gorgeous views over the Lot river to one side and open countryside to the other.

The village is proud of its good looks and is exceptionally well-kept as a result. There are a couple of very good restaurants so you can make this an end of day stop. Don’t miss the 15th-century frescoes in the church.

If you are heading west from Villeneuve you’ll go through this little town. It more than makes up for its tiny size with a couple of really special features. First, the 13th-century Knights Templar Commanderie, which is classified as a historical monument, now housing a very affordable restaurant. Just up the road is the garden of Latour-Marliac. This is the nursery that bred the first and finest range of coloured water lilies that entranced Monet for his garden at Giverney. You can still see the order he placed when starting work on his lakes.

To the east of Agen is the tiny town of Puymirol, the oldest of the bastide towns of Lot-et-Garonne. Although this is officially a bastide, it is set along a main street rather than around a central square. Check out the medieval stone buildings with their arcades, the original gateways to the town and the church with its huge carved doorway with multiple arches.

And there’s more, much more – it’s always good to make your own discoveries. For myself, I can’t recommend my new home area enough. The beautiful rolling countryside dotted with hilltop towns and acre upon acre of fruit trees is a tasty treat by anyone’s measure.

(Freephone from the UK)