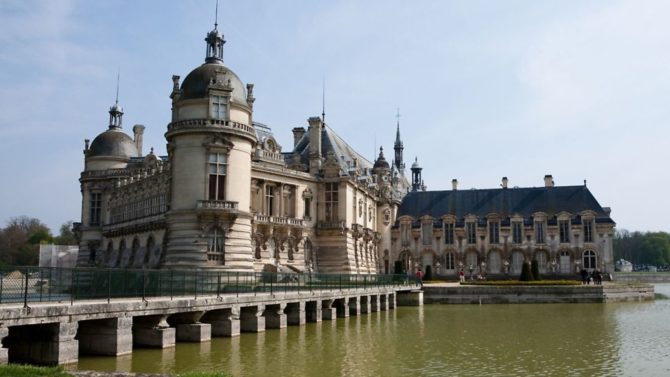 Château d’Anet, near Dreux, Eure-et-Loir – as seen in Thunderball

The château has an interesting back-story; built in 1547, it was constructed for King Henri II’s mistress Diane de Poitiers as a gift from the king. Although it escaped being pillaged during the Revolution, many of the interior furnishings were sold off as biens nationaux and part of it was demolished. Having fallen into disrepair, it was restored during the mid-19th century.

Motorcycle chases don’t come better than this! In 1983’s Never Say Never Again, Bond finds himself engaged in a thrilling motorcycle chase around the French Riviera with Fatima Blush, another sinister SPECTRE operative. Astride his Q-branch motorbike, Sean Connery expertly weaves around the narrow but beautiful streets of Villefranche-sur-Mer, as well as the colourful nearby town of Menton.

This château, located south-east of Paris, stars as the ostentatious Californian residence of the nefarious Hugo Drax in Moonraker. Roger Moore flies over the beautiful, André le Notre designed gardens in his helicopter before landing almost outside the château’s front door. Talk about making an entrance!

Château de Chantilly – as seen in A View to a Kill

Yes, yet another French château turned Bond villain lair! The famous Château de Chantilly stands in as the home of evil Max Zorin in A View to a Kill. Bond (Roger Moore) visits Zorin’s home with racehorse trainer and uncover MI6 operative Sir Godfrey Tibbett for a horse sale.

The sky-high setting of the Eiffel Tower’s restaurant is a fittingly dramatic setting for one of the most dramatic scenes in A View to a Kill. Bond meets French private detective, the amusingly-named Achille Aubergine, in the Tower for dinner, but the latter is assassinated by Max Zorin’s bodyguard.

12 film locations in France to visit