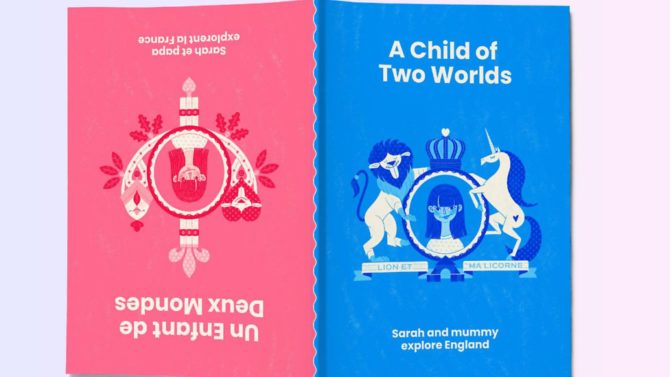 A Child of Two Worlds is a new book for dual-heritage children of English and French parents. The first book from publishing start-up Two Worlds has been created to support parents from different countries as they introduce their child to the different identities of two nationalities.

Aimed at children aged 0-7, A Child of Two Worlds is designed to look like a passport and takes the parents’ countries of origin as a starting point. The 64-page story is made up of two halves, meaning that reading can start from either parent’s side, with both stories ending on the centre spread and child and parents meeting in the middle.

To encourage children to engage in learning about their parents’ backgrounds, native languages, customs and traditions, and to see themselves and their families reflected in the story, the book can be personalised using customisable avatars that give a choice of skin, hair and eye colour, and finishing touches such as glasses, freckles and beards can be added too.

“For dual heritage children, exploring and understanding the component parts of their identities at a young age is crucial for the development of their sense of self. We’re living through increasingly divisive times, which is why we believe that instilling a sense of curiosity about cultural identity as early as possible is even more important if we want our children to grow into adults who celebrate cultural diversity, their own and that of those around them. A Child of Two Worlds is our way of supporting parents of dual heritage children on this journey,” says Andrei Andreescu, co-founder of Two Worlds. More countries are planned in the coming months.

Helping bilingual children to read and write in English

Previous Article UK-France treasure hunt with £650,000 prize to be launched in April
Next Article Interview: Celebrity chef Raymond Blanc on the magic of cooking