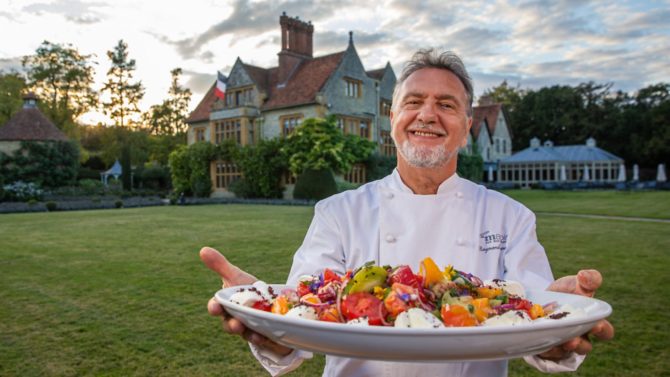 Filmed in the stunning gardens and cookery school of the famed Le Manoir aux Quat’Saisons in Oxfordshire, the only country house hotel in Britain to have retained two Michelin stars for 36 years, Simply Raymond Blanc shares the French chef’s lifelong love of cooking.

Raymond grew up near Besançon, in eastern France, where he helped his father grow vegetables and learned to cook from his mother who used the fresh, seasonal produce to make delicious family meals. He began working as a waiter and moved to England for a position at an Oxfordshire pub before going on to launch his own restaurant in Oxford. He bought Le Manoir aux Quat’Saisons in the 1980s which has become one of the most well-known gastronomic destinations in the country.

In his new Saturday series for ITV, Raymond will showcase delicious, home-cooked recipes such as cheese fondue, pan-fried salmon with spinach, steak with red wine jus and tarte Tatin. He will also be joined on the show by top chefs including Angela Hartnett, Paul Ainsworth and Nathan Outlaw.

Did you enjoy filming this 10-episode series?

Very much so. We recorded part of the series in the gardens at Le Manoir this past summer and I was so grateful to be outdoors. Yes we worked hard, but we also were able to do some fantastic cooking connected with the gardens and the produce around us. For me, it was very special, especially considering the many challenges of 2020.

What is the aim of the programme?

This programme is aimed completely at the home cook. It’s all about simple, delicious dishes that can be prepared quickly and with minimal fuss. Dishes where the ingredients speak for themselves. It’s the type of food that I love to eat when I return home after a long day and I crave simplicity. And as I always say, some very basic skills will take you so far in the kitchen. For example, once you know how to pan-fry vegetables or meat or fish, you know how to pan-fry millions of dishes!

Will it be easy for viewers to replicate the recipes at home?

Absolutely. That was always the goal. It’s simple cooking that everyone can try. I come from a very humble background and the food my mother prepared for our family was simple and made with love. The perfect combination. She let the ingredients shine. For example, she never used stock in soup, only water, and she let the vegetables speak for themselves. The food was so special. My mother has been my greatest inspiration and her approach helped form the very ethos of my cooking to this day.

Do you hope it will make people who aren’t comfortable in the kitchen more confident cooks?

Definitely! That would be the greatest accomplishment with this series, helping those who are a little nervous to feel more confident with trying new recipes at home. I have been privileged to be a teacher and mentor for the last 40 years and it is one of my greatest joys.

We have 12 gardens at Le Manoir, including the organic vegetable garden which helps supply our kitchens with beautiful, seasonal produce. In full season, we have 170 varieties of vegetables. We also have an orchard of 2,500 trees, an organic medicinal herb garden, a Japanese tree house garden, and more. I always say the garden is the canvas of my gastronomy – it all starts there.

Are there any foods that people would be surprised to know you like?

It’s funny to say but I only discovered brown sauce at age 65. Bear in mind I had been in England for over 40 years at that point! I had never really tried it nor had an interest. Then one day a friend offered me a bacon butty with brown sauce and I can tell you now, it was a revelation. I cannot believe I waited so long! After that, I wanted to know everything about it and I was so surprised to look at the label and find it doesn’t contain a single artificial ingredient. Fantastic.

How do you think the lockdowns, and the pandemic in general, has changed our approach to food?

It has been such a difficult and trying time for so many, so it is hard sometimes to look for the positives. But I suppose this pandemic has helped us grow closer family ties, to reconnect with each other and reach out to those we care about. It has also certainly reconnected us with our homegrown produce. Throughout this time it has been so crucially important to support our local producers and suppliers, whether it be farmers, fruiterers, butchers, local food shops, and so on. It simply makes no sense to be importing food from across the world, creating so much pollution in the process, when instead we can get it locally and support our talented producers and our economy at the same time. In this series we are connecting the viewers with the treasures they can grow and cook right here in Britain.

Do you have a very healthy approach when it comes to cooking?

For me, it’s about balance. Food should be enjoyed and also give you the nutrients we all need to thrive. A simple organic or free-range egg, for example, has so many nutrients in it. It’s a beautiful thing. If you ask me what you should have for breakfast, I always say a poached egg and then also tomatoes because they have lycopene in them and they are anticarcinogenic.

Can you sum up in a few words what cooking means to you?

I see cooking as magic, and an act of love. You take raw produce from the garden, the river, all around you, and then as a craftsperson, you transform this produce with heat. You put all of your love and knowledge into a beautiful dish to share with others around the table (or to happily enjoy on your own!). That is the magic of cooking.

Simply Raymond Blanc starts on Saturday, 30 January at 11.40am on ITV.