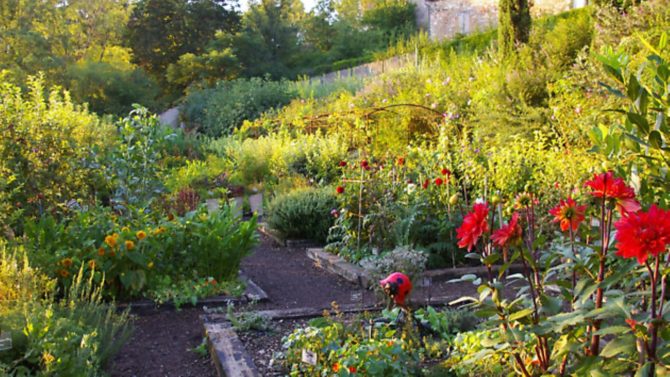 When I moved to France in February 2009 I didn’t realise just how much I was going to become involved with local life. Before leaving Hertfordshire I had studied horticulture at the renowned Capel Manor College and one of my fellow students, on hearing where I was moving to, had commented that my dream job would be to work at the Jardin des Paradis, a garden located in Cordes-sur-Ciel.

I knew no one in the area and wanted to improve my schoolgirl French so just four months after moving, I knocked on the door and offered to work for nothing once a week provided they only spoke French to me. That began a relationship which continues today, with the small difference that I am now vice-president of this pretty, not-for-profit garden which attracts 12,000 visitors each year.

The garden is built on the lower fortified terraces of Cordes-sur-Ciel, a beautiful bastide town in the Tarn department. It was created in 1998 by two talented landscape gardeners Eric Ossart and Arnaud Maurières, and the aim is to create a themed garden based on the gardens at Chaumont-sur-Loire.

The word ‘Paradis’ is actually an old Persian word meaning an enclosed area, and at the Jardin des Paradis this is achieved by the city walls on one side and a natural wall of ancient varieties of fruit trees along the other. Inside you’ll find other paradises of colour, scent and the sound of running water.

Originally a sloping field, the garden has been terraced to create lots of separate areas. Throughout, water plays a huge part, whether it is the long cascade created by a row of zinc buckets, the old lavoir which is now a carp pond, the lily ponds or the small water mint area in the middle of the potager which is constantly alive with the sound of frogs.

The traditional raised potager combines old and new vegetable varieties with colourful plants while the banks (or tallus as they are called here) are planted with shrubs, old English roses, bulbs and perennials.

However it’s the tapis which are the trademark of this garden. The tapis, or flower carpets, are huge walk-through beds filled with a limited number of varieties planted in sequence. They are best viewed from above, which is why a shady belvedere was built two years ago with hammocks so visitors can lounge and admire the view of the garden and the valley beyond.

This years’s theme is ‘Wind and Light’ and parts of the tapis have been filled with grasses and ethereal plants. Local artists have been working on creations to support this theme – one has built a network of flowers and leaves which seem to float over the garden, emphasising the ‘Wind’ while the other has suspended thousands of glass shards over the rose alley and carp pond: the ‘Light’.

The Jardin des Paradis is a tourist attraction open from April to October with many different festivals throughout the season aimed at all ages. On 29-30 June a festival has been organised specifically for children, with street theatre, clowns, storytelling near the water and a special reading area. There are also workshops for the youngsters, where they are taught how to make toys out of vegetation and create paints from natural plant extracts.

For the past two years the garden has been focusing on its educational role. Visits and workshops are organised for local schools and two partnerships have been formed. One is with a school who use the garden as a stepping stone for students interested in horticulture as a career and another with an organisation that produces rare wheat varieties. The seeds have been sown at the Jardin des Paradis and the resulting harvest will be used to supplement diminishing seed supplies.

The garden also works closely with the LPO (the equivalent of the Bird Protection League) and has erected nesting boxes, owl houses, bat boxes and insect hotels throughout. Of course being organic, no chemical insecticides or herbicides are used here, and plants are carefully selected to complement one another.

From an organisational point of view, the Jardin des Paradis is overseen by an ‘association’ and the daily duties are carried out by a small team of paid staff and many volunteers. Members are encouraged to become volunteers and can come as often or as little as they wish. Any help is always gratefully received, whether it’s getting your hands dirty in the flower beds, serving drinks in the café which is situated on the shady terrace overlooking the garden or preparing nibbles for the summer evening apéro concerts.

Before opening and closing each season there is always plenty of work to be done and because the membership encompasses many nationalities, volunteer days often turn into impromptu language classes with French, German, Swiss, Dutch and English all working alongside each other.

For myself and the other volunteers, it has provided the opportunity to meet up with like-minded people, swap ideas (and plants) and to learn and practise speaking French. It has also provided a year-round interest, because although the garden may be closed from October to April, the work doesn’t stop. There’s always the five Ps – planning, pruning, propagating, planting and paperwork – to keep everyone busy.

The garden is open to the public from 27 April to 6 October 2013. For more details and opening times visit www.jardindesparadis.eu