4 ports of call in Normandy and Nord-Pas-de-Calais 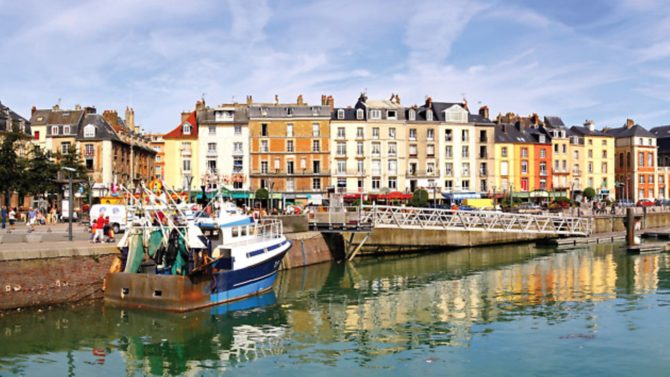 Travelling across the coastal landscapes and townscapes of the Channel ports of France has allowed me to enjoy the huge variety of cultures, cuisines and even languages that the northern French regions have to offer.

With inhabitants of Brittany, Normandy and Nord-Pas-de-Calais fiercely proud of their unique cultures, some of them don’t even consider themselves to be French! Many expats cite this individuality of each area as one reason they moved to France, and with so much variety in the northern parts of this eclectic nation, just a short hop across the Channel, these areas are serious contenders when it comes to buying a home in France.

Having left Brittany behind last month, and entered into the region of Normandy, we continue along the coast in this issue to the busy port towns of Le Havre, Dieppe, Calais and Dunkirk.

For users of the ferry network, Le Havre is the gateway to Paris, with the French capital being just a two-hour drive away. Its convenient position means that road links across Normandy are excellent directly from the port, ideal for accessing resorts such as Honfleur to the south (30 minutes from the ferry port) and Étretat to the north (35 minutes).

As with many port towns, there is plenty to do in Le Havre, and what it lacks in history it makes up for in culture. The Malraux Museum houses the largest collection of Impressionist works after the Musée d’Orsay in Paris and is one of five highly regarded museums, the others being the Natural History Museum, MuMa (museum of modern art), the Museum of Old Havre and a religious art museum.

For sporty types, the town also boasts the largest skatepark in France, while the docks and beach are home to a fantastic cycle track and a modern water park.

The average property price in the Seine-Maritime department is €153,000, according to Notaires de France figures, although this does increase to €157,600 in the Le Havre sector. This is not the most expensive sector though – the regional capital Rouen comes in at €165,000 – and it is also less than the national average of €159,000.

A fashionable holiday destination in the early 19th century, Dieppe in Upper Normandy’s Seine-Maritime department lays claim to the fact that it was the first seaside resort in France. While it eventually lost out to newer, more chic resorts further along the coast, the town retains a sense of charm, with its promenade along the old quay and narrow streets encircling Église St-Jacques, the impressive Gothic cathedral.

Dieppe’s strong relationship with the sea continues, with fishing being a major industry in the town. Each Saturday, the streets and jetties are filled with the smells of the sea, as fishermen market their hauls of giant whelks, oysters and mussels.

The town plays host to a number of festivals throughout the year, the most popular being the international kite festival, La Fête des Cerf-Volants. During the summer, Dieppe also holds the Wednesday Show, in which free family-friendly events are held each week, ranging from outdoor music concerts to circus performances.

At just €122,800, the average property price in the Dieppe sector is more than €30,000 below the average house price in Le Havre. This makes Dieppe the cheapest port town in northern France in which to buy a property, and when combined with its charm and ease of access it really is a wonderful place to own a second home.

The Dover to Calais crossing is the most popular route across the Channel, due to the short journey time and excellent transport links on both sides. In fact, the Strait of Dover is the busiest seaway in the world, with over 400 vessels using it every day. Both ports have been major world trading posts since the Middle Ages, and from 1347 to 1558 Calais was even annexed by England, which wanted to control the port itself.

While anyone who studied French at school has probably been on a day trip to see the large squares and neo-Flemish architecture of Calais, the unsung hero of the town is the soft sand of its beaches, where you can rent one of the striking white beach huts, and watch the huge ships sail by.

Most expats in this area tend to settle along the coast to the south of town, known as the Côte d’Opale. The rugged isolation of the chalky headland Cap Gris Nez is not to be missed when exploring this coastline, while the resort towns of Wissant and Boulogne-sur-Mer provide excellent restaurants and a friendly expat community.

As is the trend in the northern band of departments, property prices are again below the national average in this area. With an average house price of €132,500, the Pas-de-Calais department is almost €30,000 less the national average of €159,000. This falls to €128,500 in the Calais sector, while the more popular Boulogne comes in at a higher figure of €140,000.

In its vulnerable position at the northernmost tip of France, Dunkirk is famed for its destruction in 1940, and the surrounding Nord countryside is filled with reminders of its tragic past. Arriving by ferry, any visitor’s first trip should be the Mémorial du Souvenir museum built into the town’s coastal defence fortifications, before visiting the maritime museum Musée Portuaire.

With over 650 military cemeteries in the Nord-Pas-de-Calais region, there are numerous opportunities for further historical explorations. Within the Dunkirk commune itself there is a particularly poignant Commonwealth military cemetery, home to the Dunkirk British Memorial which honours 4,500 soldiers with no known grave.

Culturally, this area can seem quite different from much of France, with strong beer and even stronger cheese taking the place of the more characteristic wine and artisanal pâtisseries. Ch’ti beer and Bière de Garde are not to be missed.

At €150,000, the average property price in the Nord department is €10,000 under the national average of €159,000, according to Notaires de France figures. There is a slight increase in prices within the Dunkirk sector, where the average rises to €153,000, but this is still well below the national average. The Lille sector is the most expensive at €177,600, which is unsurprising as it is the capital of the Nord department.