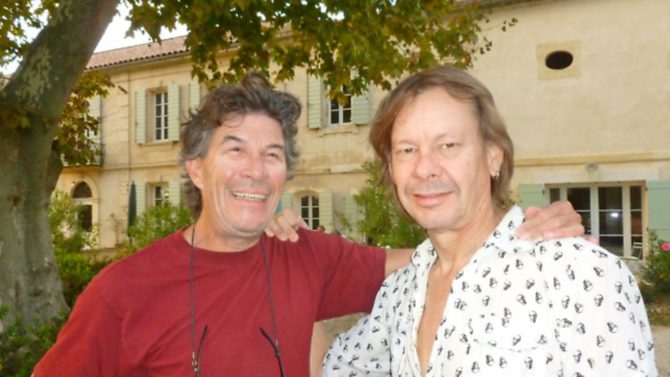 Overlooking sweeping open fields that take the eye north to the Alpilles and south to the Camargue, Mas de l’Hermitage stands near Saint-Martin-de-Crau, close to the ancient city of Arles.

It is the home of Tony Spit and Bernard Balet, who grasped the opportunity of early retirement with both hands, and bought themselves this little piece of Provence just over a decade ago.

When they found it, the property was a complete ruin, but a lot of hard work brought it back to life, and they now rent out parts of it to those visiting Bouches-du-Rhône.

The couple had both left their jobs around the same time, and together they formed a plan for the next chapter in their lives.

“We came down here for the sun, for the culture, and for the weather,” Tony explains. “And then I thought: ‘I’ve got to do something’, and so we decided on a gîte.”

They found Mas de l’Hermitage by accident after several fruitless house-hunting trips. Initially, they looked around Nîmes but found nothing; then on a weekend visit to stay with friends near Arles, they struck gold.

“I’d said I wasn’t looking for a house this time, and then we saw Mas de l’Hermitage and that was it,” Tony says. “It was a complete ruin. There were sheep in half of it. There was absolutely no garden, and it was unfit for human habitation.”

Fortunately, they could both see the potential beneath the dilapidated exterior.

“It was a nicely proportioned building. It was in the country, on a working farm, and surrounded by open fields, and yet it was also accessible. We liked its classical lines and it rang all the right bells.”

They bought Mas de l’Hermitage in 2002, and then began the renovation work required to turn it into the beautifully restored holiday haven it is today.

“The major work was getting rid of the rubbish, getting down to the basics, and then building it back up again,” remembers Tony. “All the stone was in a bad state and had to be redressed; some rooms didn’t have a floor, so we needed to put those in; and bathrooms.

“Some parts of the building were built in the 17th and 18th centuries. It was built in sections as a family house would have been, and it has grown with the generations. Some of the sections are extremely old and we had to address all that.”

They converted the old mas (traditional farmhouse) into four stylish apartments with en-suite facilities: three, which they rent out, and a fourth, which they have as their home.

“I spend most of my time here and Bernard is here in summer,” says Tony. “In the summer months we have to be at home, so we can’t go away on vacation, but on the other hand, it’s a holiday every day here in summer. We have family all around Europe, so during winter we close the shutters, shut everything off, and then we are all over the place; catching up here and there.”

A second transformation occurred outside. The house stands on the edge of open fields where the finest hay is produced; hay so fine, in fact, that it is the only product produced in France, not for human consumption, which enjoys AOC status: le foin de Crau.

The downside of living next door to such riches, however, are the grass seeds which respect no boundaries, and which had turned the land around Bernard and Tony’s farmhouse into an overgrown mass of weeds.

“There was no garden; absolutely nothing,” says Tony. “It was more a meadow.”

Undaunted, they beat back the wilderness, and working with the natural restrictions imposed both by the lay of the land, and some mature trees, which they didn’t want to lose, they have created a beautiful garden to match the tastefully resurrected mas.

“We started off with a rough idea, and then we worked with what was already here,” he explains. “We have irrigation canals that run around the place and the root systems of the three plane trees – there was no way I was going to damage those! We never wanted a formal garden so it’s just evolved slowly as we’ve gone along.”

Their pool is a perfect example of deciding to work with nature rather than to fight it.

“Originally we wanted a sunken pool, but the workmen quickly hit bedrock and when they said they’d have to bring in dynamite, I thought it would just be easier to raise the pool up a bit; so we have a raised pool, which I prefer now,” says Tony.

The plants they chose for the garden are ones which thrive best in Provence but not, as you might think, because of the arid climate.

“Ironically, the one thing we’re not short of in summer is water, as the grass fields are flooded once every 10 days and we get that water too,” says Tony. “Water is not a problem but the quality of the soil is, and we’ve found by trial and error that the traditional Provençal plants grow the best.”

The renovation took about three years and once the apartments were finished, Tony and Bernard, who between them speak fluent French, English, and Dutch, began renting them out. They started slowly, initially with friends, but then grew, and now they welcome visitors from all over the world.

“I offer a five-course meal on the day our guests arrive and on occasion we’ve had something like 11 languages around the dinner table,” says Tony. “Everybody gets on. Even if it means that the conversation has to bounce between two people at first, it all works. A lot of people think they would find it intimidating but really it’s not, it’s great fun.”

They are perfectly positioned so that there is plenty to do and see within easy reach, for both seasoned visitors to Bouches-du-Rhône and first-timers.

“There’s a lot happening in Arles: there’s the international photographic festival; there’s a music festival; there’s the bullfight if you’re into that, although we don’t encourage it,” says Tony. “One of the attractions of this area is that it is a bit of everything. To the north of us it’s typical Provence; not even half an hour’s drive and you’re in Saint-Rémy-de-Provence. In between you have the Alpilles, which I can see from my kitchen window, and then you get into the grasslands of La Crau, and on into the Camargue which is 10 minutes’ drive from us. In half an hour you’re at the beach, so whatever you think of as Provence, we’ve got a bit of it. If you want vineyards, we’ve got vineyards; if you want wild horses, we’ve got those too!”

They feel very at home here, are well known in the village and join in with many festivities, and they thoroughly enjoy helping guests get to know this magical part of France, many of whom return year after year and have become friends.

“It is a surprisingly active area for a place with such a sleepy reputation,” says Tony. “And it’s a great place for kids, too, because we are in the middle of fields. Children are easy to spot in a field of grass!”

In fact, the only danger of their long Provençal summers is feeling that they are constantly on holiday.

“The first year, that was a problem,” Tony says. “The days often end with evening socials … and you have to watch your liver! We had to say: ‘Ok, now we have to work!’”

That said, they agree that as a problem it’s not a bad one to have – and look forward to many more years enjoying sharing Bouches-du-Rhône with their guests.

Find out more about Bouches-du-Rhône and read our interview with a local estate agent.

If you’re interested in setting up a B&B or gîte in France, make sure you read our how-to guide first!

Previous Article Q&A: Paying for a French property in sterling
Next Article 4 ports of call in Normandy and Nord-Pas-de-Calais