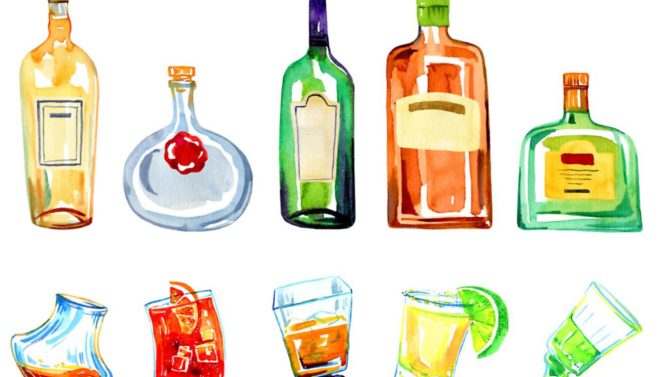 Whether you’re drinking them as an apéritif or in a classic cocktail, there are plenty of ways to enjoy a French liqueur. Here are some of our French favourites to try on National Liqueur Day on 16th October

Made from blackcurrants that are crushed and soaked in alcohol, crème de cassis is a speciality of the Burgundy region and Dijon in particular. Before it became known as crème de cassis, it went by the name of ratafia, a word given to a liqueur made from fruit.

Produced in the Armagnac region of Gascony, this type of brandy is the oldest distilled in France and in the past was consumed for its health benefits. It is traditionally distilled once and can be made from 10 different types of white grape, of which four are most common.

Produced in St-Barthélemy-d’Anjou in Maine-et-Loire, Cointreau is an orange-flavoured triple sec liqueur that is consumed as an apéritif or a digestif. The Cointreau Distillery was set up in 1849 by Adolphe Cointreau and the production methods and recipe remain a closely guarded secret.

According to the story used in the marketing campaign, Bénédictine was developed from an original recipe used by monks at the Benedictine Abbey of Fécamp in Normandy. Flavoured with 27 flowers, berries, herbs, roots and spices, it is particularly popular in Burnley in England where it is served with hot water and known as Bene’n’hot, after soldiers from the East Lancashire regiment developed a taste for it in France while stationed there during the Great War.

Inspired by a raspberry liqueur made in the Loire Valley in the 17th century, Chambord is made from raspberries, blackberries, Madagascar vanilla, citrus peel, honey and cognac. It is said to have been introduced to King Louis XIV during one of his visits to the Château de Chambord.

Made by the Carthusian Monks since 1737 and named after their Grande Chartreuse monastery located in Grenoble in Rhône-Alpes, Chartreuse is available in green and yellow versions and is composed of distilled alcohol aged with 130 herbs, plants and flowers. However the exact recipe remains a closely guarded secret. After a day on the ski slopes you can look forward to warming up with a Green Chaud, the ultimate hot chocolate made with a generous shot of Chartreuse.

Particularly popular in Marseille, pastis is flavoured with aniseed and liquorice root and was first commercialised by Paul Ricard. It emerged some 17 years after the ban on absinthe and is normally diluted with water before drinking.

This sweet and fruity eau de vie is made from the William pear and some producers include a whole pear in the bottle – when the fruit is small, the bottle is attached to the tree branch and the pear grows to maturity inside it.

Produced in Provence and named after the Occitan verb requinquilhar (to cheer up or invigorate), this white wine-based aperitif is flavoured with three different types of peach and peach tree leaves. It goes well with tonic or served long and over ice.

Cocktail to try: Speedbird to Rinquinquin

This French liqueur is made with fresh elderflowers that are hand-picked once a year in late spring and has up to 1,000 elderflower blossoms in every bottle. Using age-old techniques, the blossoms are macerated over the course of several hours to produce an infusion that is then blended with other ingredients including eau-de-vie de vin and sugar.

Three French drinks you should be making cocktails with

How to serve champagne