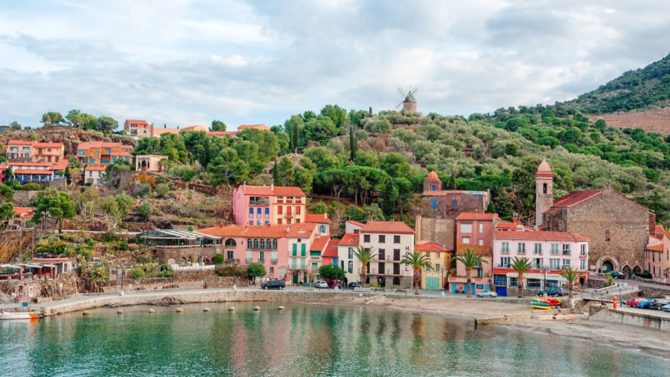 Collioure is often called the St-Tropez of the Languedoc Roussillon, but its profile is much lower…and so are the house prices!

Collioure has quite a reputation to live up to…and it doesn’t disappoint. It is known as the jewel in the crown of the Côte Vermeille, a length of coastline that stretches from Argelès-sur-Mer to the border town of Cerbère in Pyrénées-Orientales, even though it is the smallest resort along this beautiful stretch of coast. It is also nicknamed the St-Tropez of the Languedoc-Roussillon even though it is clearly lacking in super yachts, crowds and exorbitant house prices. But then, that’s what makes it so special. Here are nine great reasons why the port is an excellent place to buy property.

Collioure has a great climate. According to Météo France, the town and the rest of the Vermeille coast, basks in almost as many sunshine hours as the Côte d’Azur, with 2,465 annual sunshine hours recorded in Perpignan compared with Nice’s 2,724.

July and August temperatures are comparable to the Côte d’Azur’s, but summers are not quite as dry, so there’s slightly more greenery and fewer barbecue bans!

With its turquoise bay, bright fishing boats and rosy-coloured buildings set against the backdrop of the Pyrénées, Collioure looks straight out of a painting. And so it is! Many a famous artist has been drawn to its picturesque beauty and special light. See below.

Dominating the bay are the Château Royal, built by the Knights Templar in 1207, and the striking Notre-Dame-des-Anges church with its iconic pink-domed bell tower that was originally built as a lighthouse, while up on the hill stands the region’s oldest windmill.

3. It won over Picasso, Matisse and friends

Collioure has fewer than 3,000 residents but no fewer than 30 art galleries and workshops. Artists Henri Matisse and André Derain happened upon the town in 1905 and were instantly captivated by its ‘special light’, which inspired them both to put brush to canvas and marked the beginning of the Fauvism movement. “No sky in all of France is bluer than that of Collioure,” said Matisse, whose most famous works include Les toits de Collioure and La fenêtre ouverte. He was soon joined by other artists including Raoul Dufy, Charles Rennie Mackintosh and Pablo Picasso, which led to the town’s reputation as the cité des peintres.

The family-run Hôtel des Templiers on Quai de l’Amirauté has some 2,000 original works of art lining its walls bearing witness to the many artists – Picasso among them – who have passed through over the years.

Today, reproductions of Matisse and Derain’s works can be seen throughout the town, sited on the spots where the artists would have set up their easels all those years ago, while strategically placed empty picture frames allow visitors to visualise a scene as the painters would have viewed it. In fact the whole town almost feels like one big art gallery, or even a painting in itself created from a palette of salmon pinks, soft pastels and bold blues.

Just 20 miles from the Spanish border, Collioure is actually closer to Barcelona than it is to its French regional capital Toulouse. While confidently French, the town shares a lot of history and culture with Catalonia. You can see it in the yellow and red Catalan bunting that flies alongside the French flags and taste it in the wonderful cuisine. (See more below).

Collioure has good public transport links including a train station connecting the town to the city of Perpignan in 20 minutes and Occitan capital Toulouse in as little as three hours. The train line hugs the coast so you can also hop on and off at other Côte Vermeille resorts such as Port Vendres, Banyuls-sur-Mer and Cerbère.

Why you should buy a house on the Occitan riviera

You’re not alone: advice for solo buyers of French property

6. It has fabulous wines

Some 1,800 hectares of vineyards are spread across Collioure, Port-Vendres, Banyuls and Cerbère producing AOC Collioure and Banyuls red, white and rosé wines. Neat rows of vines line the slopes surrounding the bay and a great way to see them is with a ride on the Petit Train Touristique, which also provides postcard-worthy views of the bay below.

The town’s many bars and restaurants provide ample opportunity to try the local tipple while cellar tours and tastings offer the perfect way to learn more.

7. It has cool cuisine

Collioure’s cuisine is where the fusion of French and Catalan culture is perhaps most evident. The traditional Catalan dish fideuà, similar to paella but made with short spaghetti-like pasta instead of rice, is a speciality and one not to be missed, especially when accompanied by a chilled glass of Collioure white or rosé.

Fresh seafood is very much the order of the day, so fresh in fact that you can almost imagine it has jumped straight from the sea to your plate, especially when you’re dining al fresco at a restaurant on the beach.

Meanwhile anchovies have played a vital role in Collioure’s economy for hundreds of years, and the town’s two remaining salting families continue to prepare the fillets in the original traditional way. The whole process is carried out by hand with no assistance from modern machinery, and the end product is a far cry from the sort of anchovy you might be more accustomed to finding on a pizza. There’s even a festival held in June each year to celebrate the town’s star product.

8. House prices are lower than on the Côte d’Azur

If you are looking to buy a home in Collioure, you’ll find your money goes a lot further than it would on the other French Riviera. Collioure not only comes without the crowds of glitzy St-Tropez but without the eye-watering property prices.

According to Notaires de France figures, the average house price in the Pyrénées-Orientales department is €176,900 while for an apartment it is €1,830/m2.

Specifically on the sought-after Côte Vermeille, which includes Collioure, Argelès and Banyuls, the average house price rises to €184,300. However, this is still a long way short of the €2m or more you’d be expected to shell out for a typical house in St-Tropez and still a lot lower than the Alpes-Maritimes average of €430,000.

“The pretty town of Collioure has always been a popular place to buy a property and continues to be so, although property prices have dropped by approximately 10% in comparison to 10 years ago,” says Donna Tulloch, an agent with Leggett Immobilier who moved to Pyrénées-Orientales in 1998. According to Donna, one-bedroom apartments with a sea view start from just over €200,000, while prices for a four-bedroom villa with swimming pool and small garden might start from €550,000.

9. It’s a good place to rent out property

“Many buyers are looking for second homes with good rental potential,” adds Donna. “Renting out a property in Collioure is easy as the town is well known for its art and culture, wide choice of restaurants and amenities and, of course, its pretty beaches.” Should you be looking to buy a second home as an investment property, Eve Maltese of estate agency Beautiful South, based in nearby Perpignan, agrees that Collioure has good rental prospects. “A villa with four bedrooms and a swimming pool could be rented for more than €3,000 per week,” she says.