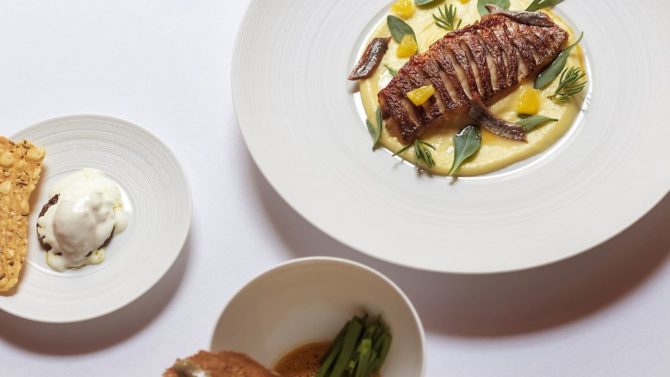 Cuisine inspired by France is celebrated in the prestigious annual list

Michelin Great Britain and Ireland has unveiled its stars for 2020 including many winning French chefs and Gallic restaurants around the UK.

One of this year’s highlights is the promotion of sketch – The Lecture Room & Library, in London, from two to three Michelin stars.

Led by French Masterchef Pierre Gagnaire and Head Chef Johannes Nuding, The Lecture Room & Library, in Mayfair, was awarded its first Michelin star in 2005 and its second star in 2012.

Conceived by restaurateur Mourad Mazouz and three Michelin-starred chef Pierre Gagnaire, the multi-functional dining venue is housed in a Grade-II listed building, which was formerly the headquarters of both the Royal Institute of British Architects and the London atelier of Christian Dior.

Pierre said: “In 2002, Mourad Mazouz, founder of sketch, offered me the opportunity to open my first restaurant abroad and since then, with the women and men of our team and with the unconditional support of Mourad and Sinead Mallozzi, CEO, we have succeeded in making sketch a lively, welcoming, original place where our customers find a high level of quality, new flavours and an atmosphere that make me happy and proud.

“Sketch is a restaurant that is close to my heart and I hope that with this recognition of all our efforts, we will continue to introduce this unique place to new customers in the same spirit of excellence. Thank you, from the bottom of my heart.”

Gwendal Poullennec, International Director of the Michelin guides, added: “Our inspectors judge the cooking here to be wonderfully complex and highly original, with each element of the meal excelling in terms of structure, composition and, above all, flavour.”

Sketch joins Alain Ducasse at The Dorchester, in Park Lane, London, which has retained its three Michelin stars along with The Waterside Inn in Bray, under the leadership of Chef-Patron Alain Roux.

Other establishments to retain their two stars include Le Gavroche, Hélène Darroze at The Connaught, which has recently reopened following a full refurbishment and Claude Bosi at Bibendum in London, along with Raymond Blanc’s Belmond Le Manoir aux Quat’ Saisons in Oxfordshire.

Also toasting one star outside London are Fraiche in Birkenhead, Le Champignon Sauvage in Cheltenham, L’Ortolan in Shinfield and L’Ecrivain in Dublin, Ireland.

In total there are 187 Michelin-starred restaurants featured, including one new three star, four new two stars and 23 new one stars.

Find more about the Michelin Guide at guide.michelin.com/gb