Why Brexit made us even more determined to move to France 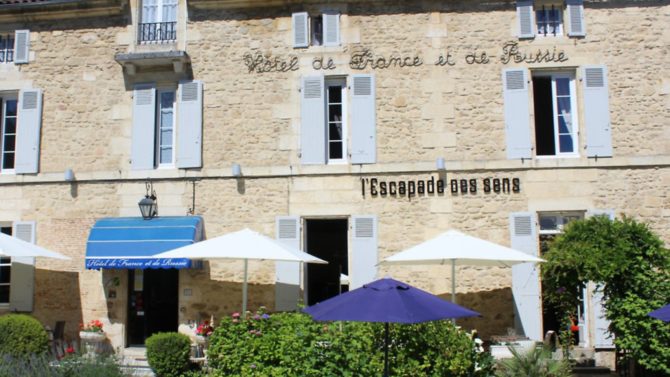 Encouraged rather than discouraged by Brexit, Sharon and Adrian Finch bought a hotel in Dordogne in 2016 and have since teamed up with a young French chef to open a restaurant for their guests and the local community

“We were working long hours and not seeing each other, and we began to question what it was all about,” says Sharon Finch. “So we decided it was time to have some adventure in our own lives.”

Chiropodist Sharon and supermarket manager Adrian had always considered running a gîte or chambres d’hôtes in France, but when they learned of a hotel for sale in Thiviers, Dordogne, they arranged to go and see it.

“We viewed the hotel and thought it had potential,” says Adrian. “So we went back to the UK and put our house on the market, sold it, and moved ourselves down here in a rented truck – which broke down on the way and had a tyre blowout!”

Built in 1776, the Hôtel de France et de Russie as it is now called has been a coaching inn, tax collecting office, bank, and private residence, and Sharon and Adrian became the new owners in 2016, the year of the EU referendum. The result of the Brexit vote did little to make them think twice about what they were doing – in fact if anything, it encouraged them even more.

“It actually made us even more determined,” says Adrian. “I enjoy living in Europe so was glad to be leaving the UK to continue doing so. Fortunately I had arranged a forward contract for the currency when the exchange rate was favourable. If I hadn’t done that and we’d had to pay the exchange rate on the day we bought the hotel it would have increased the cost of buying it by about £70,000, which we wouldn’t have been able to afford so wouldn’t have gone ahead.”

With no previous experience in the hospitality industry and neither of them able to speak French, it was a case of throwing themselves in at the deep end. “Our friends and family kept saying, ‘what are you doing? You’ve got no idea about running a hotel and you don’t even speak the language!'” remembers Sharon.

How to set up a restaurant in France

However, in their first year they managed to double the turnover and also opened a restaurant within the hotel after realising there was a gap in the market. The previous owner offered bed and breakfast only and would direct her guests to local restaurants for evening meals, but these would often be closed out of season which meant there was nowhere for people to eat nearby during the winter months. Sharon and Adrian began to offer evening meals three or four nights a week, which added shopping and cooking to their already busy workload and created a significant amount of extra work.

A solution appeared in the form of 26-year-old Nicolas Cousinou, who called in one day. The young French chef had been working in a Michelin-star restaurant in Limoges and was keen to open his own restaurant in the area. When Sharon and Adrian suggested he use the hotel’s large dining room and kitchen he jumped at the opportunity, investing money in professional equipment and upgrades. Within six months Nicolas had opened his restaurant, L’Escapade des sens.

“We’d never actually tasted his food until the day it opened!” laughs Sharon. “It was a risk on our part but we just knew he was going to be good because he was so passionate about it and put so much effort into making everything look nice. It’s worked out so well for both sides. Nicolas now has a team of five people working for him and the hotel is buzzing all day with a lunchtime and evening service in the restaurant, which is lovely for us.”

The 40-cover restaurant has taken off in a big way, too. Sharon and Adrian’s appearance in series three of A New Life in the Sun gave it a boost early on, and Nicolas’s inventive approach to traditional French cuisine using the best local produce keeps diners coming back for more.

“Being on the programme made a huge difference,” says Adrian. “We were on screen for four evenings and we had 28,000 visits to our website. I don’t think Nicolas was expecting it to have an impact on his restaurant because it was a UK television programme but he had people coming from all over France to eat in it. We have to turn away as many people as we take reservations for but none of us want to compromise on the quality and level of service by trying to squeeze more customers in.

“The hotel desperately needed a restaurant but we couldn’t have done it ourselves – we’re not chefs and the standard of cooking in France is exceptionally high so you really have got to know what you’re doing,” says Adrian. “We’ve given a young French chef the opportunity to open his own restaurant and five local people now have jobs with him too. We see it as one big business; we work so well together and we support each other. We’re so settled here in this lovely market town and we’ve made lots of friends.”

Reality check: what’s it really like to run a gîte in France?

A New Life in the Sun: where are they now?

Previous Article Six super French châteaux for sale for less than €500,000
Next Article Michelin stars 2020 awarded to French restaurants and chefs in the UK