Six super French châteaux for sale for less than €500,000 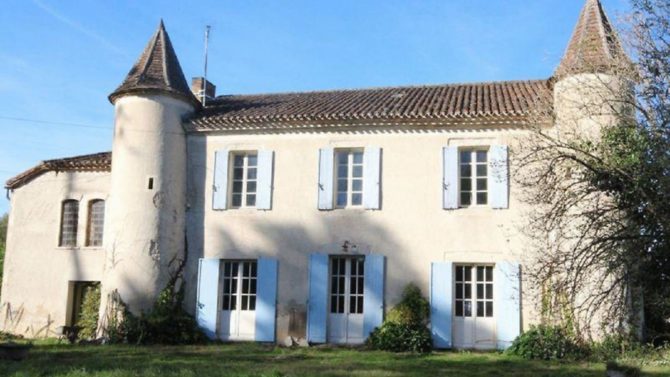 A château in France might be more affordable than you think, so if you have big dreams but a small budget check out these grand French properties on the market

As seen on the popular TV show Escape to the Chateau, this fairytale turreted property was once a hunting lodge frequented by King Henry IV. Set in five acres of parkland with access to the Canal du Midi, it has five bedrooms at the top of a curved oak and wrought iron staircase as well as three large reception rooms with original flooring and impressive fireplaces. There are also exterior courtyard rooms and attached front buildings. In the grounds you’ll find a small lake, two stables, a well and a 16th-century dovecote. Agen is 20 minutes away and the nearest airports are Toulouse, Bordeaux and Bergerac.

If you’re dreaming on a big scale and are not put off by a project, this Neoclassical-style château in east-central France could be for you. Set in more than 18 acres of land, it has been in the same family since 1948 and has a whopping 350m² of space or more on each of the four floors. The property is set on the banks of the Saône close to Jussey and has a symmetrical build with a long and wide central hall. There are currently 15 rooms, several utility rooms, a garage and detached ‘cave’. The current owners have moved out but keep the heating on in the winter to keep the building dry and frost-free.

With its round tower and beautiful stone spiral staircase, this three-bedroom château in the Causses du Quercy regional park is sure to make heads turn. It’s in a quiet edge-of-village location near Labastide-Murat and comes with an extraordinary six hectares of meadow and 4.5 hectares of woodland, so you’ll have plenty of fuel for the many fireplaces. The property has new gutters and electrical wiring, a well, electric heating and a non-compliant fosse septique.

Coco Chanel made her name in Moulins and you too can stamp your style on the place by taking on this elegant château just 15km outside the important Auvergne town. Built around 1625, the property has retained its striking brickwork and other authentic features but requires a little more work to bring it bang up to date (including central heating), although some modernisation has been carried out in recent years. Composed of a rectangular main building with two towers, it has a living space of 335m² with nine main rooms including six bedrooms and two bathrooms. The outbuildings are composed of two buildings – the first with a garage, workshop and former apartment; the other is a large barn. The property is set in grounds of 6.6 hectares that include a French formal garden, a copse and a meadow.

Check out this handsome 19th-century château offering a staggering 750m² of living space with a further 700m² of outbuildings forming a courtyard square. The property is set in 17 acres of parkland, meadow and woodland between the major towns of Niort and Poitiers. Yet it’s only a few minutes’ drive from amenities and close to the motorway. All the château features are here – a grand entrance, parquet flooring, coffered ceilings and lots of fireplaces, spread over three floors and offering eight bedrooms so far with bags of potential for further development. Cabinet le Nail

Why buy a gigantic crumbling pile in the middle of nowhere when you could have a mini château in a buzzing town with a spa, casino, cinema, golf course and racetrack? This high-standard home was built in the 1970s and is within easy walking distance of the centre of La Roche-Posay, a historic spa town an hour south of the Loire Valley and just north of Poitiers. It comes with almost 1.5 acres of gated grounds and has five or six bedrooms, two bathrooms, a garage and an unrivalled view over the Gartempe Valley. At the moment, the tower is used as a dressing room. What would you do with it? Poitiers airport and TGV station are about an hour away.

You’re not alone! Advice for solo buyers of French property

Which documents do I need to sell my house in France