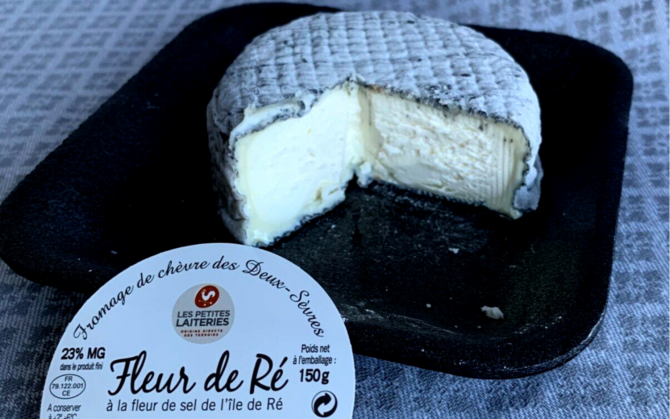 I encountered this modest but distinguished goat’s cheese during a short stay on the Île de Ré, that grassy island joined to the mainland near La Rochelle by a magnificent bridge that resembles a concrete millipede. It’s not the milk but the salt that comes from the island: specifically the ‘fleur, or the refined top layer that’s skimmed off the salt beds that criss-cross the marshier flatlands. The goats derive from the inland département of Deux-Sèvres.

The Petite Laiterie de Fontenille fromagerie in the Boutonne Valley, just inland from La Rochelle, was the result of a merger of the Fontenille atelier with the Petites Laiteries group in 2014. This enabled the bigger enterprise to produce more ’boutique’ cheeses. Among its specialities today are the AOP-labelled Chabichou du Poitou and the Fleur de Ré.

It’s a small, compact cheese made from lightly heated unpasteurised milk weighing around 150g. I opted for the cendré rather than the classique version.

The soft, slightly pleated crust is dusted with blue-black wood-charcoal powder to help keep the snow-white interior moist but firm, and enhance a flavour not dissimilar to the more renowned Selles-sur-Cher: subtly salty and not overpoweringly ‘goaty’. The fromagerie boasts that the curds are worked for three days before being ladled into moulds and then matured in a hâloir, or drying room. This extra time no doubt accounts for the dense chalky texture that gives this soft, unctuous cheese real substance. You can, in other words, savour the flavour before it melts on the palate.

Consensus of opinion suggests that a Fleur de Ré is best accompanied by a white wine; perhaps a Saumur or a lesser- known Vin de Thouarsais, since both are produced in Deux-Sèvres.

TasteofFrancemag.com is a celebration of French cuisine in all its forms. Savour local produce in characterful markets, tour France in search of new foodie experiences and enjoy classic French food, wine and recipes. In addition to this, the latest mouth-watering edition of Taste of France magazine is packed with fabulous French recipes to try at home, from old favourites to classics with a nifty twist, to the very best modern fusion dishes and Michelin chef-inspired treats which are sure to wow your friends and family. Previous Article Galeries Lafayette: A French Icon
Next Article Book Competition: Win a copy of A Year at the French Farmhouse