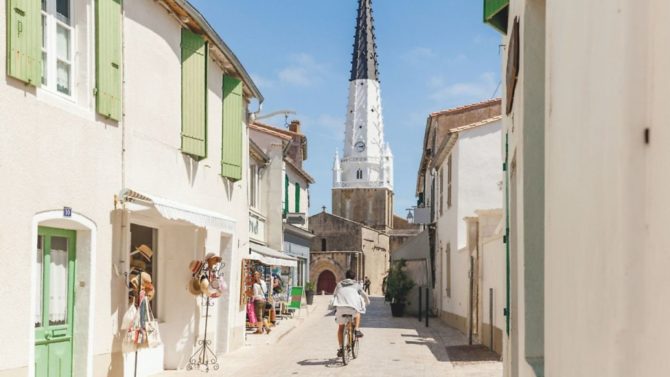 What could be more perfect than a sunny Atlantic island, full of pretty blue-shuttered homes and villages? One peppered with traffic-free, signposted bicycle paths

I’m heading towards what looks like the end of the world. The towering form of the Phare des Baleines looms ahead of me, marking the most westerly point on the Île de Ré. Tragically named for the number of whales that used to end up beached on the headland, the 57 metre-high lighthouse was built in the 19th century to replace the original constructed by Vauban nearly 200 years earlier. Vauban’s tower still sits nearby.

Windblown and slightly awestruck by the swell of the Atlantic stretching off into the distance, I’m ready to finish my cycling tour of the island with a final short stretch back to Ars-en-Ré where I’ll hand back my rental bike at Cycland.

For someone who lives in one of the UK’s hillier and damper areas, it’s been an absolute revelation meandering by bicycle around an island that’s sunny, flat and 100% committed to encouraging cycling. Signposted paths crisscross Île de Ré, most segregated from traffic, making it a genuine option to leave the car at your accommodation and spend your stay exploring on two wheels.

Thirty kilometres long and just five wide, it’s perfectly feasible to cycle around the whole island in just a leisurely couple of days, taking in the sights along the way.

Starting out on my bike at La Flotte with its picture-perfect medieval market place, crammed with delicious-looking saucisson, oysters, wine and all manner of local comestibles, it wasn’t long before I found myself in Saint-Martin-de-Ré.

The closest Île de Ré has to a bustling metropolis, the fortified town was shaped by Vauban (yes, him again) and has two gates and an impressive 14 kilometres of ramparts. One of the best ways to view the complex geometric masterpiece of the ramparts is from above.

The bell tower of the town’s 14th-century church offers the perfect vantage point and panoramic views, if you’re not frightened of heights (or the 117 steps up to the top). Wandering around the harbour, the charms of the island’s capital are clear. Smart places to eat sit next to shops selling nautically-themed bits and pieces for your home, arts and crafts and expensive clothing aimed mainly at the chic summer visitors.

It’s a living and breathing town, but still shows its colours as a tourist hotspot. In July and August visitors far outnumber local residents.

Pedalling out through one of the fortified town gates, I was soon following a traffic-free cycle path, passing some of the famous shaggy Poitou donkeys grazing peacefully in a field beside what passes for a main road on Île de Ré.

They may not be used for salt collecting duties any more but these perpetually mournful looking beasts still have a very important role to play, as Instagram stars.

The trail took me through vineyards (even this small island produces wine) before contouring towards the sea. The Atlantic is never far away in Île de Ré and its salty tang is always fresh on the air.

Tiny villages of single storey houses, wooden shutters decorated with a strictly limited palette of colours, came and went, signposts on the cycling route always showing distances to a variety of possible destinations.

It’s pretty much impossible to get lost. I passed through sleepy La Couarde-sur-Mer (not so sleepy in the summer), glimpsing the sea once again as I headed towards Ars-en-Ré, crossing what would once have been a causeway between separate islands.

The town’s black-tipped church spire clearly visible from across the marshes, Ars-en-Ré easily justifies its plus beau village title, but its 60 or so active salt producers mean it’s not just a pretty face.

It is this end of the island where the marshland starts to take over and a much wilder feeling landscape opens out, all wide skies and oyster beds.

One of the most special areas to cycle on Île de Ré is the nature reserve at Lilleau des Niges. Narrow stony trails meandered between oyster beds and salt marshes, the cries of seabirds as constant a companion as the water itself.

This is a haven for thousands of birds, some on their migration between the Arctic and Africa, others permanent residents. It’s a birding paradise.

Leaving the nature reserve, I was soon back at the coast. The secluded cove of the Plage de la Patache showing that sandy beaches aren’t exclusive to the south of the island, even though more plentiful there. What a place to take a breather before making for one of the final highlights of the island, the Phare des Baleines.

I’m a little bit tired as I finally pedal back into Ars-en-Ré, but it’s been an incredibly scenic and soul-lightening cycle ride around the Île de Ré. Sunshine, intense maritime light and that ever-present sound and smell of the ocean matched perfectly with easy-to-follow traffic-free paths.

Even for a non-cyclist, surely that’s a winning formula? I’ve earned my bowl of mouclade though, that’s for sure.

Ryanair operates year-round flights and easyJet, Flybe and Jet2 all operate seasonal flights to La Rochelle, the nearest airport. Hire a car or take a taxi to Île de Ré, then use a bicycle to explore.

Take a stroll in the village of Lavardin

Take a stroll in Chédigny