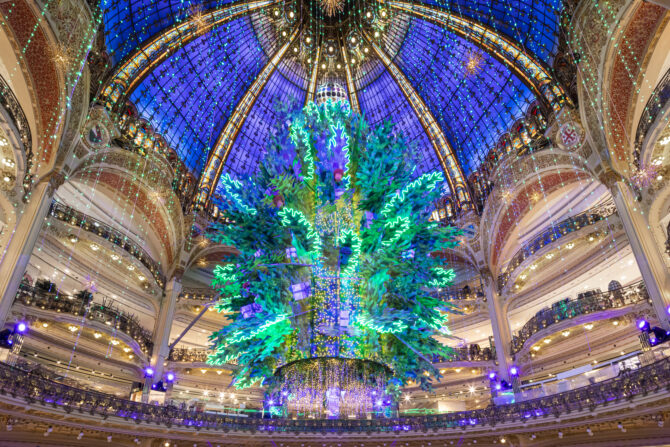 More than a shopping centre, this luxurious department store comes into its own in the season of sparkle…

Along the busy but beautiful Boulevard Haussmann, tourists and shoppers alike flock each day to visit the glamorous Galeries Lafayette department store in Paris. With a cut-stone Haussmann- style exterior and Art Nouveau interiors, a 43m-high dome with Neo-byzantine style stained- glass windows designed by Jacques Gruber, opera-like balconies overlooking the great hall sales floor below – this store is a sight to be seen. At this time of year, the store has an especially magical aura with the central dome hosting some magnificent and memorable festive creations that never fail to make a lasting impression.

Christmas Decorations at the Galeries Lafayette

The store was first dressed for the holiday season in 1920 but it was in 1976, two years after the central staircase designed by Louis Majorelle had been removed from the great hall, that a tree was placed in the centre of it. Hung from the dome that year was a 23m-high, 1.6-ton aluminium extravaganza with 160 silver baubles. A century later, one of the most well-known Christmas designs is from 2014, when the pink and purple sapin de Noël was installed upside down. It was part of the ‘Monstrous Christmas’ theme – the mischievous fluffy creatures which sat in the window display that year had run amok and turned the tree on its head. In 2019, the theme was ‘La Ruche de Noël’ (the Christmas hive) with a queen bee topping the fir and her beaded subjects dancing in the air around it.

This year the talented teams from Galeries Lafayette and Bournillat have created a wonderful experience in which window displays along Boulevard Haussmann tell the tale of Nordmann, a Christmas tree from the planet Elato and his visit to Galeries Lafayette Paris Haussmann. You can find out more about this magical story and the sound and light shows that bring the trees to life every 30 minutes here.

This Christmas, Galeries Lafayette invites you to experience a family trip with your children to the heart of the Christmas tale, with an immersive and animated presentation by the illustrator and the novelist. You can book free tickets and enjoy the experience between 17th and 23rd December: BOOK NOW

There’s also Santa’s Grotto where you can get your photo taken with Father Christmas!

The History of Galeries Lafayette

Looking at the flamboyant decorations it can be hard to believe that when the store first opened in 1893 it covered just 70m²-around the size of a two- bedroom apartment. The shop was run by Théophile Bader and Alphonse Kahn, two cousins from Alsace in the north-east of France, who bought the property on the corner of Rue La Fayette and Rue de la Chaussée d’Antin to sell novelty items. Located just across from the Opéra Garnier and near the Saint-Lazare railway station there was plenty of foot traffic and therefore potential customers in the area to make the business successful. After just a few years they were able to start expanding the shop, buying up adjacent properties including those on Boulevard Haussmann and Bader’s ideas and ambitions for the site grew with it. It was October 1912 when the Galeries Lafayette was first inaugurated as the ‘luxury bazaar’ he dreamed of, with 96 departments and soon a tea room and a rooftop terrace. This was also when they first began illuminating the store front for special events.

Today the brand has expanded far beyond this one location. There are 30 Galeries Lafayette stores across France, as well as eight international locations including Berlin, Beijing and Istanbul. Just last year a third location was added in Paris – a luxurious Art Deco-style store covering 70,000 square feet on the Champs-Élysées, which became the largest retail on the famous avenue. space The Haussmann branch is still in action and there is now a cluster of three buildings there – the main eight-storey store with an exhibition space on the first floor, the three- storey men’s section across the Rue de Mogador and, across the Boulevard, the Maison & Gourmet (food and home) building. As the retail business continues to thrive it has also recognised the importance of sustainable production and digital platforms as part of its ongoing evolution.

Previous Article See inside: A £47,000 renovated French cottage with a barn for sale
Next Article Cheese made on a French island: Fleur de Ré fromage