Take a journey through France with the FRANCE Calendar 2022 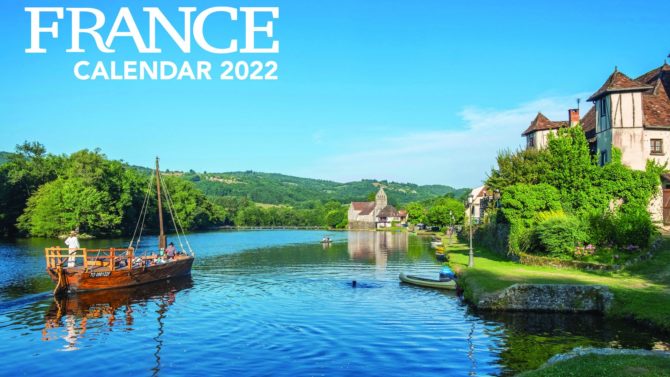 Here’s a sneak peek of what’s inside this year’s FRANCE Calendar, carefully curated by the team behind FRANCE Magazine. The glossy photos of some of the country’s finest destinations are sure to bring a smile to the face of any Francophile.

ON THE COVER: Beaulieu-sur-Dordogne, Corrèze

Choosing our cover star is always one of the trickiest parts of putting together the FRANCE calendar. When we found this vibrant image of Beaulieu-sur-Dordogne, we knew it was a winner! This waterside town in Corrèze is nicknamed the Limousin Riviera thanks to its pleasant climate. In the image you can see an icon of the River Dordogne: a gabare. Take a ride on this traditional flat-bottomed boat to see Beaulieu from a whole new perspective.

The magnificent Place de la Bourse is surely Bordeaux’s most photogenic landmark. It was constructed in the early 18th century in the place of the city’s medieval walls. Elegant buildings and a striking fountain frame the grand square, where the Miroir d’Eau (‘water mirror’) creates magical reflections.

The jewel in the crown of France’s ski resort towns, charming Chamonix is one of the most picturesque towns in the Alps. There’s been a station here since 1901; in our snap, you can see it has its winter coat on, with the roof of its railway station glistening with snow.

A castle spread across a river? In the Indre-et-Loire village of Chenonceaux (yep, the extra ‘x’ is intentional), the Château de Chenonceau was built on the foundations of an old mill and a gallery was built on a bridge across the river, all in the mid-16th century. It was a favourite residence of Catherine de’ Medici.

Cobbled streets? Check. Flower-bedecked cottages? Check. It’s no surprise Gerberoy has been recognised as one of France’s Plus Beaux Villages (‘most beautiful villages’). Dubbed “the village of a thousand rose bushes”, it makes a great day trip from Paris.

The one-time capital of Franche-Comté until King Louis XIV arrived on the scene, Dole is a stunning, if underrated, destination. Pictured is the Collégiale Notre-Dame, where Louis Pasteur was baptised in 1823. Another must-visit is the town’s fine art museum.

Competition time! Enter our annual competition to ‘Name that June’ and you could win a copy of next year’s FRANCE Calendar! Find out how to enter in the 2022 calendar.

Every summer, the banks of the Seine bring a bit of seaside glamour to the City Lights thanks to the Paris Plages initiative. Deckchairs and palm trees line the riverside and there are watersport activities for all ages to enjoy.

Just off France’s Mediterranean coast, this stunning island is crowned by an ancient-looking tower and is said to have inspired The Black Island in Hergé’s The Adventures of Tintin series. The island is privately owned but you can get a great view of it from Cap du Dramont on the mainland.

Wish you were here? The Champagne region is an oenophile’s paradise and there’s no better time to visit than autumn to see the orange and red hues of the vines. The region’s main destinations are Reims and Épernay.

Saint-Cirq-Lapopie surveys the River Lot from its dramatic hilltop perch. Take a stroll along its picturesque streets and you’ll soon find out why it’s a Plus Beau Village de France. It was a favourite with the artistic community including writer André Breton, who lived here in the Fifties.

This Alpine lake is said to be one of the cleanest in Europe, making it the perfect place for a boat trip. Annecy, the so-called Venice of the Alps, is well worth a trip and at the end of this month you can enjoy the popular Christmas market. There are also plenty of antique shops to scour for a bargain.

As the saying goes, Paris is always a good idea – but especially so at Christmas, when the world-famous department store Galeries Lafayette dons its festive finery. Admire the twinkling lights and window displays before heading up to the terraces to enjoy an unbeatable view of the capital.

Enjoy these beautiful images every day with the FRANCE Calendar 2022. Original price £11.99.