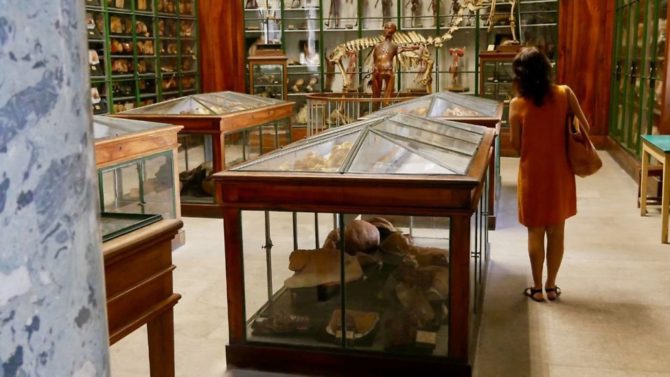 Within Montpellier’s medical school lurks a fascinating collection of curios

Make no mistake, the Musée et Conservatoire d’Anatomie in Montpellier is not the kind of place you’d want to get locked into overnight. But during the daytime, this cabinet of curiosities is fascinating fun.

The museum, at the heart of Montpellier’s historic centre or Écusson as it is known locally, is the pride of the Faculté de Médecine. This is the oldest operational school of medicine in the western world and in 2020 celebrated its 800th anniversary with a wide programme of events. There was even a workshop for children that involved making plague masks for doctors. History, it seems, has a habit of repeating itself.

Appropriately masked myself, I begin my tour wondering what anatomical surprises the museum has in store. But I’m taken aback initially by its extraordinary ambience: marble columns reach up to an ornately decorated ceiling overlooking a long gallery, tall wooden cabinets stuffed with strange objects loom over me from both sides, and a life-sized model of a man with no skin but an impressive musculature, fixes me with its stare.

It’s all very Harry Potter in a creepily magical kind of way. It also calls to mind the eccentric imagination of French director Jean-Pierre Jeunet, who made his name with the dreamlike and dystopian Delicatessen, forever imprinting the image of a man’s head spliced by a meat cleaver on my memory.

As my knowledgeable guide, Xavier, informs me, there are over 5000 exhibits in the museum. The first to catch my eye are several male – how can I put this? – ‘appendages’, looking far from healthy. In fact they’re wax reproductions but I’m struck by how ‘Madame Tussauds level’ skilful they are nonetheless.

Likewise, I’m amazed by the models made of bone-hard papier mâché – a more practical alternative to wax pioneered in the early 19th century by the incredibly inventive doctor, Louis Auzoux. But his real stroke of genius was to make the anatomical parts removable, in addition to individually numbering and realistically colouring them. This ‘anatomie clastique’ (after the Greek klastos meaning ‘break apart’) approach enabled students not only to disassemble and reassemble an entire model, but to build a mental picture of its corresponding structure – a learning strategy that has stood the test of time despite the development of computer-based modelling.

Moving down the room, I come across all manner of curiosities: mummified figures with anguished faces, bone fragments from First World War soldiers held together with metal plates made from an antibacterial alloy, and skeletons of animals used to compare human and non-human anatomy.

All the collections, classed as a Monument Historique in 2004, are meticulously labelled in French and Latin. But the descriptions in combination speak an international language of science and scholarship born of the Enlightenment. This contrasts with the original cabinets of curiosity developed in the 16th and 17th centuries. Many of these celebrated the extraordinary discoveries of the age but were steeped in the magic and mysticism associated with former student of the Faculté de Médecine – none other than Nostradamus.

The museum itself dates back to the mid-19th century, hence the Neoclassical style which is most evident in the upper walls and lower ceiling. Glancing up at this area as I continue my tour, I notice several portraits of imposing figures. As Xavier explains, these are distinguished teacher-benefactors who helped to establish the reputation of the school during the post-revolutionary era when Montpellier became one of three centres of medical excellence in France. One of the luminaries, Jacques-Mathieu Delpech, donated his extensive collection of bone deformities, contributing significantly to the contemporary development of anatomical pathology. Sadly, in a tragic twist of fate worthy of a Gothic novel, he was murdered by one of his patients.

At the far end of the room, beyond skulls mapped out with phrenological markings (a practice now debunked as pseudoscience but hugely popular at the time) and beautiful drawings detailing human organs, I discover the most disturbing of all the exhibits: several double-headed foetuses suspended in formalin-filled jars. I’m half-inclined to observe these from a respectful distance but morbid fascination gets the better of me and I press forward.

Peering at the foetuses close up, I’m reminded more than ever of a chamber of horrors. However, as Xavier solemnly points out, the fundamental purpose of preserving specimens like these was to further the development of medical knowledge for the benefit of all, not to provide cheap, Grand-Guignol-esque thrills.

Reflecting on my visit as I stroll in the botanical gardens (Jardin des Plantes) nearby which are also an integral part of the Faculté de Médecine, I’m mindful of the new perspective I’ve gained on Montpellier: it’s not just a charming and dynamic city, it is rich in medical history. Who knew?

How to visit the Musée et Conservatoire d’Anatomie: Guided tours of the museum in English are available but must be booked through the tourist office as this is the only means of visiting. Unfortunately, the museum is not accessible for those with reduced mobility.

Holiday in France: Explore the Mediterranean resort of Sète

Why we love spending summers at our home in Occitanie