The 10 most popular gardens in France 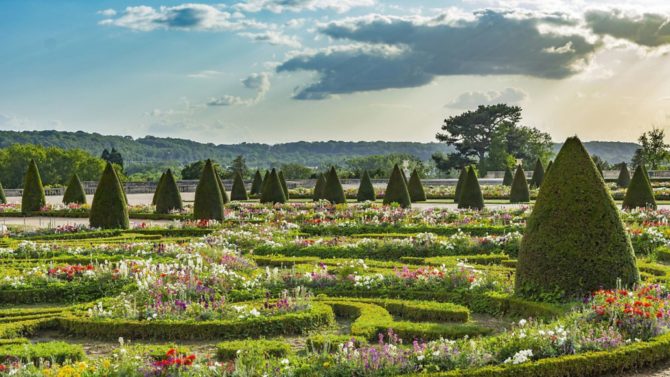 Each of the 100 gardens assessed was given a score out of 100 to create an overall ranking, with Paris topping the leaderboard

French landscape architect and royal gardener André Le Nôtre was entrusted with the creation of the gardens of Versailles. Trees were brought in from regions across France and thousands of men were involved in the huge project. It was a monumental task and the work took 40 years to complete.

Situated on the border between Saint-Germain-des-Prés and the Latin Quarter, the Jardin de Luxembourg was inspired by the Bobboli Gardens in Florence and was designed by Marie de’ Medici in 1612. Currently owned by the French Senate it covers 25 hectares of land.

Separating the Louvre from the Place de la Concorde, the Jardin des Tuileries was commissioned by Catherine de’ Medici for the Tuileries Palace. The garden takes its name from the tile-making factories (tuileries) that once stood on the site, and is a popular green oasis in the heart of the city.

Fashion designer Christian Dior was born in Granville and his former home is now a museum dedicated to his life’s work. The remarkable clifftop garden was created by Dior and his mother Madeleine and was a major source of inspiration for the famous French couturier.

Monet lived at his house in Giverny for over 40 years and the flower and water gardens he created reflected his passion for horticulture and colour. The artist painted 250 canvases of his iconic water lilies and is said to have removed each dead leaf to ensure the perfect beauty of the pond.

Located on the northern tip of the Île d’Oléron off the coast of Charente-Maritime, the 46-metre-high lighthouse with its eye-catching black and white stripes offers panoramic views from the top (worth the 224-step climb), from where you can enjoy a bird’s-eye view of the garden, designed to resemble the shape of a wind rose, that surrounds the base.

Established as a botanical garden in the 17th century, the Jardin des Plantes covers 28,000 hectares and is home to the headquarters of the National Museum of Natural History, as well as four ‘galeries’ and a zoo. Don’t miss the romantic rose garden and the Alpine garden, which boasts over 2,000 species of mountain plants and one of the Jardin des Plantes’ oldest trees.

In 1905, Madame Thebault, a famous actress and friend of Claude Monet, built a house in Étretat and started a small garden. Today that garden extends over the cliffs made famous by Impressionist painters and boasts a striking collection of sculptures and artwork that blend into the carefully created shrubbery.

Perched on a rocky spur overlooking the Dordogne Valley and its many châteaux, the Jardins de Marqueyssac include over 6km of pathways surrounded by more than 150,000 hand-pruned boxwoods. Designed by a student of André Le Nôtre, the gardens belong to the Château de Marqueyssac and are listed among France’s Jardins Remarquables.

One of the Loire Valley’s most spectacular formal gardens can be found at the Château de Villandry, where the nine hectares of grounds are divided into six distinct gardens themed around water, vegetables, herbs, and flowers, all framed by a series of terraces. There’s also plenty of family fun to be had in the children’s maze and play area.

Visit Dordogne in France for a food holiday

Enjoy a rural retreat just an hour from Paris

You can now stay at the Château de Versailles