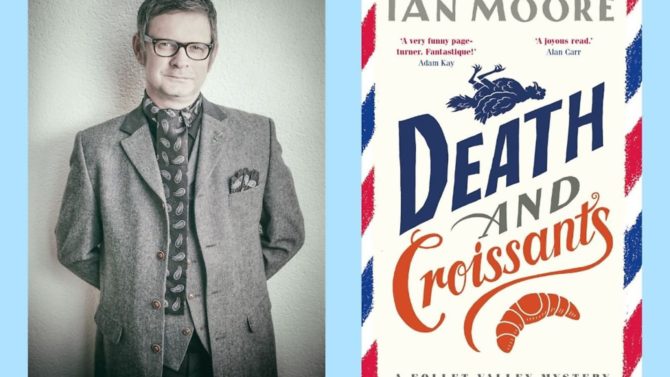 Ian Moore is describing the view from his Loire Valley guesthouse. “There are three goats who all hate each other – and me – so there’s a sort of stand-off going on. The horse is waiting by the stable for her hay – oh, there goes my idiot dog. I absolutely adore him, but he’s just nuts. And the hens are waiting for their food. We used to name them after female songs by The Kinks, like Lola and Victoria, but it seemed like the kiss of death. We try not to name them now, because we just think it’s unfair!”

It’s a hilarious insight into the ‘good life’ that inspired Moore’s new novel – also set in a French bed-and-breakfast run by a droll Englishman with some cameo appearances from his chickens. Death and Croissants is his first foray into crime writing, following a series of non-fiction books charting the humorous ups and downs of family life in rural France.

“When I wrote the non-fiction books, I’d gone as far as I wanted to go,” he explains. “I’d got to the point where I was looking for stories, so it had run its course, but I still wanted to do something where you could talk about the differences between the French and the English in a funny way. Rather than just doing a soap opera thing, I wanted to do a genre novel, like crime. I love watching and reading crime, so it seemed like a more natural way to go. You can bring in more comic elements without making it so absurd.”

Death and Croissants fits neatly into the cosy crime genre, recently popularised by the likes of Richard Osman’s The Thursday Murder Club. But what sets the former apart is the dry wit laced throughout, making the reader giggle far more than seems reasonable for the genre. It’s no surprise given Moore’s other career as a jet-setting stand-up comedian.

“It was all over the world almost every week. When we first moved out to France, I’d be away Thursday to Sunday every week. That would be mainly the UK, then it grew into more international – the Middle East, China, Hong Kong. I had to try and cut that down, so I concentrated on the more lucrative gigs than gigging all the time. You get the idea in your head where you have to gig all the time to stay match fit and it turns out that’s not actually the case!”

Moore’s life in France has provided him with plenty of creative inspiration and he has even tried his hand at performing in both France and in French. “It’s so difficult – because I’m not fluent, my thought process isn’t in French and my speed of response and thought isn’t quick enough, in my opinion, to be as good as I am in English as in French,” he admits. “I’m playing almost a different character [in French].

“The first French language gig I did was in the Comedy Store in London. It was a packed house and I was on first with no compère – they just sent me out. As I walked out onto the stage, all the French comedians in the dressing room just shouted ‘Merde!’. I didn’t realise that was the French for break a leg, so I was thinking, ‘So rude!’

“But then this French act came on after me and she said to the audience, how on earth did you understand what he said, his accent was awful? I know my accent’s awful; I sound like a dubbed Michael Caine, but the audience booed her because they had taken me to their hearts. They thought I was playing a character where I was so bumblingly awful with this accent. But it works! It’s not something I can do all the time; it’s too stressful, too hard. I can just roll up onto the stage in English, but in French the preparation is so exhausting and so pre-planned that it takes out the inventiveness of what you can do.”

And there are, of course, the differences in humour between the cross-Channel neighbours that Moore has grown to know. “Certainly pre-Brexit, the English had very strong reputation for being able to laugh at themselves. The French find it very difficult to laugh at themselves. They don’t understand it. It’s that old saw about how do you get a Frenchman to defend France? You insult France. So they’re allowed to insult France but nobody else is. When I’m onstage and performing in English, I’m generally mocking English society and English things that we find funny because it’s us, and in French I’m doing the same about the English.”

Going from performing to braying audiences most nights to writing, one of the most lonely of creative careers, may seem like a big change, but Moore has relished the transition. “Whether you’re a stand-up or a writer, it tends to be a very solitary experience – especially when it’s not going well. But the idea with Death and Croissants is that I wrote a book I’d like to read. I work early in a morning and it felt like I was going to have breakfast with these characters. It sounds ridiculously self-indulgent and a bit pompous but you’re getting up in the morning and wondering where that character’s going today. I’m now halfway through writing book three and a lot of those characters reoccur so you’re developing them. It feels almost like a little family.”

Opening his guesthouse, La Pause, at his family home has also been quite the pivot from the stage, but it’s another overflowing source of creative inspiration for both writing and comedy. Surprisingly, hosting didn’t come naturally, Moore says. “[The guesthouse] was kind of forced upon me! I had to find something that established me in France in the tax system to build a safety net over here. People who know me well would not describe me as a natural host. As a stand-up comedian I’m very dry and I don’t pull punches; I’m quite honest. It was never an obvious choice for me to be a host, but in a kind of Basil Fawlty way I’ve got away with it. In the end, it’s actually worked out because I do actually quite enjoy it. I didn’t think I would but I don’t mind it. It has given me the opportunity not to be away from home so much and I’ve written a lot more because I’m up earlier in a morning.”

It bodes well for more capers in the Follet Valley series!