The French villages you should visit this year 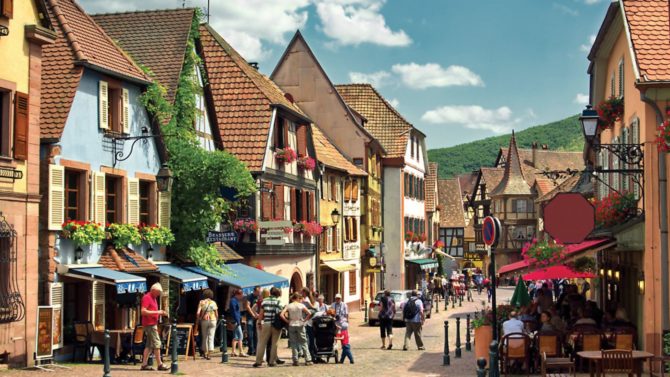 We would find it tough to choose just one French village as our favourite but the French public have managed! The winner of the title of ‘France’s favourite village’ this year isn’t necessarily the one you would expect but it is definitely worth a visit

We’d struggle to pick just one French village as our favourite when there are so many lovely ones to choose from, but it does help to have a list of options. Every year since 2012, viewers of the television programme Le village préféré des Français are asked to choose their favourite from a shortlist of villages (one from each region), based on which one best represents the “the charm, authenticity and beauty of the built environment”. The votes have been counted and these are France’s favourites for 2017 and all of them should be on your ‘must-visit list’ this year. Do you agree? Discover all 13 villages on this year’s shortlist and vote for your favourite in our poll

With its pretty pastel-coloured houses and quaint cobbled streets, it’s easy to see why the chocolate-box village of Kaysersberg was crowned as this year’s village préféré des Français. The Alsace Wine Route passes through the village, so why not stop off and raise a toast to its success. It’s a must for the Christmas markets too.

Take a stroll around the medieval ramparts and through the narrow lanes lined with brightly painted fishermen’s cottages, and you’ll see why the pretty coastal village of Saint-Valéry-sur-Somme secured second place. The views across the Baie de Somme are pretty spectacular too.

You’d be forgiven for thinking that time has stood still in the traditional village of La Roque-Gageac, nestled on the edge of the Dordogne river and backed by steep cliffs. Voted into third place by the viewers, picture-perfect La Roque-Gageac is also one of Dordogne’s plus beaux villages.

And here’s a reminder of the previous winners…

Brittany stole the show for the second year in a row when picturesque Rochefort-en-Terre was chosen as France’s favourite village in 2016. It also belongs to the Plus Beaux Villages association and is a designated Petite Cité de Caractère.

7 things to consider before buying in a French village

Brittany secured its first victory in 2015 when the port of Ploumanac’h won the title of France’s favourite village. Located on the famous Pink Granite Coast, Ploumanac’h is one of the best places to see the unusual, rose-pink rock formations.

Perched high on a hilltop where it seemingly floats in the sky, the fairy-tale village of Cordes-sur-Ciel worked its magic on the viewers to win in 2014. It was already recognised as a plus beau village and one of the Grands Sites de Midi-Pyrénées.

18 pretty villages in Midi-Pyrénées you need to visit

Kayersberg isn’t the first chocolate-box Alsace village to win the title of village préféré des Français. With a reputation for its award-winning floral displays, the colourful village of Éguisheim took the title in 2013.

Offering a bird’s-eye view over the River Lot below, the charming village of Saint Cirq-Lapopie is considered to be a masterpiece of medieval architecture. A favourite among artists and writers, it also won the hearts of the French viewing public in 2012.

Previous Article Summer in the French Alps: A-Z activity guide
Next Article 11 celebrities who own a property in France