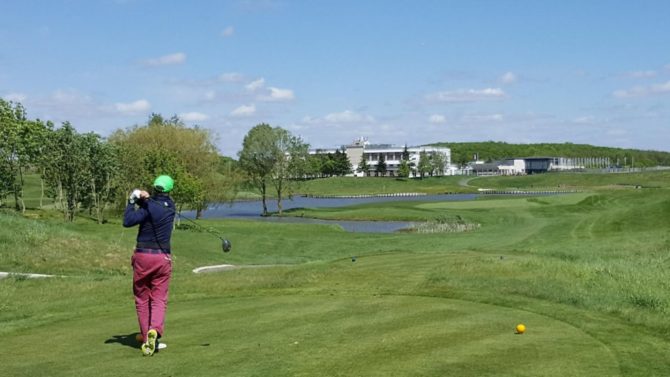 As the Ryder Cup fast approaches, we test out the championship course at Golf National near Paris, where top golfers from Europe and the USA will battle it out.

Albatros is Golf National’s championship course, built for that purpose by the transatlantic team of Robert von Hagge and Hubert Chesneau. Fittingly enough, it requires long flights over water, notably the white-knuckle closing stretch, where short grass threads a green ribbon between lakes and banks of heavy rough designed to support spectators and swallow golf balls.

It hosted the French Open at the end of June, as it has every year but two since it opened in 1991. From 28-30 September, it will be the stage for the Ryder Cup, when the flower of American and European golf go head-to-head. In 2024 it will host Olympic and perhaps even Paralympic golf when the torch comes to Paris. Aigle, a less exacting 18-hole course, and Oiselet (nine holes for beginners and lessons) are the terms no French golfer ever uses for an eagle and a birdie.

At only the second Ryder Cup to be played on mainland Europe, will the event have a French flavour? I asked Golf National’s Yorkshire-born general manager, Paul Armitage, for his thoughts. “I can promise a spectacular and distinctively French opening ceremony,” he replied; probably in the Galerie des Batailles at the Palace of Versailles, beneath paintings of glorious French victories.

“After that…” Armitage gave a trademark Gallic shrug. After that, Ryder Cup golf will be played in the normal way, which is to say in a fiercely competitive spirit, with needle on the green and noise from the gallery. Half the tickets have gone to French nationals, so we can hope for more ‘Allez!’ and ‘Bravo!’ than usual, to go with the familiar ugly chorus of ‘In the hole!’ and ‘Great ball!’

On a sunny spring afternoon, Golf National’s second-string course was as full as a golf course can be, with three- and four-ball games stacked up at 200-yard intervals like planes coming in to land at Heathrow. Or, more to the point, like holiday golfers in the Algarve or on the Costa del Sol; but not, usually, in France, where a ratio of 700 golfers per course – compared with 1,500 in Britain and 4,000 in Japan – usually offers the happy prospect of an uncrowded game.

I was teeing it up on Albatros with two keen French golfers, Antoine and Charles. “We usually play Aigle,” Antoine explained, “but wanted one last game on Albatros before the Ryder Cup. It’s much tougher, you will see.”

I soon got the measure of my companions. Antoine is one of those players you hate to come up against: not long but straight, with a good short game and a steady hand on the putter. Charles was more fun to watch. A tall and rangy golfer, he took the club slowly back in a wide arc before unleashing a mighty swipe that sent the ball a prodigious distance, high enough to threaten the light aircraft buzzing in and out of Toussus-le-Noble aerodrome, but not always in the right direction. It was a breezy morning that often called for a low ball flight, which was not in Charles’s repertoire. His putting stroke looked a bit iffy, too.

It was obvious that if I had any money to place on the outcome, I would back Monsieur Steady. But golf has a wonderful way of confounding expectation. As the round progressed, an occasional false shot crept into Antoine’s game, while Charles pulled off improbable recoveries from the top of distant hills and deep in the muddy hazard.

After a decent drive, Antoine and I would struggle to find balls that had strayed a few centimetres from the fairway. And if we did find them, hacking out sideways was all we could manage, so dense and clingy is the thatch of Albatros rough.

Although Antoine led from the start, courtesy of a 12ft par save that shook Charles into missing from half that distance, he never quite managed to put the match to bed.

There are no dull holes on this course, but 15 is the beginning of its grandstand finish: a long par 4 requiring two big, brave and accurate hits to a semi-island green. Both men made bogey in their separate ways: Antoine, by playing three iron shots to the green; Charles, after smashing his drive into the lake.

The 16th is another lake hole, this one a long par 3 with, on the day, a horrid pin position that stretched the concept of fair play. Unable to putt towards the hole from the back of the green, both men chipped over the bunker and somehow made par.

In the context of what comes before and after, 17 is a forgettable hole and I forget what happened there. But Antoine knew the score. “One up, je crois?” he declared on the 18th tee.

We must hope that most Ryder Cup matches go the distance, because this is a terrific finishing hole, echoing the 16th only with water on the left, which is less unnerving for the right-hander who tends to slice under pressure. It’s a par 5, which seems more encouraging than a long par 4 – but par is irrelevant in matchplay.

After his best drive of the day, Charles was perfectly placed to attack the green, but still had 200 yards of water to carry. Antoine knocked his ball pleasantly down the middle, as usual, and played up to within pitching distance of the flag. He had a strip of water between ball and green to clear, but the odds were on a routine par.

Needing a four for a chance to square the match, Charles rolled up his sleeves and gave it everything. His ball cleared the water with something to spare but caught the wind and landed 50 yards wide of the green, narrowly missing a schoolchildren’s picnic on a bank which will be crammed with spectators come September.

With the flag placed teasingly close to the water – you get used to this on Albatros – Antoine played his ball beyond the hole. It rolled up to the back of the green, safe but 50 feet from closure.

The schoolchildren looked on with interest as Charles prepared to play his third from an awkward sloping lie, as did Antoine and I from our position hole-side. Not the easiest of shots, we agreed: Charles had a bunker and a grassy bank to clear, and only half a dozen paces between the flag and the water’s edge if he overcooked it.

“C’est bon!” said Antoine, as his opponent’s ball landed on the brow of the bunker and hopped over the bank; then, “C’est trop bon!” as it curled towards the flag; and finally “Pas possible – Eagle!” as it rattled the stick and dropped into the cup.

The children leaped to their feet screaming, applauding and demanding selfies – a Ryder Cup crowd in microcosm. On the green, the two friends embraced. The gods of golf do smile occasionally.

“Now I suppose you’ll be jumping in the lake,” I suggested to Charles – as winning Ryder Cup captains do, if they aren’t thrown in by their team.

“I don’t think so,” he replied. “Thomas Levet tried that after winning the French Open in 2011, and broke his leg.” The lake is about 18 inches deep. So I have my Golf National story to tell and retell in the pub and the golf club in September, even if it wasn’t an albatross and it wasn’t my eagle. Meantime, if Ryder Cup captains Jim Furyk or Thomas Bjørn want the benefit of my experience, my advice would be to stay out of the water.

Liked this? You might also enjoy: Where to buy in France for guaranteed sunshine