Take a stroll in Troyes 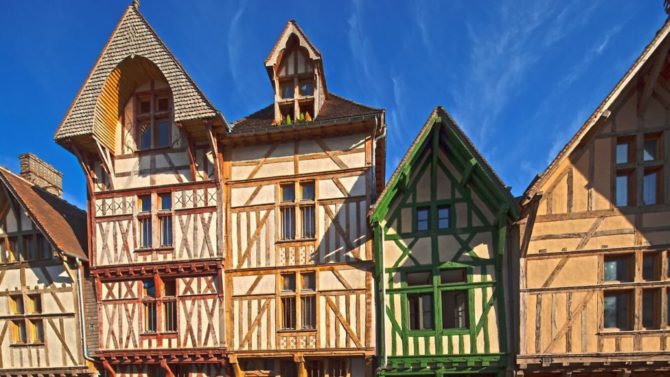 Explore this magnificent Ville d’Art et d’Histoire, home to not one but ten listed churches

Troyes gets a lower billing in the Champagne region these days, with Reims and Épernay better-known as homes to the globally-renowned champagne houses. But it was Troyes that dominated the region during the Middle Ages, as wealthy local landowners, the Counts of Champagne, put the city on the map as a centre of commerce. The medieval fairs from the 11-13th century brought Troyes wealth and status as a crossroads for trade. The champagne trade wouldn’t take off until after the 17th century and textiles would become the main industry by the 1800s.

Troyes is now the somewhat sleepy cousin to Reims and Épernay, but it still makes for an attractive base to explore the Aube region, with its historic buildings and a handful of sights within gentle strolling distance. The main attractions run from the medieval centre, located around the Hôtel de Ville, towards the oldest part of the city, first founded as a Roman settlement in the first century, but today dominated by the Cathédral Saint-Pierre-et-Saint-Paul. It’s a walking trail steeped in history and bittersweet sense of faded glory.

The devastating fire of 1524 was the turning point in the history of Troyes. It savaged the medieval centre, leading to the reconstruction of the buildings in the trademark mix of Gothic and Renaissance styles that prevail today. The twin-level Maison du Boulanger on the corner of Rue Champeaux is typical with the bakery downstairs and the family quarters on the upper level. Nearby is the Ruelle des Chats, the narrowest alleyway in the city, leading from the main street to a series of hidden courtyards with ancient fountains. The passageway may now be home to some of the most popular places to eat and drink in Troyes but the ancient gulley, where people would have thrown their waste from upper windows, glistens with a watery trickle over the cobblestones.

The legacy of the wealth of the medieval period is a series of churches around the city, of which the Église Sainte-Madeleine is one of the most spectacular. The elaborate stained glass window tells the story of Christ and highlights the artisan craftsmanship that Troyes was once famous for. The nearby Musée de l’Outil et de la Pensée Ouvriere celebrates these much-forgotten crafts with a vast collection of handmade tools displayed over two floors. But, while the traditional guilds have faded, new artisans are also finding a home in the city with Maison Caffet, the shop showcasing the creations of the chocolatier Pascal Caffet, located just round the corner on Rue des Quinze Vingts.

Stop for a coffee on Place Vernier, overlooking the 16th-century Gothic facade of the Basilique Saint-Urbain with its protruding gargoyles, before heading across the canal to the oldest district, where the cathedral looms majestically over the Place St-Pierre. Inside there is a small exhibition of treasures from its collection, including some of the elaborately embroidered purses used by the Counts of Champagne to keep their wealth. The Musée Saint-Loup and the Musée d’Art Moderne both flank the cathedral, although the latter is closed for refurbishment until 2021. Some of the collection is on temporary display, alongside works of fine art, archeology and natural history, at Musée Saint-Loup, including paintings by the artist André Derain, as well as works by his contemporary, Matisse.

It’s the Saint-Nizier quartier just beyond the cathedral, however, that best captures the atmosphere of Troyes. The labyrinth of half-timbered houses, hidden passageways and lost-in-time courtyards around Saint-Nizier Church includes some of the oldest buildings in the city, some even dating back to the 15th century. It’s a tranquil spot to sit and contemplate Troyes’ somewhat overlooked place in history, ideally with a glass of local fizz to hand.

Plan your visit to Troyes at tourisme-troyes.com

Take a stroll in Lavardin