Climbing in France led to greatest adventure yet 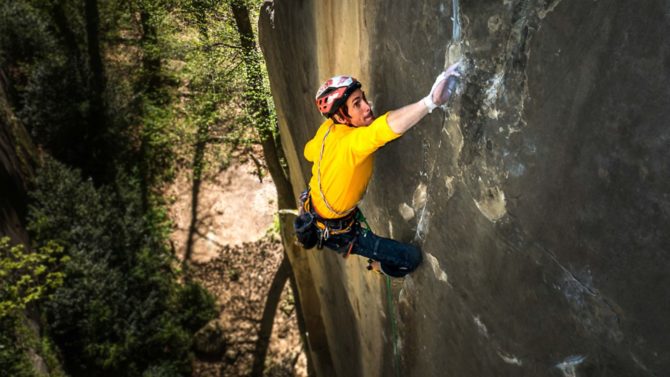 Professional climber James Pearson never thought he would stay in one place, constantly travelling the world in search of new challenges, before finding happiness at home in Gard

When your occupation involves scaling some of the world’s most challenging mountain faces and enjoying the nomadic lifestyle which goes with it, choosing where to start a new life isn’t always easy.

Climber James Pearson grew up in Derbyshire and has visited stunning locations across the globe, from Thailand and Australia to Japan, but it is southern France where he has finally decided to put down roots.

James lives in the village of Connaux, near Avignon, with his French wife and fellow climber, Caroline Ciavaldini. The couple met in Turkey when James was climbing with a friend. “We hit it off right from the start,” he says.

Caroline grew up in Réunion and discovered climbing at the age of 12, excelling at indoor climbing and regularly competing in the Lead World Cup Circuit. James, on the other hand, had honed his skills tackling challenging climbs in the Peak District, exposed to all the elements.

“Climbing was something that always seemed to come naturally to me,” he explains. “At 15, I made new friends at secondary school and it just so happened their father was a climber.

“I spent my life basically catching the bus around the Peak District, dragging my bouldering pad and meeting up with people to go climbing.”

After sixth form, with a provisional place at university, James began a gap year going to America for three months with friends.

“That was the start of my discovery that the world is enormous, but tiny at the same time. There is so much out there to discover.”

James’s ambitious climbing feats were attracting attention and he soon secured his first major sponsor, outdoor clothing company The North Face. His year off soon became two, then three and as he attempted harder things, the sponsorship contracts increased along with offers of climbing videos.

While still in his early 20s James went to Europe with friends for a couple of months in a campervan and was blown away by the positivity of other climbing communities.

“I decided to move away to become a better, stronger, fitter climber,” James says about his decision to leave the UK for Austria.

“At that time I was taking calculated risks and doing dangerous things where, if I’d fallen off – I don’t want to be drastic – but it might have been the end of me,” he admits.

“I was taking more and more of these risks, the only style of climbing I could do that was good enough to get media coverage, but at some point I realised this was a really scary path to be walking down, having to push yourself ever more in that one direction of risk-taking.

“At some point, everything is going to go wrong.”

As fate would have it, it was exactly at this moment when James was evaluating everything in his life, that he crossed paths with his future wife, Caroline, who is also a full-time professional climber, then supported by the French Federation of Mountaineering and Climbing.

“We realised we were spending less and less time in our actual apartments. After a year of that lifestyle of perpetually travelling and living out of a suitcase, we decided to buy a campervan and went on the road for another year.

“France was still our base, because Caroline’s family was here, so we’d be back in France every few months and the UK.”

The couple got married in 2013 in Greece and shortly afterwards stumbled across their future French home almost by chance.

“We weren’t planning to settle down,” says James, 33. “But I found this lovely little climbing spot and enjoyed walking in the evening with the sunset to a picturesque French village.

“I remember saying to Caroline ‘wouldn’t it be amazing if one day we could live somewhere like this?’.”

One night they stopped off to look inside the window of an agence immobilière and were amazed at the prices of the properties.

“I was used to the house prices in Innsbruck and had a flat in Manchester before that,” James says. “Caroline had been in Aix-en-Provence which is crazy expensive and Montpellier is not that much cheaper.

“We were at this little place in the dark and the prices seemed really cheap and accessible and instead of being able to afford a 30 or 40m² shoebox, with the same money we could buy a giant house in the countryside.”

Within two weeks the couple had bought their first house together in the quiet village of Connaux for a great price as the owner was looking for a quick sale.

“From the advert it seemed too good to be true,” James says. “It was about twice as big as any of the others we had been looking at, all the photos looked really nice, there was visible stonework throughout the house, big beams across the ceiling and a beautiful staircase.”

While it didn’t have a garden, as the couple spend so much time outside climbing, this wasn’t an issue. They were more worried about finding a room which was big and high enough inside to build a climbing room.

“If we were going to settle down, we needed a space to build a climbing room that was big enough for us to properly train on because we need to train every day,” James explains.

Their attic has a roof height of 5m in the centre, twice as high as the other floors, which was when James realised the property was ‘the one’.

“I guess we fell on it at the right time, we weren’t scared by the amount of work and could see the potential,” James says. “It’s just amazing. We live in this little village, with maybe 1,500 people, but it has everything from a butchers and greengrocers to a hairdressers.

“It’s what I always imagined living in a little, tiny village, a perfect village, would be like and we found it.”

Over the past five years, in between travelling, the couple have been doing the house up. While most of the major work has been done, it is still a work-in-progress.

“When we bought it there was really a lot of work to do so we’ve been doing some extreme, advanced DIY,” James laughs.

“We took half the roof off to make a roof terrace. We’ve dug up the whole ground floor to relay that with underfloor heating and proper insulation.

“We’re trying to do as much of the construction as we can in an eco-friendly way.”

At the same time they were also considering parenthood and knew doing major work on the house wouldn’t be as easy with a baby around, which spurred them on to get it finished as quickly as they could. It was just as well, as baby Arthur arrived in December last year.

“It’s pretty much done, we get to enjoy it and make the most of it, and spend all our time looking after Arthur and enjoying watching him grow up,” James smiles.

“One of the things we were hoping for while Caroline was pregnant, was that we’d have an adventurous baby who would be happy to be outside in allsorts of places and allsorts of weathers and we definitely got that,” James laughs.

“What we didn’t think about is that an adventurous baby needs action all the time.”

While they are enjoying going out for family walks, climbing can be a bit more complicated if they don’t have a babysitter.

“We’ve taken a little bit of a step back from pushing ourselves in climbing,” James says. “It’s been a pretty chilled few months, a lot less active than we’re used to, but at the same time we’re enjoying the simple pleasures of having a new baby and figuring it all out.”

James’s mum and younger sister have been out to visit several times from England along with Arthur’s great-grandparents, who are in their 80s. James’s mum, who is nearly 60, has even recently started climbing herself. When the couple go away in the future, she will join them to look after Arthur, so they can make it a serious climbing trip. Their first break away together was to Corsica in May.

“Now when I take risks, they are more manageable risks,” James says. “There are lots of climbs out there I could potentially do, but I won’t do because I think they’re just too risky and dangerous.

“This was a decision I made before Arthur was even an idea.

“I’m still going to be out there doing risky climbs, but it depends how you define risk. There are risks in everyday life – I honestly believe that driving our car is probably one of the riskiest things we do.”

As Arthur grows up, James and Caroline intend to continue pursuing their rewarding careers in climbing and travel the world as much as they can.

“We can’t take Arthur with us everywhere, even though we’d like to,” says James. “But there are plenty of places he can come and I’m sure we’re going to have an adventurous life together as a couple and as a family and give Arthur the gift of a love of the outdoors, nature and travelling.

“For me, climbing has become the excuse to experience all those things. I love the physical act of it, but it’s much more than that, it’s the places, the countries, the people that you meet through it and the experiences that make climbing really special for me.

“I hope, whether through climbing or any other sport or activity, Arthur is going to enjoy those same passions and have a long life full of amazing experiences too.”

Climbing Beyond: The World’s Greatest Rock Climbing Adventures is published in hardback by Aurum Press, priced £25.

1. La Capelle-et-Masmolène in Gard – it might be small, but the bouldering spot of La Capelle is perfectly formed. Great rock in a magical forest, it’s the reason we moved to Connaux in the first place.

2. Annot in Alpes-de-Haute-Provence – one of the best places for crack climbing in Europe, and home to one of the hardest routes I ever climbed, Le Voyage.

3. Bavella – a stunning mountain range in Corsica of perfect granite walls and spires. More rock than you could ever hope to climb!

4. Fontainebleau in Seine-et-Marne – the home of bouldering, with some of the most perfect rock on the planet. If only the weather was a little more reliable.

5. St-Léger-du-Ventoux in Vaucluse – great sport climbing with tons of potential for more hidden away in the many little valleys and rivers close by.

Why Montpellier in France is a wonderful place to live