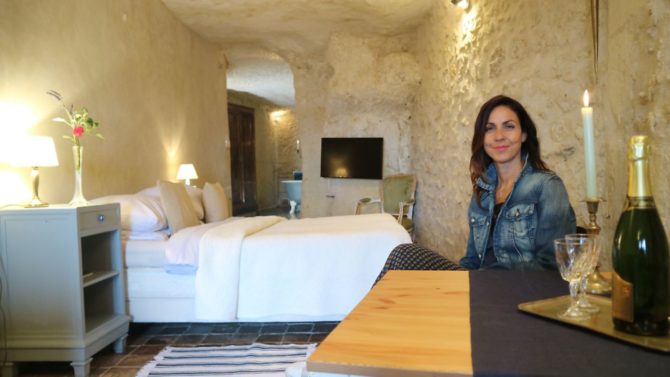 Everyone dreams of owning their own holiday home one day, where they can roll up when they please and bask in better weather, breathtaking views and a perfectly-crafted space to get away from it all.

But can you really achieve all this in Europe on a budget of £10,000? In a new series for ITV, presenter Julia Bradbury follows those who are building their own holiday homes and accommodation for others on this modest budget.

On her travels Julia came across French couple Alexis Lamoureux and Lotte Van Riel who run Amboise Troglodyte in the heart of the Loire Valley. Troglodyte caves carved into the cliffs are a common feature in France, but this one has had a particularly spectacular makeover.

The young couple bought three caves in Nazelles, near Amboise, for €1 on the proviso that essential structural work to reinforce the roof was done within six months. They sold their only asset, a 1972 Citroën for £10,000 to finance the project.

The roof reinforcement cost the equivalent of £8,500 per cave so Alexis and Lotte renovated the first cave to rent out as a holiday home, available on Airbnb, and used the proceeds to renovate the further two caves.

On the show Alexis admits: “Holding a drill and a screwdriver was like science fiction for me.”

Amboise Troglodyte bed and breakfast now boasts three rooms, including a double room deluxe, studio and villa, which have been elegantly decorated to recreate the charm of a French home with a mix of second-hand finds and high street bargains.

Alexis and Lotte were particularly thrifty in certain areas as Julia discovered – one of the roll-top cast iron baths had a former life as a trough in a field which they managed to negotiate from the farmer for nothing. To save money, the couple also did most of the tricky parts of the project themselves, including plastering and tiling.

Lotte, a graphic designer, said: “We didn’t have much choice in the end, so it forces you to do stuff you’re normally not comfortable with or you are scared to do.

“We had to fit it in because that was the money we had to renovate and nowadays you can find tutorials on the internet and you can get inspiration very easily.”

11 secluded retreats in France you will love