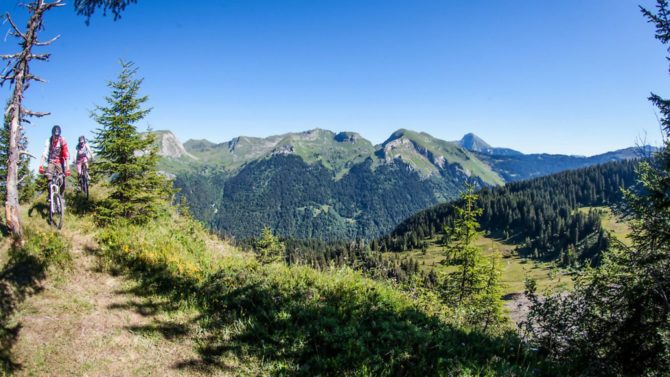 Nestled in the heart of Portes du Soleil, one of the most important ski destinations in the world, is Morzine, an authentically preserved resort town in Haute-Savoie which is just as attractive in summer as it is in winter. Morzine’s charm and friendly, laid-back atmosphere did not go unnoticed by Sam Thomas and Jon Dredge when they first visited in 2006. After a snowboarding sabbatical, the young couple decided to wave their hectic corporate careers goodbye in pursuit of a new business venture: starting a ski and snowboard chalet company in their newly discovered Alpine paradise.

Not only had the couple stayed in many different types of accommodation during their career break, but they had also amassed a considerable amount of experience in property development alongside their jobs in recruitment. This, together with a genuine love for the slopes and a keen eye for interior design is what led them to create More Mountain, a company that would see their vision of the ultimate ski and snowboard holiday brought to fruition. The goal was to offer luxury and style, without the pretentiousness and at an affordable price.

What attracted Sam and Jon to Morzine in the first place is that it is so much more than the average ski resort destination which typically turns into a ghost town once the season is over. Even in summer, there’s plenty to do and experience, from sitting by the lake and sunbathing to hiking or mountain biking.

Different ways to make money from you French property

Getting married in Morzine in 2009 was quite an amazing experience for Sam and Jon. After a short ceremony at the mairie, a procession of 30 beeping cars full of friends and family who had flown in from the UK, led the newlyweds up to the mountain restaurant where they had their reception. “We had a huge spread and a Savoyard wedding in the sense that we served raclette (a regional specialty consisting of melted cheese scraped onto potatoes, cold meats and pickles) and traditional mountain fare. It was very relaxing and easy-going.”

Sam and Jon’s own chalet, which they designed and built themselves, is located in the centre of Morzine, just down the road from their office. After dropping their five-year-old son Ted at school, the couple have their first business meeting of the day while enjoying some fresh mountain air and walking Figsy, the fox terrier. “We’re certainly not stuck behind a desk like we were when we were back in the UK. No two days are the same. What does stay the same is that we’re in the mountains. The view from the window is always fantastic. It’s a great place to work and a wonderful town to live in.”

At the weekends the family always prioritise quality time out on the slopes. “Our son goes to ski school on Saturday mornings giving Jon and I a two-hour slot to go snowboarding,” says Sam. They hit the slopes again after lunch, this time as a family. “Ted can ski like an absolute ninja!” she adds.

Why France is a good place for families

Though Morzine’s large expat community means that English is quite common, Sam and Jon always make an effort to speak French. “We really pushed ourselves into social situations in which we had to speak the language and also took French lessons. Especially since having a child, our level of communication has increased massively,” Sam explains. Though at first it was difficult to raise a child with two languages, their son is now completely fluent in French.

5 reasons why we love living in Morzine

? Leading an outdoor life in the mountains and breathing in the clean, fresh air

? Being part of an entrepreneurial community where everyone is here for the same reasons

? You’re always at one with nature and surrounded by beauty. The seasons are very obvious here in the mountains

? Meeting different people every day and the fact that no two days are exactly the same

? The view from our window every morning. It’s inspiring