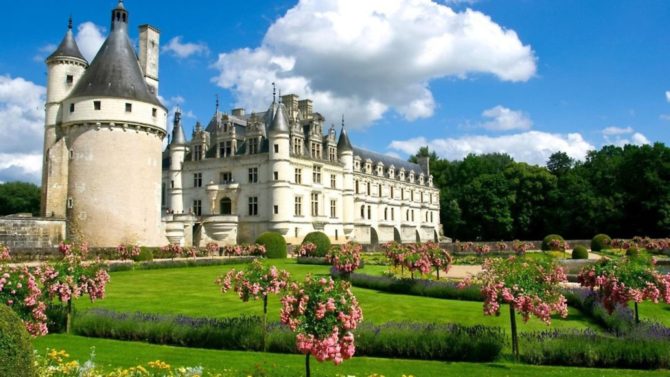 Take a trip along the Cher river and into the Sologne region, discovering châteaux of all shapes and sizes

My journey along the Cher river and into the Sologne region begins in Tours. Starting off in style with an overnight stay at Château Belmont (rooms from €175), a stroll around the city was a must before hitting the road. One of my favourite sites is the Musée du compagnonnage where you can admire the skilled craftsmanship of artisans of all different disciplines from chocolate-making to carpentry.

The cathedral and the half-timbered houses of the old town will take you right back to the time of Balzac and a visit to Les Halles will set you up with all you need for a picnic lunch – goat’s cheese and rillons are obligatory.

Leaving the city, the River Cher is somewhat elusive and it is difficult to find small roads that follow its course, so I gave in to my sat nav and took the fast D976 to Bléré where I had my first real glimpse of this peaceful river.

Unlike the Loire which has dangerous currents, this stretch of the Cher is ideal for swimming and canoeing. You can cross the river here and join the D40 towards the village of Chenonceaux and its famous château (spelt without the letter x). Of all the Loire châteaux this has to be one of the most beautiful with its arches across the water and its rose garden. To see it at its best try to go slightly out of season or early in the day to avoid the crowds.

Continue on the D176 to Montrichard where you can visit the ruins of the medieval fortress which towers above the town and the Église Sainte-Croix which was once the castle’s chapel.

It is perhaps now time for a late lunch by the side of the river. And continuing with a gastronomic theme, a visit to the Monmousseau wine cellars (specialist in sparkling wines) and the mushroom cave in Bourré, a little further along the D176. Both benefit from the coolness of the troglodyte cellars carved out of the limestone rock, a feature of this valley. Now take the next little bridge which crosses back over the Cher and head back to Saint-Julien-de-Chédon to a delightful B&B, La Folie Saint Julien (rooms from €105 including breakfast with home-made jams and pastries).

Staying on the south side of the river, the D17 will take you through a succession of wine-growing villages as far as Saint-Aignan. Stop for a coffee down by the river for a view of the bridge and the town silhouetted above, before heading on to Selles-sur-Cher. The château here has suffered many ups and downs throughout history and was rescued from abandonment in 2002 by Michel Guyot (the man behind the Guédelon project to build a medieval castle from scratch in Burgundy). In 2012 it was sold to a couple who have placed the emphasis on its winery, offering tastings and tours. A medieval fête, concerts and a whole programme of events has brought the castle back to life.

After visiting the château, it is time for a spot of lunch at the Lion d’Or opposite the church (liondor41.com, menus from €16).

Now take the D35 to Saint-Loup-sur-Cher, crossing back over the river to the medieval village of Mennetou-sur-Cher. With three arched gateways, three defensive towers, cobbled streets and half-timbered houses, it has bucketloads of atmosphere. Now you are on the edge of La Sologne, but to do it justice, it is best to save that until tomorrow, so re-join the D51/D90 and head for an overnight stop at La Junchère B&B at Saint-Hilaire-de-Court, just outside Vierzon (rooms from €70). A very good dinner can be had at Les Petits Plats de Célestin in Vierzon (menus from €22).

Leaving Vierzon on the D2076 take the D211 and then the D76 to the capital of Sologne, Romorantin-Lanthenay. François I wanted to make Romorantin the capital of France (François’ wife was born in the château). Hard to imagine now as this town has suffered in recent years from extensive flooding and the loss of one of its biggest employers, the car manufacturer Matra. One hidden gem in Romorantin is the Grand Hotel du Lion d’Or (rooms from €190, menus from €49) whose cuisine and décor capture the essence of the region. For further insights into this hunting and fishing area, visit Le Musée de Sologne (scheduled to re-open in 2020 – it was badly damaged by the 2016 floods) housed in two former mills.

This ancient region spans three departments, Cher, Loir-et-Cher and Loire and has a reputation for being slightly mysterious with its atmospheric forests and lakes. From Romorantin you could head north-west to the hunting château of Chambord, or directly north to the area of the lakes, but I was on a literary trail which would take me north-east.

Whichever direction draws you, make sure you take a minor road. Ponds, lakes and half-hidden properties are glimpsed through the trees. Imagine this on a misty autumn day and there you have the mysterious Sologne that Alain-Fournier depicted so well in Le Grand Meaulnes.

Fournier was born in La Chapelle-d’Angillon and many of the places that he knew as a child appear in his famous novel. The château has a permanent exhibition on the author but it is also fascinating in its own right, with many stories to tell. If you are lucky the present owner, Comte Jean d’Ogny, will be your guide – the visit ends with a glass of hypocras (bit like mead but not as sweet) and a sablé de Nançay biscuit.

Note: This article was first published in the February 2020 issue of FRANCE Magazine.

Previous Article Janine Marsh: In rural France the shops come to you
Next Article From legendary cakes to brilliant bees: 8 things we discovered about France in the September 2020 issue of FRANCE Magazine