From legendary cakes to brilliant bees: 8 things we discovered about France in the September 2020 issue of FRANCE Magazine 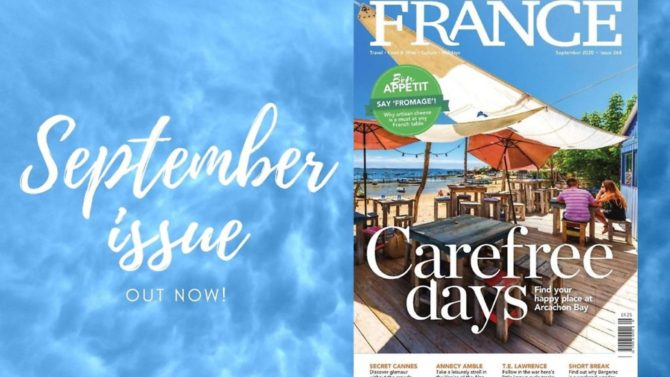 We never stop learning about France with every issue of the magazine! Here’s what intrigued us this month

Climb to the top for amazing views of the Arcachon Bay on France’s west coast.

Discover this natural wonder on an off-season jaunt with Alison Weeks on page 18.

2) Sarah Bernhardt, one of France’s most famous actresses, was the first person of either gender to play Hamlet on film

The eccentric star was also renowned for her menagerie of animals including alligators and tigers, and was rumoured to sleep in a coffin.

Get to know the legendary woman on page 76.

It’s also home to one of France’s biggest shark tanks, with 3 million litres of water.

Find out more family-friendly things to do in Paris with Brigitte Nicolas on page 30.

Nonetheless, there is still a fantastic statue of him in the town that’s a must-see.

Take a tour of the Dordogne gem with Sandra Haurant on page 32.

Leonardo DiCaprio, among others, is said to be partial to the ice creams at Glacier Vilfeu.

See another side to Cannes with Heidi Fuller-love on page 38.

6) The gâteau de Savoie is the stuff of legend

It’s said that the cake was invented when the Count of Savoy wanted to impress a visiting royal and asked his chef to create a super-light cake.

See what Jan Mitchell makes of the resulting dessert and of the Alpine town of Annecy on page 44.

In the village of Tessy-Bocage, you’ll find a wall of beehives originally built in the early 18th century.

Delve into the history of these incredible structures with Alison Hughes on page 48.

Now you, too, can follow in his tracks on the official Route de Lawrence d’Arabie, from Gironde to Haute Vienne.

See how Todd Mauer fared when he tackled the trail on page 50.

So what are you waiting for? The September 2020 issue of FRANCE Magazine is out now: order your copy here.

Previous Article Road Trip: Explore the Sologne region of north-central France
Next Article “Our aim is to create wines that truly give a sense of terroir”