Janine Marsh: In rural France the shops come to you 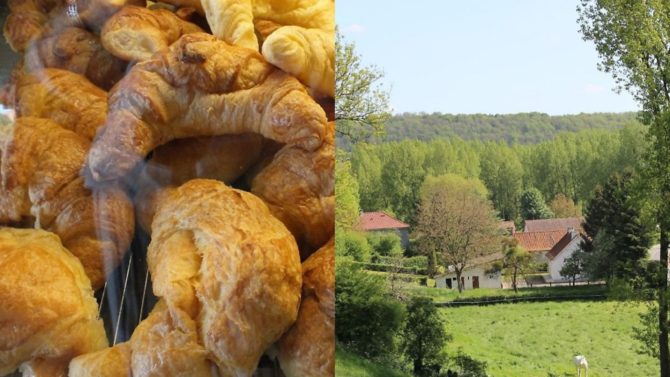 Conversations with the regular deliverymen is a highlight of life in France’s small rural communes, explains Janine Marsh

There are about 900 villages scattered throughout the lush countryside and along the Opal Coast in Pas-de-Calais. The department is one of the biggest in France, has no major cities and a population three times less than that of the UK. Some communes, as they’re called, have shops, bars and businesses, and some have nothing. There’s very little public transport in rural areas and often none at all, but in the Seven Valleys, where I live, instead of making those of us in villages with no shops get in our cars and pollute the countryside in order to get our daily bread and other stuff, the shops come to us.

On Tuesdays, Fish Man arrives in his truck, bibs the hooter loudly to let you know he’s there and stops at the homes of his regulars. He opens the side window of his mobile poissonnerie, unwinds the traditional blue and white striped awning, and the smell of fresh fish brings every cat in the village running.

Wednesday is the day Meat Man delivers. Friday is when Spice Man arrives with the general stores van.

Bread Man comes on Tuesdays, Thursdays and Fridays. We hang a bag out on the handle of the gate and he pops a baguette in it. Sometimes he stops to chat.

“Is that your doggy?” he asked, as Churchill our excitable German Pinscher pranced around trying to lick the baguette that was coming my way from the window of the van.

“Yes, do you want him?” I said, as Churchill went racing off down the road to chase a hare that had unknowingly popped its head out from under the hedge of the garden opposite.

Bread Man laughed, “non,” he didn’t, he said, but he wanted to talk to me in English from now on so he could help his teenage daughter with her English lessons. He asked me if I would correct his pronunciation so that he could tell her how to say things properly.

“Ow you say zis?” he asked holding up a croissant.

“Non…” he said looking at me suspiciously through narrowed eyes.

I breathed heavily into the h.

“Ow, ow, ow,” his brow was furrowed with effort.

“Ar, ar, ar.” He sounded like an excited sea lion.

“No, hhhhaaa,” I said, hoping no one could drive past and see me.

Churchill who had returned thankfully hare-less, jumped about gleefully at the sight of Bread Man, red in the face, heavy breathing all over my baguette. When I waved him off to Madame Bernadette who was waiting impatiently down the hill for her delivery, it being Tarte Tatin Tuesday at her place, I could hear him happily “ar ar ar-ing” as he went.

Sparsely populated it might be, but there’s no lack of entertainment here!

Janine Marsh is the author of The Good Life France and My Four Seasons in France. This piece was first published in Living France March issue.

Why I love every season in France

My life in rural France with 72 animals

Anything can happen on a promenade in rural France