Exploring the hidden gems of Paris 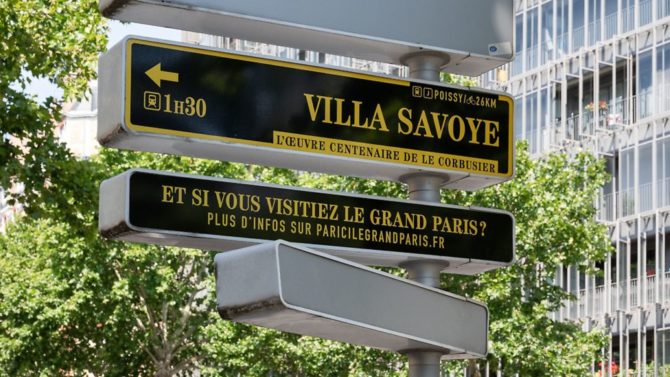 Whether you’ve been to Paris or not, everyone is familiar with the names Musée d’Orsay, Notre-Dame and the Bastille. Those who have been will know how overcrowded and touristic they can be. This is why a new signposting system has been launched in the French capital to direct visitors of famous landmarks to lesser known locations. The system, named ‘Par ici le Grand Paris’ places distinctive black and gold signs near popular tourist hubs, indicating the direction of a less busy alternative attraction in Greater Paris. The signs also include the journey time via public transport and the nearest metro stop, as well as an interesting fact about the signposted location.

‘Par ici le Grand Paris’ is the second collaboration between news hub Enlarge Your Paris and cultural centre Magasins Généraux, aiming to increase awareness of the rich cultural landscape of Greater Paris which is often overlooked by tourist landmarks in the centre.

Among the 43 signposts displayed in Paris until 5 October, we picked out some of our favourites.

If you’ve had your fill of the Musée d’Orsay, which welcomed 3.17 million tourists in 2018, follow the sign to Auvers-sur-Oise. The quaint village was home to a number of painters including Paul Cézanne, Charles-François Daubigny and Camille Pissarro. Now, you can enter the room where van Gogh spent his final days, spot the village scenes which inspired famous paintings, and visit the Absinthe museum.

Contemporary art lovers flock to the Centre Pompidou daily, but often overlook the Musée d’Art Contemporain du Val-de-Marne, also known as Mac Val. Located in a suburb of the city, the museum which was opened in 2005 contains over 2000 works by French artists to the present day.

Whilst you’re relaxing at the Bassin de la Villette, the largest artificial lake in Paris, look out for the sign directing you to Street Art Avenue. A short bike ride will take you to the huge stretch of street art and graffiti frescoes running along the banks of the Canal St Denis, where every summer new art appears along with live workshops and performances.

The spectacular Jardin de Luxembourg, which covers 25 hectares in total, is a tourist hotspot in Paris. For a quieter but equally beautiful setting, follow signs to the Parc de Sceaux, a stunning sprawling estate with an elegant château at its centre. A huge 180 hectars of land includes woods, waterfalls and sculptures.

Any fan of the works of Auguste Rodin will no doubt plan a visit to the Musée Rodin Paris, situated in the Hotel Biron. If you can’t get enough of his works, the lack and gold signpost will direct you to the nearby Musée Rodin Meudon. The estate was Rodin’s home for the last 20 years of his life, and features a tactile gallery, plaster gallery, and Rodin’s tomb.