Macarons are the most Instagrammed European food 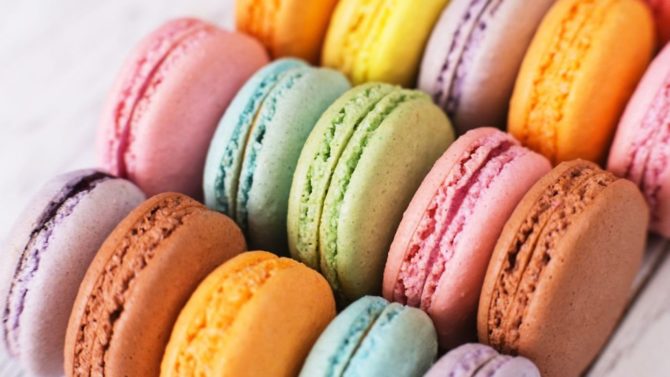 France’s iconic patisserie is flying the flag for European food posts on social media, according to a study of the most popular dishes on Instagram

The Gousto study analysed 150 million Instagram posts to reveal the most iconic national dishes across every country in every continent, and mapped 353 of the world’s most iconic foods.

European dishes accounted for 9% of the Insta-worthy dishes on the list, with French macarons taking the top spot with over 5 million posts bearing the hashtag #macarons. Second-placed Italy managed 1.7 million posts for pesto while Switzerland came third with just over 1 million posts for fondue. The UK just makes it into the top 15 with haggis from Scotland in 14th place, thanks to 142,000 #haggis posts.

The number of posts tagged #macarons also secured fifth place for French macarons in the top 10 most Instagrammed world foods, ahead of fried chicken for the USA and pesto for Italy.

Make your own chocolate macarons

QUIZ: How well do you know your French pâtisseries?

Must-try food and drink specialities from each region of France

Not to be confused with the chewy coconut macaroon, the pretty, pastel-coloured French macaron consists of two delicate almond meringue discs that are sandwiched together with a jam, buttercream or ganache filling.

The word macaron is derived from the Italian word maccherone, meaning fine dough. It is believed that the macaron originated in Italy and was introduced to France in 1533 when Catherine de’ Medici arrived from Italy to marry King Henry II of France.

Macarons gained in popularity in 1792 when two Carmelite nuns in Nancy in eastern France baked and sold them as a way to support themselves during the French Revolution. The nuns became known as the Soeurs Macarons and the Maison des Soeurs Macarons in Nancy continues to make them to the same centuries-old recipe.

Over time the recipe has been adopted and adapted by other regions of France. The macaron as we know it today was created in the 1830s in Paris and brands such as Ladurée and Pierre Hermé have since become synonymous with the iconic French patisserie. There’s even a National Macaron Day in March each year, which was established by Pierre Hermé in 2005.

10 of the best French pâtisseries in the UK

Who is the French judge on Bake Off: The Professionals?

Dining with a difference: unique restaurants in Paris