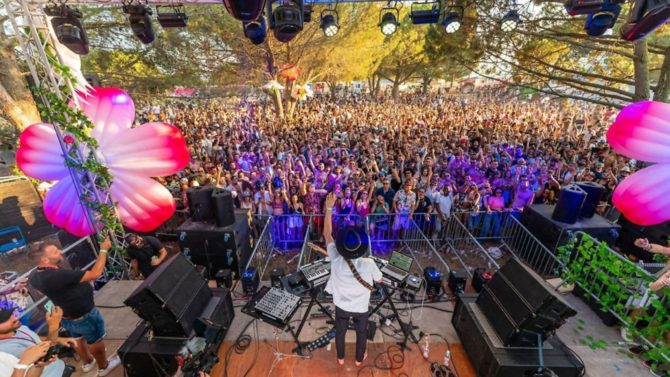 Despite a one-year hiatus due to Covid-19, the ever-popular event returned with a bang this July with a Flower Power theme and a giant inflatable swan watching over the crowd. The opening party on July 18 had a line up including Cyril M, Nico Moore and Delon. Greg Delon is a key figure in the electronic music scene in the south of France and owns the Way of House (WOH) music label. He released a new song in time for the Family Piknik opening party: ‘Sorry’ from his album ‘Delon’. Both Delon and DJ Cebb (Sébastien Thibaut), also part of WOH music label, are regular DJs at Paillote Paradise in Aigues-Mortes, popular with expats.

Speaking to DJ/producer Philippe Quenum, who spends his time living between London and Geneva, he said he loves Montpellier and was happy to be back following the Covid disruptions. Quenum is going to Ibiza in September to play for the closing parties. He also let us into a little secret that his manager Swann Decamme is in discussions with the owner of La Guinguette des Amoureux to hold a concert at Lac de Cécélés near Pic Saint-Loup, also host to popular music event Hortus Live.

For those who don’t know, Lac de Cécélés is an artificial lake a short drive to the north of Montpellier that only locals know about. To have a festival here would be spectacular. There is a similar one at Lac du Salagou called Le PianO du Lac, where a pianist plays on a floating island surrounded by guests on boats, kayaks and paddleboards.

As for the rest of the opening party, there was no mistaking Steffen Linck’s broad-rimmed black hat as he took to the stage as Monolink. Flying all the way in from Germany, he delighted audiences with his ambient, techno, electronica and house genres.

The climax to the festival was heralded by Mathame and Mind Against. Mathame is a DJ/producer duo developed by Italian brothers Amedeo and Matteo Giovanelli from Bergamo, Northern Italy. Recently, Mathame received attention for its release ‘Never Give Up’, named Essential New Tune by BBC Radio 1’s Pete Tong but it’s the remixes that get the adrenaline pumping. Mind Against is a Berlin-based electronic music duo made up of brothers Alessandro and Federico Fognini from Milan, Italy. They draw from psychedelic 1980s soundtracks and modern dance music to create a powerful sound. Their creativity is based on “looking to do something new and original rather than replicate what is already out there but our process tends to change a lot”.

Previous Article Who are the Kretz family members from Netflix’s The Parisian Agency?
Next Article The Olympic Games in Paris: Then and now