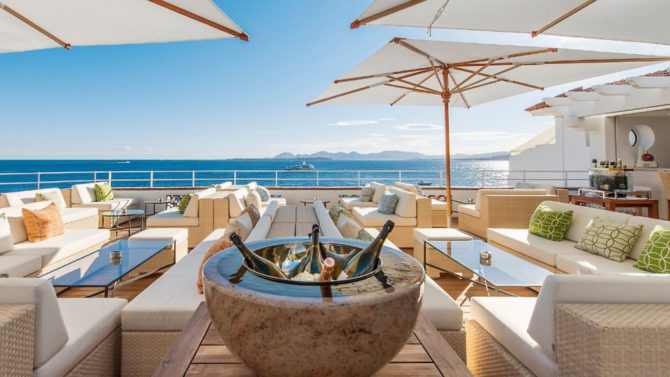 The legendary Hotel du Cap-Eden-Roc on the French Riviera celebrates its 150th year in 2020 and is marking the milestone occasion in style with new-look restaurants and menus. The three main dining areas have been redesigned by renowned Brazilian architect Patricia Anastassiadis, while three-Michelin-star chef Eric Frechon from Le Bristol Paris has worked with the hotel’s chefs to create a new culinary concept for the menus in the restaurants and bars.

Breakfast and lunch will be served in the Eden-Roc restaurant while dinner at the gastronomic Louroc promises to be an unforgettable experience, with a menu featuring dishes made using the region’s finest ingredients that bring together the flavours of Provence and the Mediterranean, to be enjoyed with sunset views over the sea.

“Eden Roc restaurant overlooks the Mediterranean and the Lérins Islands and we were inspired by the seawater crashing on the rocks below,” says Patricia Anastassiadis. “The colour palette showcases ocean blue and coral tones, evoking the sun setting over the water.”

The luxury hotel has confirmed that it will reopen on 1 July after closing due to the coronavirus outbreak, in line with guidance from the French Ministry of Health regarding hygiene and social distancing protocols. Guests will continue to have access to the saltwater swimming pool, tennis courts and fitness centre, and will have the option to enjoy spa treatments in outdoor cabanas or the gazebo. A private limousine transfer service is available from Nice airport 30 minutes away.

The iconic hotel on the Côte d’Azur’s glamorous Cap d’Antibes first opened in 1870 as Villa Soleil, a retreat for writers and artists that was the brainchild of the founder of Le Figaro newspaper. On discovering it in 1887, Italian hotelier Antoine Sella had a vision for a luxury establishment that would attract a discerning clientele from Europe and America, and the Grand Hotel du Cap opened its doors in 1889. Since then it has hosted some of the greatest names in art, cinema, literature and politics, including Marc Chagall, John F. Kennedy, Marlene Dietrich and Winston Churchill. It has become a firm favourite among A-list celebrities and film stars who can often be spotted here during the Cannes film festival.

Room rates will start from €1,150 per night including breakfast.

What is happening with France’s film festivals this year?

Previous Article All aboard for a leisurely boating adventure through Lot-et-Garonne
Next Article The Plus Beaux Villages you might not have heard of…and 7 other things we learnt in the July issue of French Property News, out now!