All aboard for a leisurely boating adventure through Lot-et-Garonne 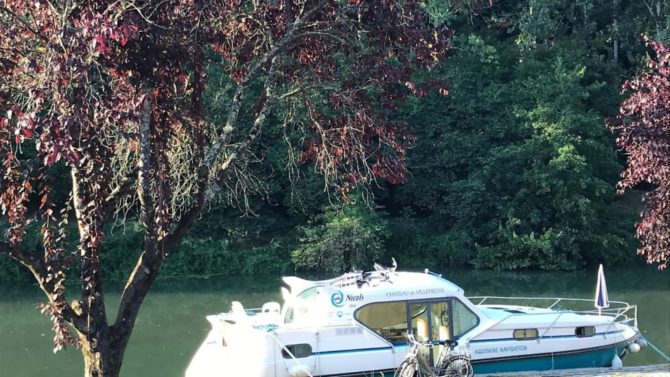 We are sitting outside on a warm early autumn evening, listening to mellow blues played live, enjoying historic Gascony’s finest specialities washed down with some delicious local Buzet wines.

It couldn’t be more idyllic or “French” really. It’s the final night of a week-long boating journey around Lot-et-Garonne, and we’re handing back the keys to our floating home the next morning. It seems fitting that our farewell meal is on the banks of the canal.

Buzet-sur-Baïse in Lot-et-Garonne gives plenty of options for exploring the waterways of south-west France. Depending on how much time you have, there are numerous options for itineraries. Due to slightly lower than usual water levels on the local rivers, we’d decided to spend a couple of days on the popular Canal de Garonne, followed by a few on the quieter River Baïse, before returning to the Aquitaine Navigation and Nichols boat base at Buzet-sur-Baïse.

Formerly known as the Canal Latéral de la Garonne, the Canal de Garonne dates back to the 19th century and runs 193km from Toulouse to Castets-en-Dorthe. At one end, it uses the River Garonne to continue to Bordeaux and at the other it joins the Canal du Midi, all together forming the Canal des Deux Mers.

Starting out on the canal gave us the chance to get a feel for the lock systems (seemingly different for every French waterway!) and to visit the prefecture of the Lot-et-Garonne département Agen, which we thought might be large enough to provide Sunday evening dining options beyond cooking on board.

As the sun still hid behind the trees lining the banks of the canal, it was a chilly start. The countryside on either side showed just how fertile the land is in this area. Vineyards, orchards, fields of ripe crops, all stretched as far as the eye could see. Even several plantations of kiwi fruit (I discovered this later on a jaunt with one of the boat’s bikes). Locks came and went without much in the way of drama. On this particular canal, the locks are all triggered by pulling a mechanism called a perche, leaving only the rope work and a button push once inside.

Arriving at Agen, we had the experience of the grandiose four lock flight leading to France’s second longest canal bridge, travelling over the Garonne River. It’s an impressive way to enter a town, pedestrians and cyclists strolling along the towpath at a similar speed.

Sundays in France can be tricky. We’d been looking forward to a meal out and figured that Agen might be large enough to defy the Sunday closing tradition. Whether our internet search failed us where insider knowledge may not have, once we moored up past the centre of Agen at quieter Boé, we found ourselves with little choice.

Michelin-starred dining at Mariottat, a taxi journey away, was beyond our means. Our most convenient option seemed to be a pizza place on a nearby retail park. Not quite the pretty café with local food and wine we had been hoping for. Mooring up the next morning across from the rail station in Agen, we had a chance to explore. Wandering the old town, with its picturesque medieval buildings, we enjoyed what would probably be our only taste of a French city on this very rural trip. A promenade along the River Garonne offered a view of the canal bridge we had arrived over, and we soon found ourselves in the square in front of the Hotel de Ville, the area also home to the Théâtre Municipal Ducourneau and the Musée des Beaux-Arts. After lunch in a pavement café (we had to make up for Pizza-Gate) and replenishment of supplies, we meandered our way back to the canal.

Our goal was the welcoming-looking Sérignac-sur-Garonne, which we had spotted on the way down to Agen. With open grassy areas, a huge plane tree, easy moorings and a sign beckoning visitors to the small town across the bridge, it was the perfect spot for us to deploy the barbecue we had hired for the boat. Soon, as the sun started to descend, we were sitting at one of the picnic benches enjoying our faux-filets with salad, washed down with some local red. The trauma of the retail park pizza was already starting to fade from our minds.

The next morning saw a scouting party walking to the village for fresh croissants and baguettes for our lunchtime picnics, a pattern we settled into for the rest of the week. Sérignac-sur-Garonne is a pretty village, with a few shops and cafes, as well as an unusual fairly-modern church with a twisted spire. It was just the snapshot of rural France we had been hoping for, and which Lot-et-Garonne seemed happy to deliver. Familiar countryside sliding by slowly – the maximum speed is 8kmph- we soon reached Buzet-sur-Baïse once again, this time turning to the right to enter the two-part lock that would take us down to the level of the River Baïse below. On our way towards Agen we had crossed over the Baïse on a small bridge, this time it was our turn to pass below that same canal bridge.

It had been suggested to travel the canal first, then the River Baïse and we were delighted that we had followed that advice. The river was quite a contrast to the largely straight-as-a-die canal, meandering its tree-crowded way lazily. This was no fast-flowing torrent. The Baïse is heavily affected by seasonal water levels, making it more or less navigable as you proceed. We had been advised to go no further than Nérac, due to low river levels, so we had all the time in the world to travel barely 20km.

Slow pace of life to Vianne

One of the key elements to a boating holiday is to embrace the slow pace, rather than trying to get too far too fast, so we were delighted to have that enforced. Surrounded by every shade of green imaginable – including the river – we pottered our way upstream. We glimpsed the odd chateau or house as we went, warm stone visible behind the verdure. Goats grazed along the river banks, while so many kingfishers – I now know they are known as martin-pêcheurs in France- and damselflies zipped by that it felt like we were travelling in a turquoise-hued kaleidoscope.

Stopping at exquisitely pretty Vianne, tying up next to its ruined mill and weir, gave us the chance to explore the lovingly restored walls and narrow streets of this little 13th-century bastide town. Just through one of the arched gates, a glassblower’s studio beckoned, showing the artist in action as well as the colourful (and pricey) fruits of his labours. An overnight stop here offered an al fresco meal on the town square, just minutes from the river. Confit duck, good red wine and laughter made for one of the most memorable meals of the trip, if you exclude the pizza of the first night.

Despite the progress of the year, the sky was unrelentingly blue and the sun surprisingly fierce as we passed pretty lockkeepers cottages and enviable riverside homes on our way upstream. We had been told that the view on entering Nérac was gorgeous, but the stone buildings seemingly tumbling down the hillside to a bridge across the river still impressed. The harbour area was simply stunning, with restaurants clustered on one side, artists’ studios on the other. Cobbled streets led up towards the main town, vibrant and modern, while the other side of the river was the old town, all half-timbered houses and locals playing pétanque. We were delighted that we had decided to stay two nights here, giving us ample time to relax and enjoy this charming bustling town, with its castle, riverside gardens and café-lined streets. A quick internet search delivered to us the culinary gem of the whole trip. Hidden down a narrow back street – the Rue Fontindelle- in the heart of the newer side of town was a tiny tiled restaurant, seating just 25 people. The Bistro de la Cave doubles as a wine shop, and good wine was not in short supply to accompany the market-fresh local produce cooked simply and presented beautifully. We felt like we had hit the foodie jackpot. Rolling back downhill to the boat we were glad to be staying put.

The next morning, we were first through the lock and mostly had the river to ourselves as we made our steady way back towards Buzet-sur-Baïse. We passed landmarks familiar from the journey upriver, like the lock with beehives nearby and the pretty lockkeeper’s cottage with pumpkins growing in the garden, now a Gite Rural. A stop at Lavardac treated us to a busy local market, replete with Floc de Gascogne, honey, cheese and wine. Back on the river, we soon tired of trying to count kingfishers and before we knew it, the canal bridge was passing overhead once again, marking the final kilometres of our journey back to the starting – and finishing- point of our trip. In our week travelling the waterways of Lot-et-Garonne, we had experienced some of the very best of rural France. And the pizza wasn’t bad either.

Lara travelled with Brittany Ferries from Portsmouth to Bilbao, and returned via Santander. The Aquitaine Navigation base (part of the Nicols network) at Buzet-sur-Baïse is around a four-hour drive from Bilbao.

Nicols offers a range of self-drive boats for parties of between 2-12 people and no previous experience is required. A three-cabin Confort 1100 boat sleeps six people and starts at €817 for a two-night short break or €1634 for one week from Buzet-sur-Baïse. Hiring bikes for the boat makes getting to small riverside towns easier.

Set sale for a French houseboat