Fred from First Dates takes a road trip to France 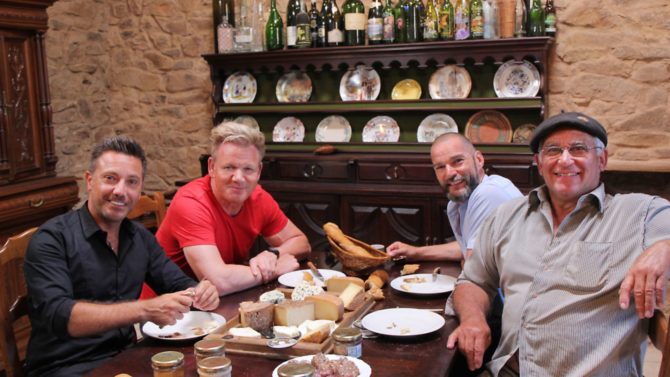 Fred Sirieix, Gordon Ramsay and Gino d’Acampo head off in a campervan to south-west France in their latest TV adventure

Three larger-than-life characters who are regulars on our TV screens have joined forces for an action-packed road trip to their home countries.

In the first episode they visited Gino’s home town of Naples where the chefs provided the cooking for a vow renewal ceremony.

Next to showcase his homeland is Fred, who is the General Manager at award-winning Michelin-starred restaurant Galvin at Windows in London and previously co-hosted Michel Roux’s Service on BBC2.

Fred, originally from Limoges, has over 20 years’ experience in the restaurant industry, starting his career as a Chef de Rang at the three star Michelin restaurant La Tante Claire, run by Pierre Koffmann, before developing his career in many of London’s top restaurants including Le Gavroche and Brasserie Roux.

In the second episode of his new show, called The French Connection, the three friends help deliver the first Arcachon Oyster Festival in south-west France. They arrive in style on a yacht from Sardinia only to realise they have landed on one of the many nudist beaches on the Mediterranean coast.

After a sharp exit, the rivals discuss their recipe ideas over martinis in Saint-Tropez before heading off to find their ingredients. The next stop is a 1970s Mediterranean oyster farm where they enjoy local seafood and fine wine. Gino hand-picks his oysters for the festival deep in the picturesque Etang de Thau lagoon, only to find out they won’t be ready in time for the festival as they need to be cleaned.

Meanwhile Fred’s flavour of choice for his oyster perfumes is alcohol and the friends travel by sailboat to France’s most famous Vermouth distillery, Noilly Prat, in the port of Marseillan. Fred gives Gino and Gordon a tour of the distillery before creating a Noilly Prat spritz cocktail with pink grapefruit.

He says: “We make the best Vermouth in the world. Why do you think that James Bond likes his martini with Noilly Prat? James Bond!”

Fred then takes them to the mountainous region of Roquefort to pick up some cheese for his oyster perfumes. The following day, Gordon takes charge and drives to Bordeaux to pick up his oysters and other ingredients from his very own Michelin-starred restaurant in the centre of town, Le Bordeaux Gordon Ramsay.

When they finally arrive in Arcachon, Fred introduces them to the festival’s co-host, known as the Oyster King of France, Joel Dupuch, only to find out that Gordon has known him for years as he supplies his restaurant.

Gordon settles on a breadcrumbed dish with fennel and lemon confit, Gino chooses Limoncello and vodka and Fred perfumes his oysters with various sprays of different French ingredients.

The day of the festival starts with an oyster-opening contest and after some intense competition, it comes to an emotional close when Fred’s father arrives to taste his oysters.

Gordon, Gino and Fred: Road Trip is on ITV on Thursdays at 9pm or catch up on the ITV Hub.

Learn all about Lyon with our handy guide