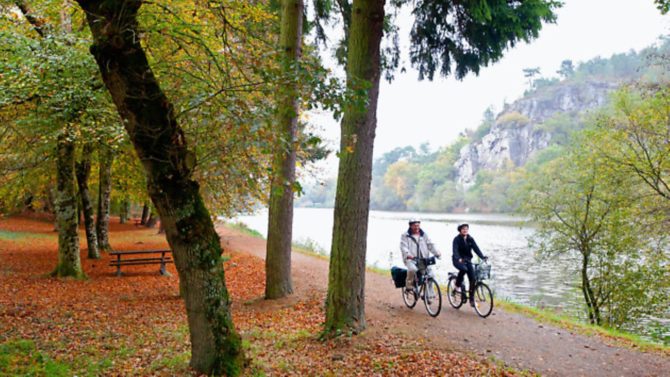 Need a mini-break to the great outdoors? Get active in France for a change of scenery one weekend and get a dose of exercise while you’re there

With so many pretty and safe cycle paths and the birth place of the Tour de France, France is a great cycling country which accommodates all cyclists’ needs. If you want to bring your own bike, you’ll have to drive or take the Eurostar but it’s probably easier to rent one once you’re there. The prettiest cycle routes follow rivers such as the Loire à Vélo or even the coast like the epic Vélodyssey. There’s even a special train service for the Loire à Vélo in the summer where you can take your bike for free. But you should also try the lesser known cycling routes that take you through French vineyards or cross country.

If you’d rather not get entirely wet but still want to enjoy the beauty of the French rivers, then canoeing is a great option. With either two-people canoes or single kayaks, you can cover a fair distance in just a few hours’ time. Many canoe hire companies drop you off at the starting point and you simply have to canoe down stream where the van will be waiting to pick you up. For definite wow factors, head to the Ardèche Gorges and the Verdon Gorge but the small local rivers will be less crowded and equally as charming.

France has many great walking routes to suit all levels but they all have breathtaking scenery to offer. From day-hikes on the GR paths, to longer weekend-long treks with stopovers in mountain refuges, you’ll be spoilt for choice. The best spots for walking and hiking are usually in the French mountain ranges over the summer, such as the Tour du Mont Blanc, but for walking paths that are available all year, try one of the many regional parks that dot the country and the forest footpaths, or the stunning coastal paths like the Côte de Granit Rose in Brittany.

Not for the faint-of-heart, canyoning involves hiking, rock-climbing and scrambling, with some added hair-raising abseiling paths and squeal-inducing jumps into deep, natural pools. Equipped with wet suits and helmets, canyoners evolve in an often stunning and unspoilt environment among rough gorges and fresh, clear mountain rivers. Canyoning is mostly for the fitter travellers who aren’t afraid of heights but it’s great fun and the source of serious adrenaline. You’ll also get to see a region’s natural wonders from a unique perspective. Corsica has some incredible canyoning spots but you can also go to Ardèche, or Alpes-Maritimes.

As pleasant as swimming pools can be, there’s something special about plunging into a cool river for a quick dip. Wild swimming is much more common in France than in the UK and there are many designated river or lake ‘beaches’ called baignades which are controlled for cleanliness and supervised by a lifeguard. Although mountain lakes are probably some of the most beautiful in the country, they’ll also be very chilly so if you prefer a gentle splash, head for some of the pretty lakes in the Morvan park in Burgundy or the rivers in the South-West and the Ardèche. Be ware to stay within the swimming perimeters on rivers and don’t swim alone if you choose to swim at an unsupervised spot.

Read more: Are these the best swimming pools in France?

For those of you who are very fit and wanting to experience some adrenaline-inducing sport, there’s always rock climbing, and with loads of impressive cliff faces and dramatic rocky outcrops, France has plenty to offer. Some of the favourite spots are the Tarn gorges, rock-climbing paths in the Alps with unique vistas on the Mont Blanc or in the Ecrins national park, and the vertical walls facing the Mediterranean in the calanques near Marseille and Cassis. There are plenty of climbing clubs in France to look out for.

If climbing a vertical wall is not your cup of tea, then you could try tree walking. Tree walkers are safely strapped in a harness which you buckle onto a wire which is strung up between trees to follow an acrobatic path near the treetops. Participants complete different activities and exercises between the trunks while suspended several meters above the ground. With different levels to suit everyone, it’s a great child-friendly activity. Any substantial forest you’ll come across will probably have a tree walking centre.

Although France may not be the first place you can think to go diving, there are some beautiful sites where you can explore the underwater world. If you’re not a frequent diver, then a simple first dive session will give you a taste of the joys of diving as, usually, you will not go below 6m. You can dive off the coast of Brittany and Normandy where you can see some fascinating shipwrecks or head for the warmer Mediterranean waters and some of the marine natural reserves of the French Riviera.