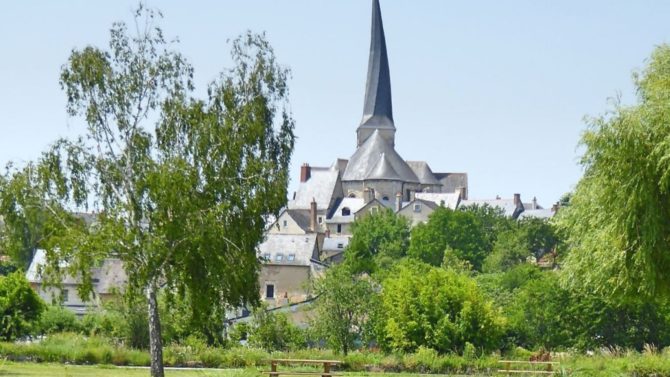 Tors, tordu, tourné, torsadé, vrillé and even hélico?dal, my French vocabulary is rapidly expanding. These are just a few of the adjectives used to describe the strange phenomenon of spires that are twisted or are not in kilter.

In the Association des Clochers Tors d’Europe (yes, it does really exist), there are 24 such spires in Germany, four in Switzerland, just three in England but between 70 and 80 in France. And in a little-known area of Pays de la Loire, le Baugeois in Maine-et-Loire, there are no fewer than six within a 10-mile radius of Baugé-en-Anjou.

This was enough for me to want to go and see them for myself and to try to get to the bottom of this intriguing phenomenon.

A church spire on the horizon is often the first thing you’ll see when approaching a village, pointing heavenwards above the treetops or fields of corn. It indicates the physical centre of the village – put rue de l’église into your sat nav and it will invariably take you to the place centrale – but it also symbolises the centre of the community.

If the spire is not straight as an arrow (une flèche translates as ‘spire’ as well as ‘arrow’), is not pointing straight to heaven, then maybe something is not right in the community – and this way legends are born.

The first church I visited was in Le Vieil-Baugé, which adjoins Baugé-en-Anjou, a Petite Cité de Caractère about 30 miles north-east of Angers. The church spire of Saint-Symphorien is twisted and it leans to one side, resembling for all the world a witch’s hat.

The spire has been struck by lightning three times and it seems that the twisting came after the rebuilding. Popular legends abound involving giants, stones from mules’ hooves and pairs of identical twins kissing the wrong spouse – but more interesting than these implausible stories are the modern-day theories, and there are just as many.

Strong winds is one theory, but it has to be said that le Baugeois is not any windier than other parts of France. Another explanation is that the spires were deliberately built twisted – and this is the case in some instances, but there is usually documentation to support this.

Having ruled out these two explanations in the case of Saint-Symphorien, Monsieur Amy, former president of the heritage society, then recounted a rather intriguing theory, first mooted by a visiting abbot.

Abbé Perraud was a man of the church who had a gift for water divining and dowsing. He had spent a lot of his life discovering watering places in Africa and also in France. His theory was that churches were often built on former pagan sites and these sites were themselves often built near water. During his research he discovered that there were energy lines which came to a point where two or three streams met, generating a force, which could feasibly cause the wooden structure of a bell tower to warp.

My guide Nicolas and I exchanged glances – this seemed a little far-fetched, but when we learnt that there are indeed three sources next to the altar, then this suddenly became a fascinating idea.

Feeling more and more like sleuths, Nicolas and I headed off to our next destination the church of Saint-Denis in Pontigné, some five kilometres the other side of Baugé-en-Anjou. Here we were met by former mayor, Monsieur Sagon, who had an obvious affection for his church, which apart from its twisted spire has some incredibly life-like medieval wall-paintings.

Surprisingly, M. Sagon was in favour of the ‘strong winds’ theory as an explanation for the twisted spire. But he also mentioned that the wood from the nearby Chandelais forest, which has been used in construction for centuries, has a particularity – that even when well-seasoned it has a tendency to twist. So we had another theory to add to our list.

Next up was the church of Saint-Étienne in Fougeré to the north of Baugé-en-Anjou, notable for its highly decorated ‘upturned boat’ ceiling, as well as its twisted bell tower. Here Monsieur le maire was more for the ‘nobody knows’ opinion, but according to Abbé Perraud this is another of the sites where energy lines meet.

And so it was on to Jarzé where the water theory seemed to, well, hold water, with the presence of a stream running directly under the church of Saint-Cyr and Sainte-Julitte’s. The stream feeds into a lavoir which is just a few steps away. Interestingly, the twisting of this spire started fairly recently and it is continuing to turn.

Next stop was St-Martin-de-Vertou at Fontaine-Guérin. With a name like Fontaine-Guérin it might be thought that the water theory was bound to hold sway, especially when we learn that Saint Martin de Vertou’s forte was unblocking sources.

But this is the one church on our travels where the origin of the twisted tower is known to be deliberate. This is the work of the compagnons du devoir, those skilled craftsmen whose work is in evidence all over France.

The tower here is sinistrogire, meaning it twists from right to left, unlike the other towers which twist towards the right. It is possible to access the bell tower to see the deliberately constructed carpentry for yourself.

And so it was on to our final church in Mouliherne, dedicated to Saint-Germain. The interior is very beautiful with vaulted ceilings and a gleaming bell on display which merits closer examination.

Behind the church there is a lanterne des morts (an ossuary) – which is rare in this part of France. Madame Laurent, president of the local heritage society, was ambivalent about the cause of the twisted spire, but did tell us that the whole area was criss-crossed with tributaries of La Riverolle river and that there used to be numerous mills along the river – even the name Mouliherne derives from Moulin Herle.

So, the mystery of the twisted spires remains a mystery. But for my money, Abbé Perraud’s theory is not so far-fetched. The jury is still out, but when we were driving through the village of Sermaise, Nicolas pointed to another church spire.

“See that spire, one day I was driving through here and was convinced that it had started to turn,” he said. In fact it is true. The spire has not reached the minimum amount of twist to be officially classified as a clocher tors, but it is definitely on the turn. So in another few years there may be a seventh twisted spire in Le Baugeois.

Previous Article Quiz: Can you guess the prices of these French properties?
Next Article Buy a manor house in France!