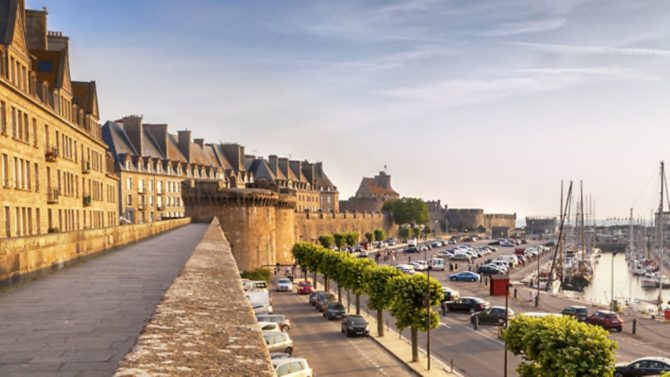 From captivating coastal towns to mighty medieval settlements, here is our pick of places to go in Ille-et-Vilaine in Brittany

Perched on the Côte d’Émeraude looking out towards Blighty, St-Malo has a rich maritime heritage. In the 17th and 18th centuries the port was used by merchant ships and by privateers who sought to protect the coastline from the threat of English invasion. Nowadays, visitors can admire the impressive fortifications, relax on the broad, sandy beaches and venture out to granite outcrop islands. The star attraction here is, of course, the well-preserved, 12th-century ramparts which stretch for two kilometres and surround the citadel, the beautiful, old walled city known as the ville intra-muros. A walk around these mighty granite walls will offer splendid views of St-Malo’s labyrinthine streets on one side, while on the other, visitors can take in panoramic views of the rugged Brittany coastline and the deep cobalt sea.

This upmarket seaside resort on the opposite bank of the River Rance from St-Malo first caught the eye of wealthy American and British visitors in the 19th century and has never looked back. The former fishing village was France’s top summer resort until the French Riviera took over in the 1930s and attracted wealthy celebrities, businessmen and even royalty to its shores. Vestiges of its glamorous past exist in the form of the many cliff-side, belle époque villas which you can admire on one of several guided tours run by the local tourist office. Today this town is prized by families, attracted by its fine sandy beaches which include Plage de l’Écluse. Situated right in the middle of the resort, this popular beach is home to rows of stripy tents all through the summer and serves as the backdrop to the town’s annual British film festival, both of which have earned Dinard the reputation of being the most British of Brittany’s towns. Brittany’s answer to St-Tropez is also home to a swish casino, the meeting point today for many well-heeled tourists, and a well-appointed thalassotherapy spa.

7 villages in Tarn you need to visit

One of the benefits of living in a coastal town has to be the access to a wealth of fresh seafood. Cancale, the most northern town in Ille-et-Vilaine, is a seafood lover’s dream. Mention the town’s name to any French person and they’ll instantly tell you what it’s famous for – oysters. These popular molluscs have been cultivated here for centuries, and more than 15,000 tons of them are produced here each year. Unsurprisingly, the ‘king of shellfish’ is the plat du jour on countless restaurant menus along the main port area, known as La Houle, and a visit to Cancale is not complete without sampling them. The tasty molluscs can also be bought by the tray load at any one of many stalls which line the seafront.Cancale also has plenty to offer walkers; the GR34 old customs officer’s path also passes through here and will take you north to the rugged headland Pointe de Grouin or west along the Baie de St-Michel, from where you can spot the iconic island promontory, which lies in neighbouring Normandy.

Tucked into the department’s eastern corner, this tranquil, medieval town is home to one of the finest fortresses in Europe. Perched atop a promontory sheltered by hills and surrounded by marshland, this mighty château was the perfect place from which the Duchy of Brittany could defend its land from the French. The current site dates back to the 12th century and comprises three main enclosures whose deep, impenetrable walls are dotted with towers, the most impressive of which is the Tour Mélusine. Visitors young and old can look forward to a thrilling visit around this imposing château, whose rich history is vividly brought to life through a multimedia display. The medieval château boasts impressive ramparts – walk south of the château along these walls and you will arrive at the delightful old town, where quaint stone properties stand shoulder to shoulder with half-timbered houses. Among the many noteworthy buildings here are two impressive stone mansions, which belonged to the sisters of 18th-century writer and politician Chateaubriand, both of whom lived in the town for many years.

For true medieval quaintness you can’t beat the lovely little town of Vitré. Situated 40 km east of Rennes, it is home to a stunning collection of medieval buildings; on Rue de la Baudrière, grand, high-rise timbered houses are interspersed with crooked buildings so authentic that they look like they belong in Harry Potter’s Diagon Alley. Meanwhile, on Rue de la Poterie is a number of charming porch houses, whose first floors extend over the street to create an arcade. Vitré’s other great claim to fame is its 13th-century, fairy-tale château, which comes complete with pointy slate turrets. In the 16th century, this wonderful structure hosted the Parlement de Bretagne on three occasions when plague spread throughout Rennes. Today, the château is home to a museum exploring its history and that of Vitré.

This vibrant city in south-eastern Brittany beautifully arranged, with a stately-looking centre and a fine medieval quarter, which is a pleasure to wander around during the day. At night, Rennes is bursting with lively bars and superb restaurants that are popular with the some 63,000 students who live here. A large proportion of Rennes’s vieille ville was burnt down in 1720 in a devastating fire but there is more than enough here to charm lovers of medieval architecture; a wander along the streets surrounding Place Ste-Anne will lead you past higgledy-piggledy, half-timbered houses (of which there are over 250) and sculpted stone facades. Rennes is also a great place for shopping, with an array of boutiques and quirky, one-off shops throughout the historic centre inciting you to browse for more unusual gifts. But to experience shopping like a local there could be no better place than the weekly Saturday morning market on Place des Lices. This large open-air market sells everything from field-fresh green vegetables and sunflowers to a galette-saucisse, a cooked sausage wrapped in a buckwheat crêpe, which is something of a speciality here.

Previous Article How easy is it to be a vegetarian in France?
Next Article The French tradition of La Chandeleur