How easy is it to be a vegetarian in France? 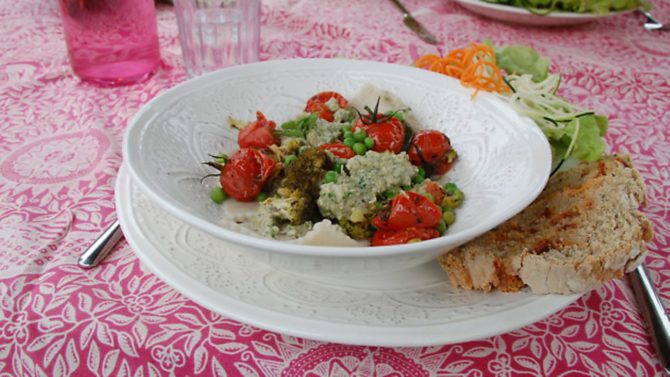 Being vegetarian in France hasn’t always been easy. But with an increase in vegetarian and vegan restaurants, things are gradually starting to change, says Mark Sampson

The other day I found myself caught short in a French supermarket. Intending to ‘eat on the hoof’, the only sandwiches on offer were filled with either chicken or ham. ‘Typical,’ I thought. As a vegetarian in France, I have often found myself with restricted choice.

But then I wondered if things are really as difficult for vegetarians as they were when my family settled in France over 20 years ago.

Back in the bad old days, when lardons (or bacon bits) and pasta seemed to qualify as vegetables, when an omelette was about the only vegetarian option, it was so difficult that we simply gave up eating out.

When invited to eat with French friends, we often felt guilty for the stress we created. The idea of a plat principal that didn’t involve meat or fish was so alien to their traditional cuisine that they simply didn’t know how to cater for us.

Our daughter had the same problem throughout her education. Sometimes at the end of her school day, she would be exhausted – not from all the lessons, but more from the lack of food. Turning down the lentils because they’d been cooked with the chicken was surely just a sign of caprice.

8 of the best vegetarian restaurants in Paris

Attitudes towards vegetarians are changing in France

But that was then and this is now and the good news is that things are beginning to change. Menus include vegetarian options and even more complex dietary requirements no longer trigger kitchen meltdown. It’s now possible that someone with a gluten or dairy intolerance can be happily accommodated.

So is there any harder evidence to substantiate my gut feeling? Élodie Vieille Blanchard is president of the AVF (Association Végétarienne de France). She points out that in 2008, the association had 500 members. Today there are 5,000. “There is a very active young vegan movement, particularly in Paris,” she tells me. “You only have to look at how many more vegetarian and bio products there are available now. But it’s not just the young. A survey of 2016 shows that 3% of the French population is now vegetarian, but around 10% would like to be.”

The World Watch Institute estimates that livestock and their by-products create 51% of all greenhouse gas emissions worldwide.

An area of Paris around the 9th and 10th arrondissement now has so many vegetarian and vegan cafés, restaurants and shops that it has been dubbed ‘Veggietown’.

A law of 2011 stipulates that protein in school meals should derive uniquely from animals. The AVF, however, is working with ANSES (the French agency for Food, Environmental and Occupational Health & Safety) to try to ensure that a suitable vegetarian alternative is always available.

How we built our own eco-house in Normandy

Advice for vegetarians in France

It’s often a good idea to ring a restaurant in advance where you fancy eating to discuss any dietary requirements and check that they can cater for vegetarians.

You may not always find health food products in supermarkets, but most towns have at least one magasin bio where you’ll be able to buy them.

Parents of vegetarian children at school should find out who is the gestionnaire of the canteen facility in order to discuss what alternative provision is or should be made.

If all else fails, learn to love pizzas!