3 of Haute-Garonne’s prettiest villages to visit 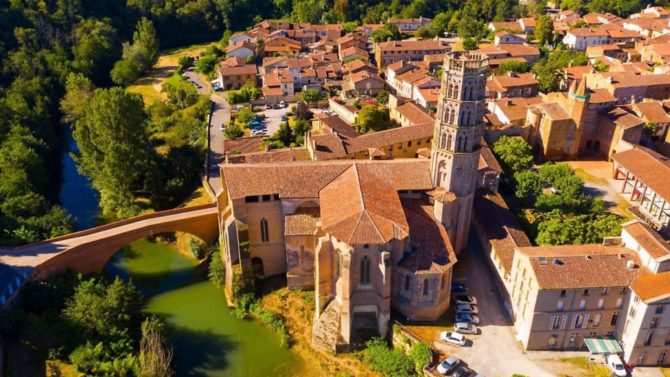 From striking cathedrals to unusual festivals, the villages of Haute-Garonne have plenty to offer

Haute-Garonne’s capital city, Toulouse, is famous for its pink bricks and buzzing atmosphere, and many visitors to the area don’t venture further than the city limits. But there is so much more to this happy corner of France for those who want to explore further. From the foothills and peaks of the Pyrenees to the peace and quiet of the Canal du Midi, Haute-Garonne has plenty to offer, including three charming villages with some particularly noteworthy attractions.

One of the area’s most popular gems is the village of Saint-Bertrand-de-Comminges, a tiny village 90 minutes from Toulouse. It may be small but it makes a big impact, thanks to its surprisingly grand cathedral, which stands proud at the summit of hill surrounded by the green foothills of the Pyrenees.

The road that leads to Saint-Bertrand-de-Comminges takes you through a verdant plateau before curving suddenly up the steep incline that leads to the fortified village, where the stone walls seem to emerge from the rocks on which they are built. When you stand by the ramparts today, you can hear cowbells clanging far below, and see a perfect aerial view of the sheep and horses grazing in the fields.

On a clear day you can see for miles from here. On a wet day, you’ll wander the pretty streets with your head quite literally in the clouds. And even on a rainy day, you’re in the right place: the village is home to La Fabrique de Parapluies, where you can buy handcrafted umbrellas

The cathedral of Sainte-Marie was built by Bertrand de L’Isle, the bishop of Comminges, who was later canonised, and from whom the village takes its name. The original architecture has been updated over the centuries and the result is a striking mix of Roman and Gothic styles. Part of the cathedral can be visited for free, but with a ticket (€5 for adults, €2.50 for over 12s and free for little ones) you can access the most interesting parts of this intriguing place. Inside, the scent of wood polish mingles with incense and everything appears to be oversized, from the height of the ceiling to the dark wooden choir stalls, which were carved by Renaissance artists in the 16th century.

But there is one curiosity that makes this church particularly unusual. How many times have you seen a crocodile hanging from the wall of an ancient place of worship? On one of the pillars – I’m not saying which, you’ll have to look for it – a crocodile hangs with its tail up and its face pointing down, as though waiting to surprise unsuspecting visitors.

There have been many myths and legends surrounding the arrival of this prehistoric-looking creature; some even said bishop Bertrand himself caught and slayed the beast by the banks of the Garonne. The most likely theory, though, is that it was given as an offering to Saint Bertrand in the 18th century by a pilgrim wishing to give thanks for protecting him on his journey.

Penny Dickinson of Toulouse Walking Tours frequently recommends the village to customers as a day trip from Toulouse. “It’s a very special place, with an incredibly rich history,” she says. “It’s believed there were people here in the first century BC, and it is likely this was a significant Roman settlement.” Indeed, on the flat land beneath the village, you can still see the remains of Lugdunum, a Roman town which may have been home to as many as 10,000 people.

Before you leave the area, take a trip to the nearby Basilique Saint Just, which was built with marble and stone from the Roman settlement. If you stand in the right spot, you can take a photo with the basilica in the foreground and the cathedral high against the mountains in the background.

The arable fields and hedgerows around Rieux-Volvestre stretch over the hilly landscape all the way to the Pyrenees, whose white peaks shine in the distance. The village was once on the list of Les Plus Beaux Villages de France, but its popularity got the better of it; the number of inhabitants has now grown to more than 2,000, the maximum limit for villages given the title.

It is, however, one of the Plus Beaux Detours de France, which groups together must-see sites outside the standard tourist trails. And it doesn’t take long to see why it makes the grade. The centre of the village is a compact maze of streets lined with russet rooftops, warm coloured walls and wooden shutters, and at its heart is a cathedral with a tall circular tower built with an intricate pattern of red bricks. The arches around the main doors of the cathedral were stripped of their saintly statues during the Revolution, but the inside is ornate and colourful.

To see the charms of the village, take the time to explore the area off the main road on foot. On an ordinary day, it is quiet and calm. You will find narrow streets flanked by half-timbered houses built with bricks that have been rounded by the weather and the centuries, and perhaps the odd cat lazing on a windowsill in the sun. The locals chat over coffee on the terrace beneath the covered market, or sit along the banks of the Alizé river, fishing in the slow-running water by the 17th-century bridge, the Pont de Lajous, beneath the yellow cliffs.

But on the first weekend in May each year the streets come alive, as villagers, young and old, come out wearing traditional clothing for the annual Fête du Papogay, a festival devoted to the ancient art of archery.

The event can trace its roots back to the 14th century, and today it is marked by a procession with floats and marching revelers, beginning at the church and ending with a very particular archery contest. Participants take aim with bows and arrows at a painted wooden model of a parrot – papogay is a variation of the Occitan word for parrot – at the top of a huge, specially built, wooden tower, and the first to hit the bird is crowned king of the festival. The village has a small museum, the Musée du Papogay, dedicated to the history of this rather eccentric tradition.

South-east of Toulouse, in a part of France that feels like the gateway to the Mediterranean, is the Lauragais, a rural area with sunflower fields, undulating hills, and some very lovely places to visit. The sleepy village of Saint-Félix-Lauragais is one of them.

Saint-Félix-Lauragais boasts an 11th-century castle which welcomes visitors between April and September, a 14th-century church and a history as colourful as its half-timbered buildings. Like Saint-Bertrand-de-Comminges, the village stands near the site of a Roman camp, and later it was home to a Visigoth fort. What’s more, this is the start of Cathar country, and it is believed that in the 12th century the village, and its castle, played host to the first ever Cathar council.

This fertile area was known as the ‘Pays de Cocagne,’ or land of plenty, thanks to some very special local crops. The pastel plant was highly prized for its seed pods, or ‘cocagne,’ which were ground down into precious blue woad dye, a colour that was highly sought after and hard to create. The pastel dye was so popular that it brought riches to merchant families in the 15th and 16th centuries – three of the mills used for making the dye can still be seen outside the village walls. And as you might expect, Saint-Félix-Lauragais celebrates its illustrious past with a festival; la Fête Historique de la Cocagne takes place each year at Easter.

Just on the outskirts of the village you will also find an English cemetery, where the remains of soldiers who fought with the Duke of Wellington in the Battle of Toulouse in 1814 are buried. There was no fighting here, but the soldiers set up camp in the area, and those who were laid to rest here were lost to illness or injury. There are no gravestones, just cypress trees and a small monument to mark the spot.

The heart of this fortified village is its beautiful market square, with its covered hall and slightly crooked half-timbered buildings in sunshine hues. The market still takes place here each Tuesday, under the watchful eye of the Virgin Mary, whose statue stands tall over the square. She was placed here to protect the villagers in the 1840s during an outbreak of cholera. But perhaps its biggest draw is the view. On the ramparts of the village, you’ll find a viewpoint from which you can see the vast plains of the Lauragais, the rolling hills with their wind turbines making use of the Autan as it sweeps through, and in the distance the Montagne Noire and the Pyrenees.

Discover Nérac in France and its historic château

New flights to Toulouse in France launched by Jet2

Previous Article 3 open-air swimming spots in Paris
Next Article Who are the Kretz family members from Netflix’s The Parisian Agency?