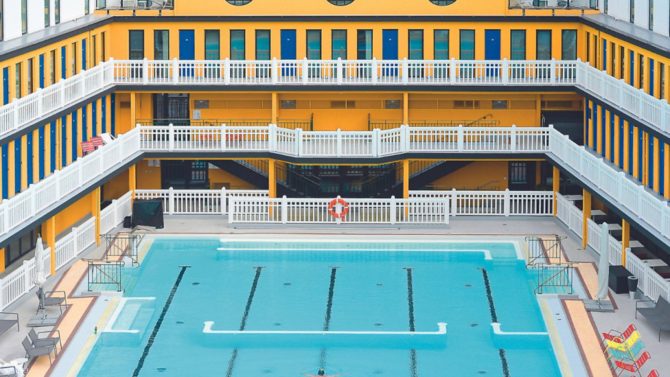 First opened in 1929, Molitor was Paris’ most popular swimming baths, with the five-times Olympic medallist Johnny Weissmuller invited to the opening and working there as lifeguard during its first summer. It became a place for socialising and events, hosting a Fête de l’Eau and surrounded by sought-after restaurants. It sadly closed in 1989 and lay abandoned for 20 years before it was restored and rebuilt by Accor Hotels, which promised to stay true to the building’s original architecture. It reopened its doors as Hôtel Molitor Paris in 2014 with its executive rooms offering an impressive view of the summer pool through an Art Deco porthole. During their stay, guests have access to the 46m outdoor pool, the 33m indoor pool, a fitness centre and Spa by Clarins which has its own hammam, sauna, tea room and reading room. You can also become a member of Club Molitor, giving you access to the iconic pools, designed by the architect Lucien Pollet, which are open all year round, as well as the gym. It also offers a range of classes from aqua biking to water aerobics. Or if you prefer to simply enjoy the atmosphere and surroundings, book a table at the restaurant, Urbaine Brasserie, bar or rooftop terrace, which is open to everyone from May to September.

This summer the riverbanks and canals of Paris will again resemble a seaside resort with parasols and deckchairs in pride of place at the free Paris Plages event at the Parc Rives de Seine and the Bassin de la Villette, which runs until 22 August 2021. For a more tranquil swim, head to three pools that make up the swimming space beside the Canal de l’Ourcq. On the quayside there will be beach huts, showers and toilets as well as four kiosks and two ice-cream sellers for a well-earned snack. Swimmers young and old can enjoy the fun from 11am to 8.30pm.

The floating Josephine Baker swimming pool is a giant barge moored next to the Bibliothèque François Mitterrand on the majestic River Seine. Named after the 1920s singer, its pool is 25 metres long and 10 metres wide. It comes into its own in summer, when the glass roof opens up to reveal a sun deck providing a fantastic view of the river. There is also a paddling pool for children, saunas, hammam, Jacuzzi and a gym. It is open until 11pm in the week in the height of the season and entry is €6.50.

Le Chat Noir: How did a simple black cat become emblematic of Montmartre’s golden age?Enjoy a rural retreat just an hour from Paris

The 10 most popular gardens in France

A guide to the Île de France region