Raising a family and building a career in Normandy 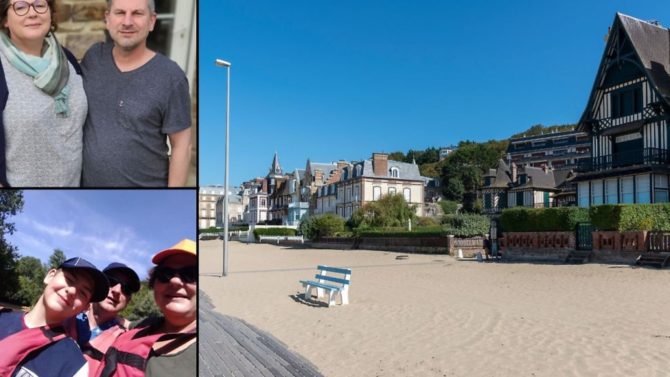 Clécy in Calvados is an ideal place to bring up children, says Rachel Johnson

Rachel Johnson moved to France with two young children in November 2000 and since has worked in a shop on Mont St-Michel, bought a stone cottage, and spent many hours on the nearby beaches

Where are you from and what brought you to France?

I’m from Humberside in northern England, but it won’t be too much longer before I will have lived most of my life in northern France! I moved to France with my two young children in November 2000. It wasn’t a calculated move on my part; it just seemed natural. My mum had a small bolthole in the village of Roz-sur-Couesnon in Ille-et-Vilaine, Brittany, which she bought in 1992 in preparation for her retirement. We had been holidaying regularly there since then and really enjoyed what life in France seemed to offer. Even prior to that, I have a very strong memory of my first French lesson at secondary school and thinking ‘Rachel, you had better pay attention; you are going to need this’. I con continued through A-level and into university studying French with no real idea as to why it was going to be so important.

What do you do in France?

I hadn’t really worked out a plan before we arrived here; I didn’t spend any time preparing or thinking about our future here. It just seemed right at the time and we absolutely loved being in such a beautiful area of France with a view of Mont St-Michel from our back garden. I was lucky enough to find a job almost immediately in the museum shops belonging to the La Mère Poulard brand on Mont St-Michel. It was a joy to work there; the view was different every day depending on the light, the mist and the tides. Getting this job was a huge break – I had no idea of just how lucky I was until much later, but I was naive and convinced that if I wanted to work I would find work.

My background in French helped but make no mistake, I started from scratch! My education in French grammar really held me back, I could hear all my grammatical errors and didn’t want to sound silly until I heard Jane Birkin speaking on French television with her very strong English accent despite more than 30 years here – this was my ‘déclic’, I thought if Jane can do it, so can I!

Working for La Mère Poulard really helped my French language skills come on in leaps and bounds, and by the end of it I could sell in French with no problem (and Japanese!). However, it was seasonal work so I trained in accountancy in my spare time. When I saw an advert for an English-speaking assistant at Crédit Agricole Britline bank in Caen, I went for it. I attended an interview for a short-term contract and I’ve been there ever since. I progressed and held different posts at CA Britline but also for our partner banks in other regions (while remaining in Caen), finally becoming head of marketing and development in 2015. In 2018 I wanted a new challenge and applied for a branch manager post and have been in this role now for just over three years. Altogether I have been at CA for 17 years.

I bought a stone cottage in Calvados, as it’s closer to the bank; it needed cosmetic work but not much else. My daughter Charlotte was two-and-a-half when we arrived in France and was accepted at the maternelle (primary school) immediately. Now grown up, she and her partner Tony live close by and have two daughters of their own. My son Robert was only 11 months old and he now speaks English with a French accent. In 2006 I met my French husband to be. It was a whirlwind romance; we celebrated our civil partnership in 2007 and married in 2020. Our son Louis was born in 2008.

How has it been bringing up children in France?

It wasn’t always easy in a new country trying to do my best for my children and having to make difficult choices but they had a lovely childhood. They stayed with my mum in Brittany when I first worked in Caen and I went home at weekends but it was tough. As soon as my contract became permanent, nine months after I started, we moved to Caen. The kids went to the local school in Thury-Harcourt. They enjoyed playing rugby; the school had a partnership with the Ovalie Caennaise women’s rugby team and they helped coach the children. Louis loves anything to do with nature, fossils and palaeontology – we’re in the perfect place for that. In collège, Robert took up kayak-polo and his team won the national French championships twice. The schooling here is excellent.

Our favourite place was the beach at Cancale just over the border in Brittany. It has a small cove, no shops or distractions, fine yellow sand, rockpools and clear blue sea deep enough to enjoy without having to walk two miles to paddle! We spent many hours here and on the other beaches and love Cherruiex where you can take a tractor ride to visit the mussel beds.

7 reasons to buy a house in Manche

Finding our dream home in Brittany

What activities make this such a great area for families?

Within 10km of Clécy we have a huge number of outdoor activities including paragliding, horse riding, golf, swimming, kayaking, climbing, walking and cycling. The Voie Verte means you can cycle, skate, scooter or walk in complete safety along the coast and glorious countryside. There’s also an equestrian theatre in the summer. Of course, there are also great beaches, museums, lots of historic sites and cultural events. You never run out of things to do.

We love our local Sunday market in Clécy – it’s vibrant and friendly. We can buy everything we need, from wonderful Normandy cheeses, cider, calvados, pommeau and apple juice to organic pork, beef, vegetables and honey direct from the producers.

There’s also a miniature chemin de fer, with model trains and a little ride-on train, and bouncy castles – the kids love it. And we love the guinguette, a traditional restaurant on the banks of the River Orne where you can hire kayaks, go climbing, whizz down the summer toboggan run or try the ‘death slide’ across the Orne!

Learn more about life in Calvados in the October issue of French Property News out soon!