Discover the alternative side to Paris in a weekend 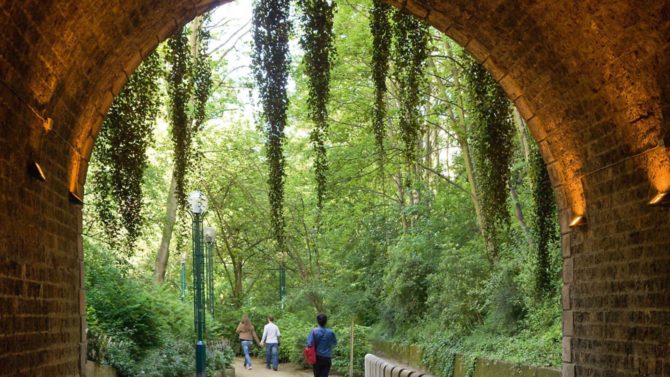 A weekend visit to Paris has never been so easy, but have you uncovered all the city’s hidden secrets? Follow our steps for an unusual and alternative visit to Paris.

The city’s mayor, Anne Hidalgo, has made no secret of her vision of a ‘Paris of the future’, rejuvenating neglected districts with an influx of new architecture and opportunities for businesses, residents and tourists. In her words, “a city like Paris should be able to reinvent itself at every moment in order to meet the many challenges facing it.”

It was Baron Haussmann who, in the second half of the 19th century, first ‘rebuilt’ Paris by demolishing crowded medieval neighbourhoods and replacing them with a logical layout of wide avenues, squares and elegant honeyed facades. But times are again moving on; Paris and its suburbs are now home to almost 13 million people and it has established itself as one of Europe’s financial and economic capitals. Developers have been building modern additions on the foundations of former transport links and beside historical landmarks – and these make a fascinating alternative focus for a weekend in Paris.

One repurposed link is the Petite Ceinture (little belt), a steam railway line built in the 19th century to connect the city’s train stations and transport goods through the arrondissements. The development of the métro and the motor car led to its decline, and from the 1930s, stations were abandoned and the tracks became overgrown. Now, some parts have been rejuvenated, with stations being turned into bars and cafés, and cutting-edge modern architecture rubbing shoulders with the Haussmann buildings constructed at the same time as the railway.

The old station of Passy-La-Muette, which opened in 1854, overlooks the Bois du Boulogne and has become a chic restaurant. La Gare is one of the best places in the capital to step back in time while enjoying lunch or coffee; the striking vaulted space was designed by young architect Laura Gonzalez with plush navy furnishings, geometric patterns, brass mirrors and marble.

Follow the old railway tracks round to the opposite side of Paris to discover urban rejuvenation on a greater scale in the shape of the Rive Gauche, a new neighbourhood just south of the River Seine in the 13th arrondissement. This 130-hectare area was once home to thriving industries including the Grands Moulins (flour mills), and is now a multi-faceted architects’ playground, pedestrian-friendly and accommodating the Université Paris-Diderot in some wonderfully quirky buildings.

One is enveloped in delicately latticed green concrete, while others are painted bright orange; sleek black cubes are dotted between playfully painted street posts; there are hanging gardens, and even Impressionist murals painted on the balconies of one apartment block. The architectural pinnacle is the Bibliothèque Nationale de France, a quadrangle of buildings designed to look like four propped-open books, with an enormous planted area in the centre. ‘Les Frigos’ is now a trendy artists’ quarter showing off impressive graffiti and mural art.

Cross the Seine from Rive Gauche, and you soon come to the capital’s ‘East Village’, another lesser-known section of the capital where new business is burgeoning. Buzzy Bastille and Oberkampf districts have always been firm favourites, but slightly further east there is a different atmosphere; lunch at Restaurant Pozada just off Boulevard Voltaire is a quiet, laid-back affair, and the gradual infiltration of modern architecture amid Haussmann’s designs is evident.

The Petite Ceinture originally wound its way past Ménilmontant in the 20th to Belleville and La Villette, and today, more of the line’s landmarks up here have been converted for modern use. La Flèche d’Or is a concert hall set in the former Charonne station, while the tree-lined Coulée Verte is a walkable green ‘corridor’ planted along a section of the disused tracks. This self-proclaimed village district is cosmopolitan, awash with artists’ colonies and independent artisan shops, and a true community lifestyle removed from the tourist haunts.

Head to OFF Paris Seine, the city’s first floating hotel, which is installed beside one of its oldest stations, Gare d’Austerlitz. This remarkable 58-room hotel barge – whose staff are called ‘crew members’ – resembles an oversized catamaran and is part of Paris’s riverside development scheme. Guests look over the Seine from the bedrooms or while lounging beside the plunge pool (complete with inflatable golden swan), and a swish cocktail and tapas bar is open to non-residents too.

The Sunset suite by designers Maurizio Galante and Tai Lancman wraps guests in a vivid all-orange space, even extending to the washbasins and bathtub, but staying here doesn’t mean skimping on history: Notre-Dame Cathedral and the Sainte-Chapelle are just a 15-minute riverside stroll west.

Another juxtaposition of old and new can be found at the Google Cultural Institute’s Lab, which is busy developing some of the most advanced digital technology at its headquarters in a 19th-century hôtel particulier in the 8th arrondissement. The contrast seems jarring – but when you understand the Lab’s mission to make cultural treasures available for online viewing and revolutionise the way society enjoys art, it makes perfect sense.

Their digitalisation of the artist Marc Chagall’s ceiling at the Palais Garnier opera house in Paris is astounding. When the team invited Chagall’s son to view the images, he revealed that his father had included his image as a baby in the painting, but that he had never been able to find out where. The Google team zoomed in on the images of the ceiling with perfect clarity and, after more than 50 years, the painted baby was finally revealed.

Allow time in your modern weekend to visit the Musée du Quai Branly-Jacques Chirac, the city’s most recent major museum and research centre. It features indigenous art from Africa, Asia, Oceania and the Americas, with an astounding 3,500 objects from its 450,000-strong collection on display at any given time.

At the end of your visit, the rooftop restaurant, Les Ombres, will beckon with its awe-inspiring view of the Eiffel Tower. The interior feels luxurious, with scarlet carpets and colossal vases of orchids, and chef Jean-François Oyon’s cuisine is inspired by dishes from around the globe. As the clock struck the hour, look through the glass roof as the Eiffel Tower begins its glorious light show. Even amid Paris’s thoroughly modern renaissance, its most traditional of icons is never out of reach.