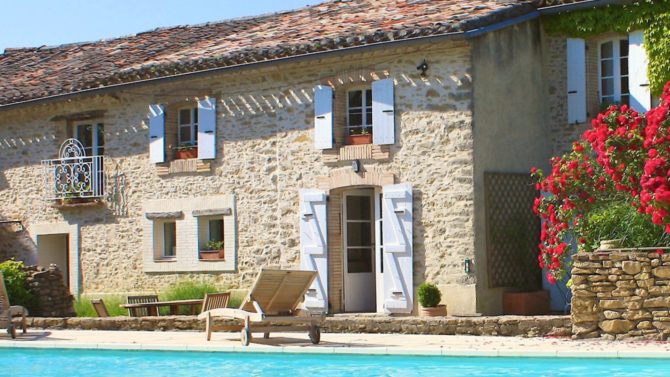 It’s not unusual these days for first-time buyers to find themselves priced out of the London market. An average overall sale price of £473,073 for a London property was recorded at the end of 2016, and getting a foot on the housing ladder in the capital has been beyond the reach of many for some time.

Back in 2001, 29-year-old Sam Cash was working as a TV producer in the city and hoped to swap his rented property for a home of his own. However, when he began his search for somewhere to buy he discovered that everything was too expensive for his budget, which is how he came to be a first-time buyer in France instead.

“I wasn’t intending to buy a house in France at all really, but it was a very happy accident,” says Sam. “I went to visit my sister who was studying near Carcassonne and she told me she’d seen this amazing house and that I ought to buy it. She talked me into going to see it, and although it was in a terrible state I fell in love with it. I knew it needed a lot of work but I was very encouraged by the asking price. I was frustrated by the London market, and while the money I had saved wasn’t enough to buy a property in the capital, it was enough for a deposit on a farmhouse in Aude.”

As a life-long Francophile, the prospect of buying a property in France was all the more appealing to Sam. “I’ve always loved France,” he says. “We went on camping holidays there as children, and I spent a year in Aix-en-Provence while studying French at university, so the idea of buying a French farmhouse wasn’t a complete leap into the dark. I just thought it was a good and sensible thing to do at the time, given the price.”

Sam was still busy working in London so he teamed up with his mother, who had always secretly wanted to buy a French farmhouse, and together they started to think about renovating the 19th-century mas.

“The property had a lot of potential to be turned into a very large house and that was always my plan from the beginning, but the problem was how I was going to afford it,” explains Sam. “The plan originally was to get a loan and do it all in one go – with a team of builders it was probably a year’s worth of work. However, when I got quotes from local builders they were all far too expensive, so I had to find another way of doing it. I didn’t know quite how I was going to tackle this building I’d bought almost on a whim.”

8 tips for renovating on a budget in France

Fortunately, Sam found the answer while he was driving around the local area. Inspired by a beautiful farmhouse he came across, he knocked on the door and the owner offered to show him around. Inside he found exactly what he was hoping to achieve in his own property, and asked who had carried out the work. And that’s when a new plan started to form.

“I discovered that one man had done all the work himself – he was a mason but could do pretty much anything – so I asked for his number and arranged to meet him,” remembers Sam. “I took him on and he worked with us for the next four years. We used to call him ‘le Hulk’ because he was a man of incredible strength; he’d put lintels in by himself and he re-pointed the whole house. He would send me an invoice every two months, so he was affordable out of my London salary, and I was able to space out the costs of labour and materials over the four years. We couldn’t have done it without him.”

Sam and his mother project-managed the renovation between them, taking it in turns to visit the house. His mother would go over to France for a week at a time, spending eight weeks of the year there, while Sam spent his six weeks of annual leave from work at the house along with his now-wife Emma. “It was hard work and you have to have a passion for it, but we all did,” says Sam. “Emma and I would go out and buy the materials on an ad hoc basis for whatever work was being done at the time, and we’d have to beg people in the builders’ yards to load everything into the back of the car. I’d wreck all of my hire cars!”

The small farmhouse was extended to create six bedrooms, five bathrooms, three reception rooms and two kitchens, and a swimming pool and dining terrace have since been added outside. The property was ready to rent to holidaymakers in 2005, and Sam and Emma held their wedding reception there in 2006.

The couple now have three children and have been living in the Canary Islands, where they run a catering business, since 2008, but are regular visitors to the house in France.

“We go there as much as we possibly can, which is probably about five times a year,” says Sam. “We always go for two weeks in the summer and at Easter, and we often go at New Year too. Emma and the children love it in France, and every holiday we have is different.”

The couple continue to rent the house out as holiday accommodation, managing everything from a distance with help from their team on the ground, which includes a cleaner, gardener, plumber, handyman and someone to maintain the swimming pool. The house has been very successful from a rental point of view, and is nearly always booked up a year in advance.

“One thing I was keen to get right when we did the renovation was to make every room a decent size, because often that’s not the case in holiday rental properties,” says Sam. “Every bedroom is large, and the inside living space flows into the garden and towards the pool – there’s a great sense of harmony. It was always my goal for the house to pay for itself and to be able to take on a new project every year to keep improving it, and I’ve achieved that.” Re-tiling the area around the swimming pool is this year’s project, and a new septic tank is on the cards for 2018.

When Sam lived in London, visiting the house involved an easy Ryanair flight from Stansted to Carcassonne, and while getting there is now a bit more complicated (a flight from Gran Canaria to Barcelona and then driving from there), the idea of selling is entirely out of the question.

“It’s non-negotiable!” says Sam immediately. “It was a crazy house to buy in the first place because I didn’t really have the money to do it up, but once I did start the work I enjoyed it so much that the idea of selling it is completely out of the question. I got married there and I have some incredible memories, so I’d never consider selling it.”